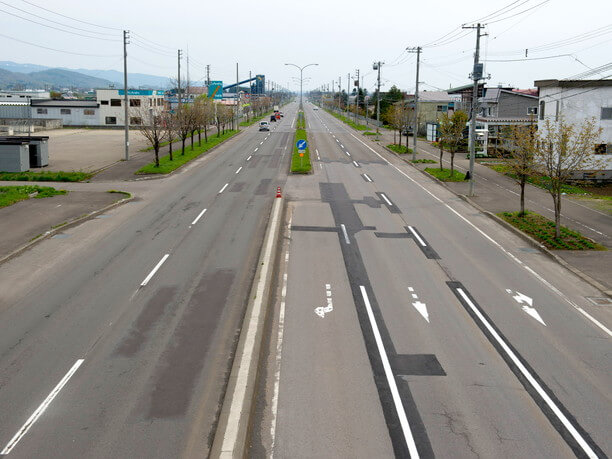 The straightest road in Japan runs nearly 18 miles in the middle of National Route 12 connecting Hokkaido’s Sapporo City and Asahikawa City, between Bibai City and Takigawa City. In the middle of Hokkaido, this straight road continues for 18 miles north to south. There are parts that are slightly bent, nonetheless, it is an exciting drive that extends from the north to Takikawa City, Sunagawa City, Naine Town, and Bibai City. Since it is a straight line, you don’t have to turn the steering wheel much!

The roads in Hokkaido are said to have a wide width and a lot of straight lines. This is because many of the main roads were made during the Meiji era pioneering era. It was easy to open a straight road so they made many! 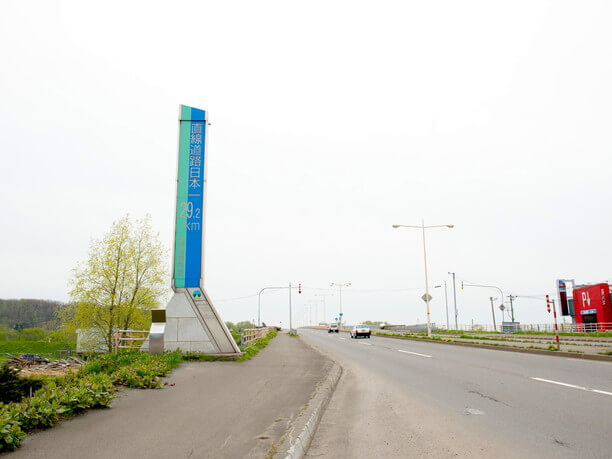 In order to promote the development of the Asahikawa region, the use of straight roads was started in 1886. This straight road was made because the construction restoration letter of 1889. It is still considered the longest straight road in Japan. 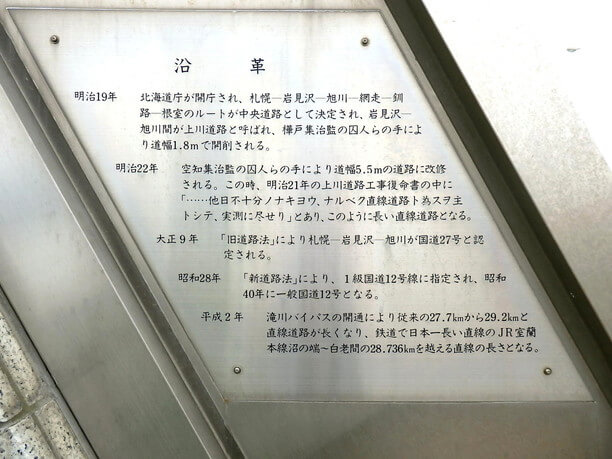 With the opening of Takigawa Bypass, it has grown from 17 miles to 18 miles and surpassed 17.5 miles between Numanohata statioin and Shirao station. It became the longest straight road in Japan.

A straight line running into Sunagawa-shi

This straight road begins at the intersection of Route 38 and Route 12 in Takikawa City. Although it enters Sunagawa city in less than five minutes by car, this part is a road that was extended later, in fact it is slightly bent. Although declaring 18 miles, the exact linear distance is 17 miles. 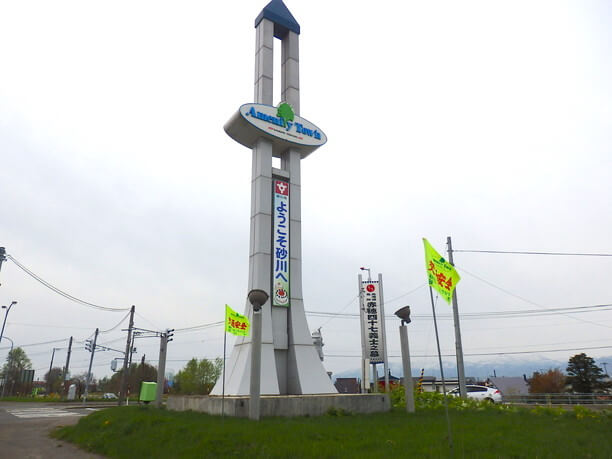 As you enter Sunagawa-city you will see a huge monument on your right. The statue and the sign of “Ako 47 Yoshiyuki Tomb” are hidden behind it! 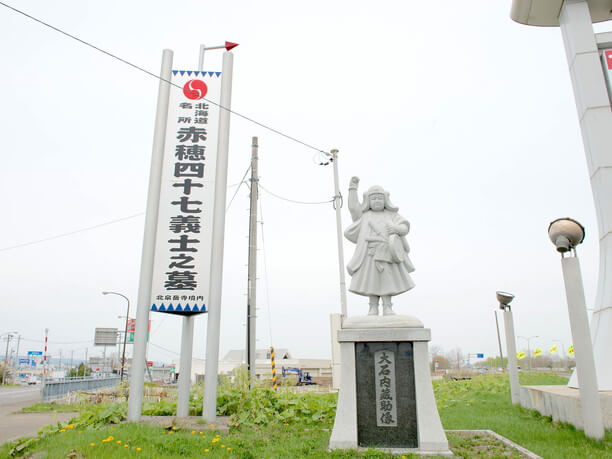 The statue is of Oishi Kuranosuke(大石内蔵助). There is a temple called Kita Izumidake dera which is receiving the spirit of Ako 47 people buried near there. The Hokkaido festival is held on December 14 every year. Sunagawa and Akoroshi have developed unexpected bonds. 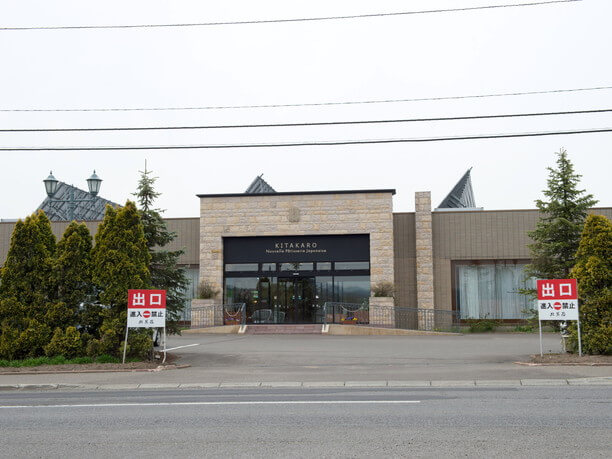 The confectionery manufacturer Kitakaro Sosawa main branch has its headquarters along the this road. It is a great place to stop for a break and eat soft serve ice cream or buy sweets? 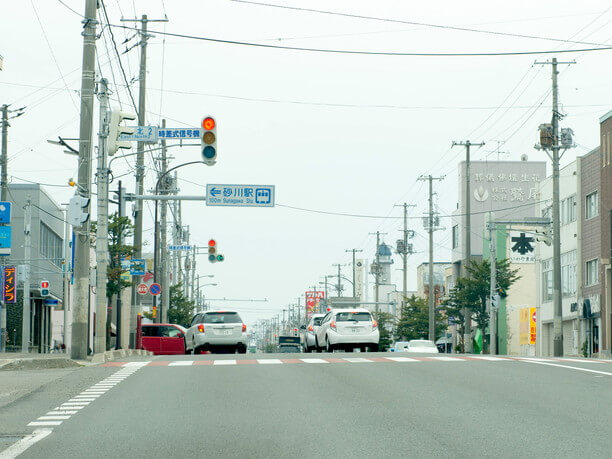 The area around Sunagawa station is bustling! It is in the center of Sunagawa city. There are some undulations and there are many cars so drive carefully.

The roadside station in Naie town is just the middle point!

You can enter Naie-cho which is the midpoint of Japan’s first straight road. The county sign tells of the special product of melon and the town Nanakamado. As you drive comfortably along a straight road with fewer cars and a wider road, you will see the monument at the midpoint. 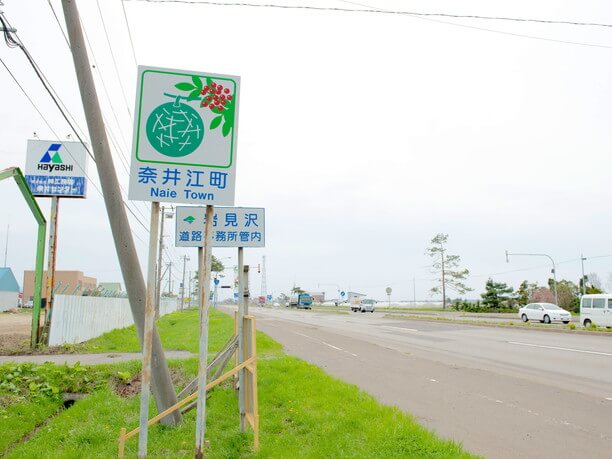 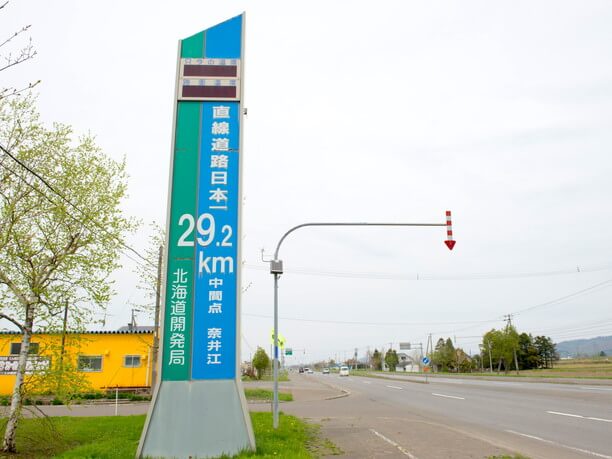 Turn left ahead of the monument and you will enter the only roadside station, “House Yarubi Naie.” House Yarubi naie was named after the town of the same name in Finland which is a friendship memorial city. 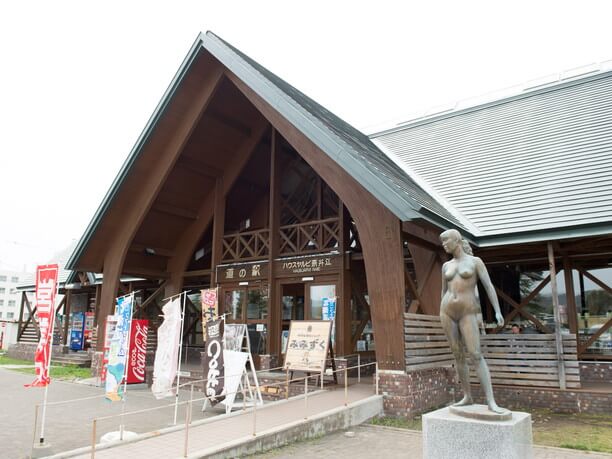 It is a log house building with an impressive large triangular roof with a Northern Europe atmosphere. It has a coffee shop and a souvenir shop inside. 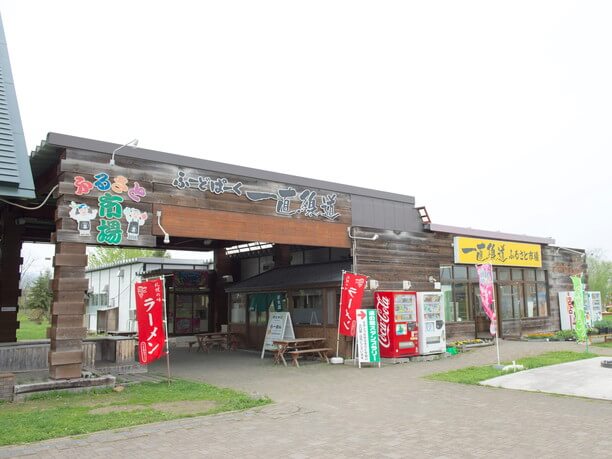 There is a direct sales place that sells special products and a food court adjacent to the road station, called the “straight road”.

Making a delicious stop on your run to Bibai city while

It is Bibai city where the straight road ends as you pass through Naie town. On the right there are paddy fields as far as you can see and mountain ranges are visible in the distance. It is a peaceful landscape! The JR railway parallel on the left-hand side runs parallel along the national road 12. 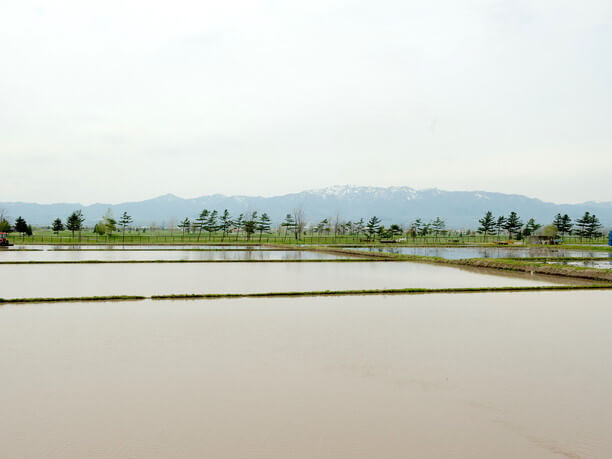 The building with the brick-colored wall that appears on the left is the “Sugiura Bakery.” It is a popular bakery shop that is also has a branch in the Daimaru Department Store in Sapporo. 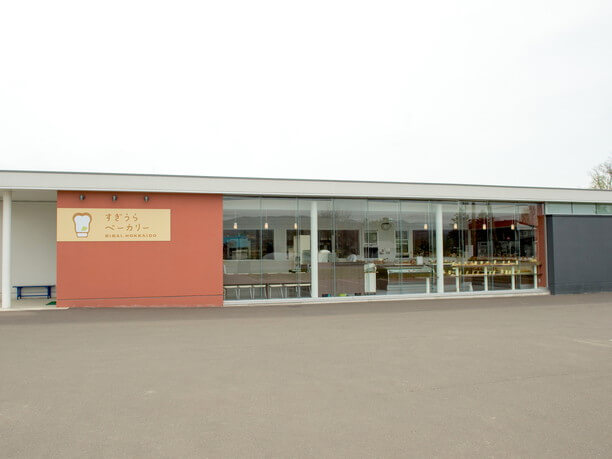 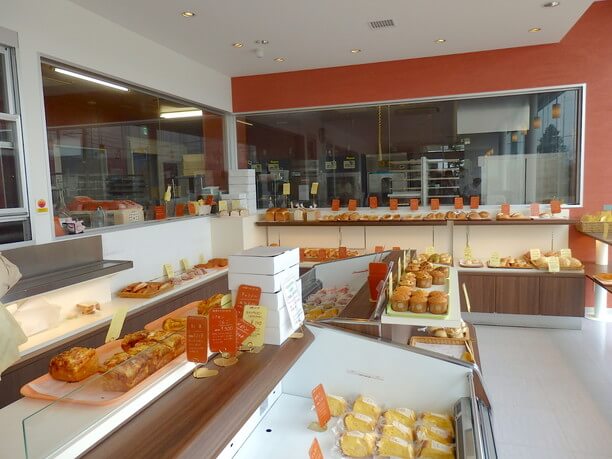 There are lots of yummy breads in the shop! Half of the items such as baguettes, soup buns and chiffon cakes are made with rice flour. 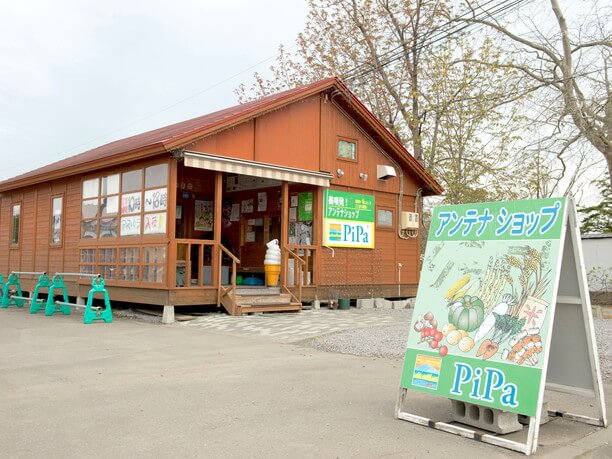 Above is a picture of the shop “PiPa.” It handles special products of Bibai city. Various products such as Bibai special production rice, taki yakitori, and takeshi are available. 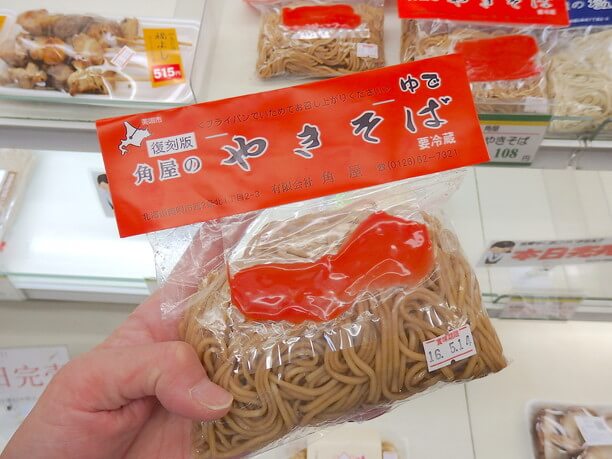 There is also a specialty “Kakuya no yaki soba. Their Yakitori has a vacuum pack so it can be a souvenir. 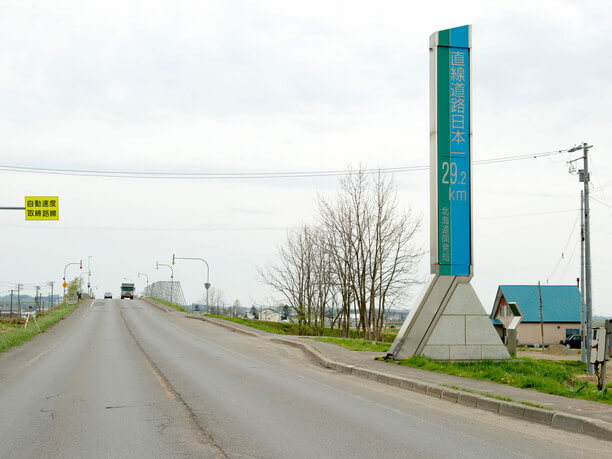 A monument with the same design as the starting point stands at the point where the straight road comes to an end. It seems that the straight line is still going on even after the monument. Perhaps the real end is on the overpass. 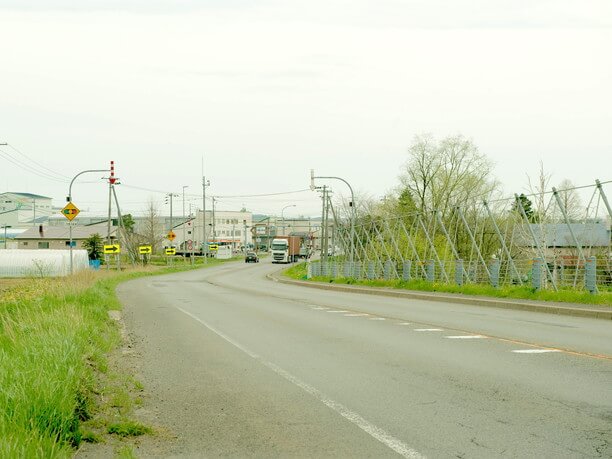 From here it turns into a curve, and the real straight line is over. Although there is some rise and change in the road width, the national highway 12 is the straightest road in Japan and is easy to travel in about 40 minutes.

It is a pleasant straight road making for a "relaxing drive" while sightseeing and shopping. Enjoy the magnificent scenery and spirit of the Tokachi and Kushiro district. Please check for details such as business hours and closures for holidays.

The longest straight road in Japan