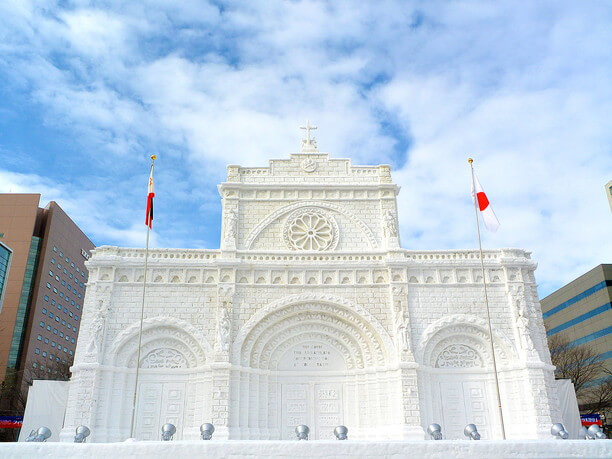 The sculptures used in the Sapporo Snow Festival (さっぽろ雪まつり) are made in approximately one week in early February. They are distributed to one of three venues amidst an overwhelming amount of snow. The sculptures include huge works but the attention to detail is always amazing. It is called “snow art!”
In addition to the snow art there is also plenty of “play space” including a skating rink, snow shoes area and a giant slide. This winter celebration is enjoyed by locals as well as tourists from China and around the world. 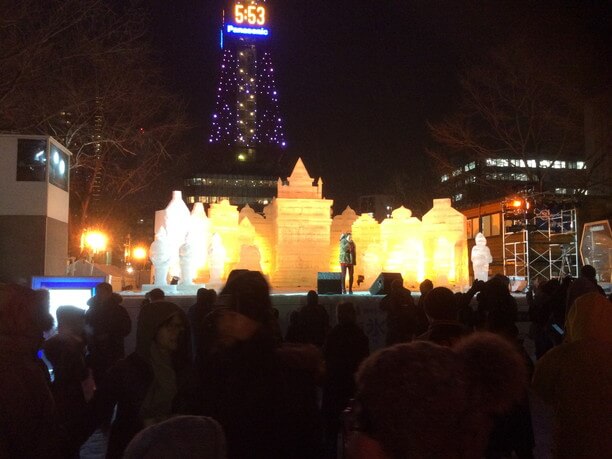 The festival is even more enjoyable if you know the history of it!

With over 60 years “longevity,” the Sapporo Snow Festival flourishes year after year!
Sapporo Snow Festival starting in the 1950’s. It was started by an art teacher. While teaching middle and high school students in the city, he produced six snow statues. In Addition to an exhibit of the statues he made, there was also various forms of entertainment, and a huge organized snowball fight. The first festival attracted more than 50,000 visitors. Its unexpected popularity prompted the second festival the following year. 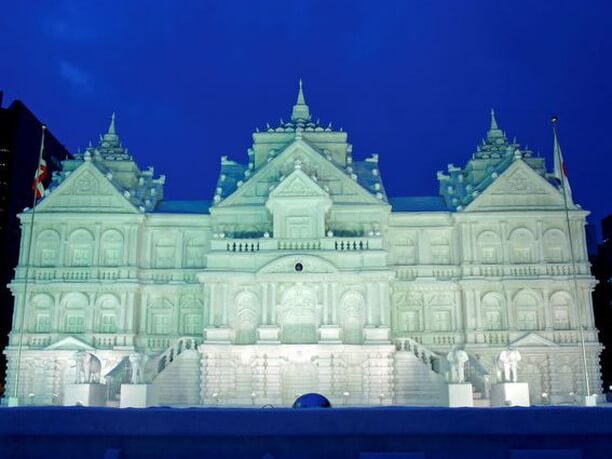 In 2009 it was celebrated as the 60th largest winter festival in the world. Since then it has grown considerably. Currently, between its 3 venues (Odori Park, Susukino, and Tsudomu) it has more than 2 million visitors each year! Regardless of nationality and culture, everyone can enjoy this amazing festival.

2 of the 3 venues have really great access to the city.

The festival Venues of Odori Park and Susukino are easily accessed in the city. Its 3rd venue, Tsudomu is a little out of the way. The Main venue is located at Odori Park, 1-12 Chome. They have dynamic sculptures exhibited throughout the entire Park. 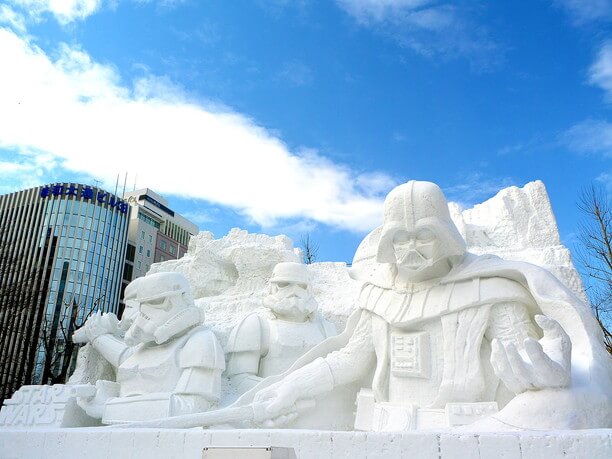 4-10 Chome has the biggest snow sculptures. The larger ones being as much as
45 feet in height.

6-and 11-Chome is where you can find some of the best Hokkaido and international cuisine. 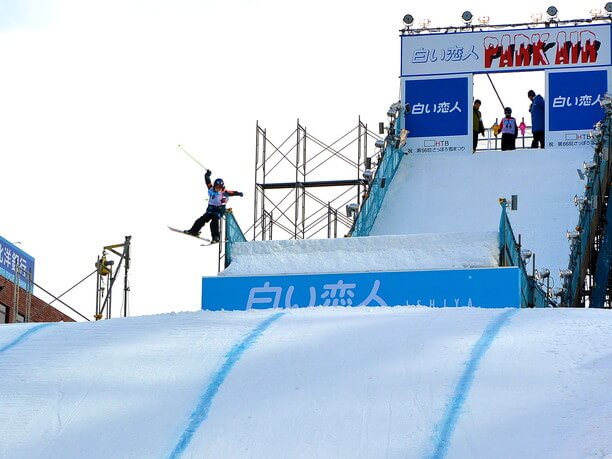 There is a skating rink located at 1-Chome and at 3-Chome there is a snowboard jump. 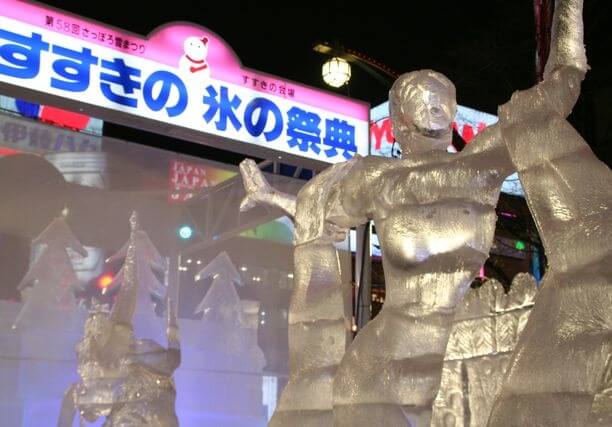 In the Susukino area the venue extends from Minami 4-jo to 7-jo, They have a pedestrian street to make it easy to access the venue. It is also known as the “Susukino ice Festival.” It was created near the hotel by the Cook. At this venue adults show up at the ice bar and enjoy a drink then can walk around and see the ice sculptures.

The tsudome area venue is for snow play!

If you are visiting the festival with your family, tsudome is recommended. 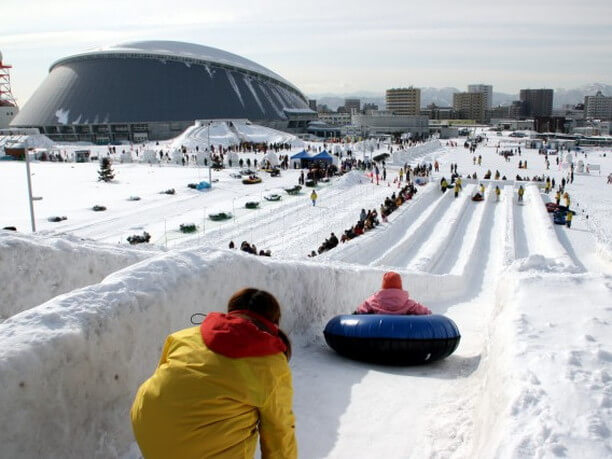 Every year thousands of children visit this venue to experience the maze or giant slide made from snow. The area is connected by an indoor space that has fun activities to enjoy. 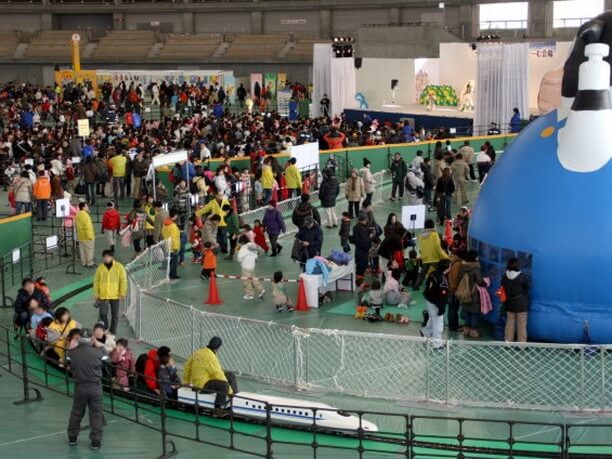 The dome is lined with booths serving food and drink and since it is an indoor space it is not affected by the weather. Although it is a little bit away from the city, You can get there from the subway Toho line, Sakae station. They have frequent shuttles to take you to the venue.

Together the self-defense force, citizens and tourists help create this winter celebration!

There are more than 200 statues of snow and ice produced in the three venues. The different sizes, and themes are a delight to see. They are all produced through the cooperation of the self-defense forces, citizens and tourist visitors. The large statue on the main ground is created by the self-defense 11 Corps Brigade from the North District. The design and collection of needed materials begins months before the festival starts. 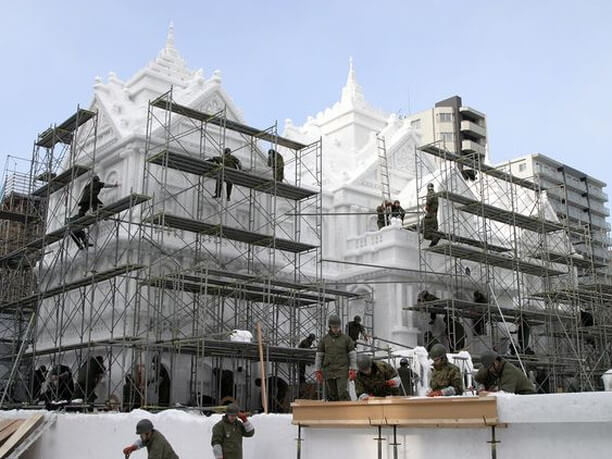 You can see by the picture there are a lot of people who work on the creation of these huge snow sculptures. 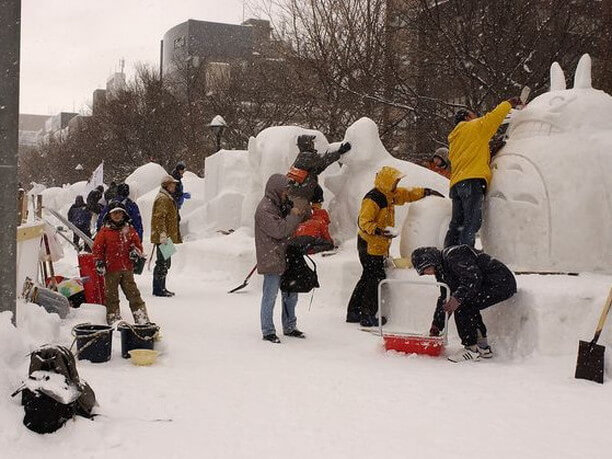 Citizens, as well as overseas visitors participate in the sculptures production.

The attractions include the special lighting at night!

After dark, they light up the venues and it has a totally different appearance than during the day. 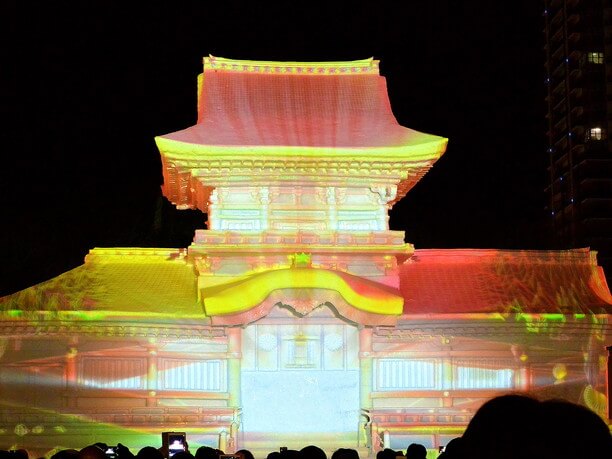 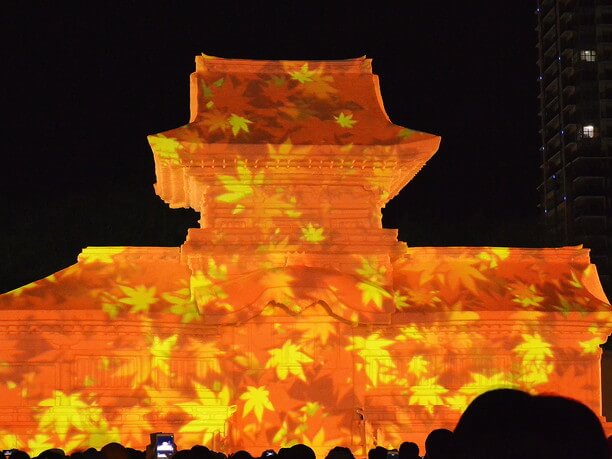 Early morning isn’t that popular of a time, so it is a good time if you want to avoid the crowds and don’t mind the cold!

Open
Early February (depending on time)

Open
Early February (depending on time)

Open
2 early (time period varies depending on the year)