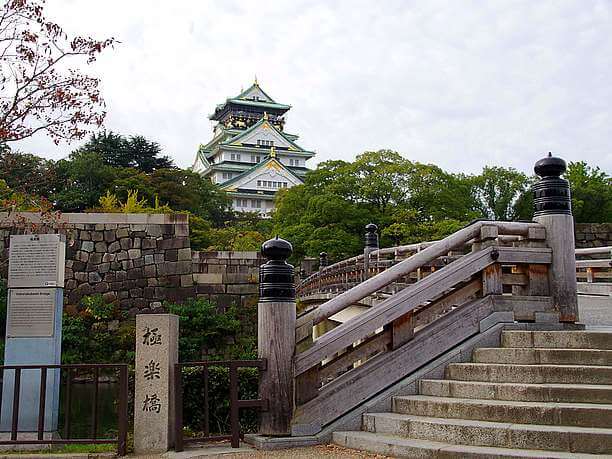 Osaka Castle Park(大阪城公園) is a famous tourist spot. The majority of the site is taken up by Osaka Castle, a special historic site in the country.

Many buildings were lost in the conflagration of the Meiji Restoration and during the Pacific war air raids, but the Castle, castle tower gate and the 13 buildings of Mont-oar are still there.

The Boulders and stone walls that remain are considered among the most attractive parts of the park.

You will be overwhelmed with the spaces for 64 homes that was created by Tokugawa for the people of West Japan and the Hokuriku area.
I’m going to introduce to you the attractions of Osaka Castle from the classic route from Ohteguchi.

Before heading out on the main route a little side trip is recommended.

Osaka Castle has four entrances. Using the main entrance means the difference between using a more walkable route or not.

The Nearest station is the subway Tanimachi 4-Chome station. It only takes a few minutes to walk to the main route from the station. So you have time to take a short detour and explore things like the beautiful stone wall of the outer moat.

You will find the beautiful terraced stone walls still standing. At one time there were 7 towers including one on every corner but only 6 remain. 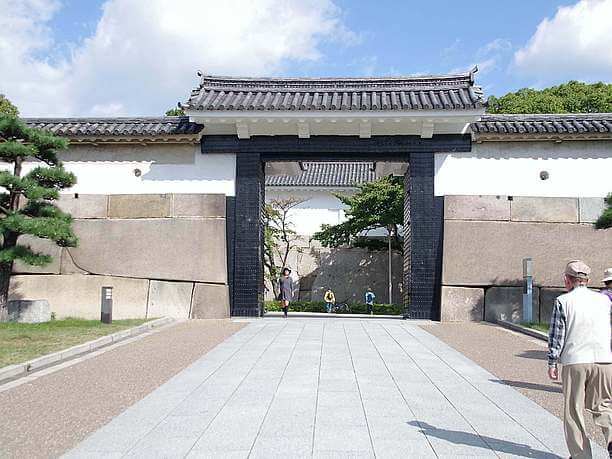 When you go to the main entrance (Otemon gate) (大手門), you see on the left side the Senganyagura (guard house) (千貫櫓) which was made in 1620. You will notice that it is made with different stone then the main entrance indicating that it was built at a different time.

Otemon gate was only for the Shoguns!

The front gate was finished in 1628. Today anyone can pass through this gate, but during the Edo period, only Shoguns were allowed to use it. This gate was used by Shogun #2 Hidetada(秀忠), #3 Iemitsu(家光), #14 Iemochi(家茂), and #15 Yoshinobu(慶喜). So when you pass through this gate today you can feel like a Shogun.

The Gate has a strange column. It has been repaired with a special seem that at first glance looks nearly impossible to create. 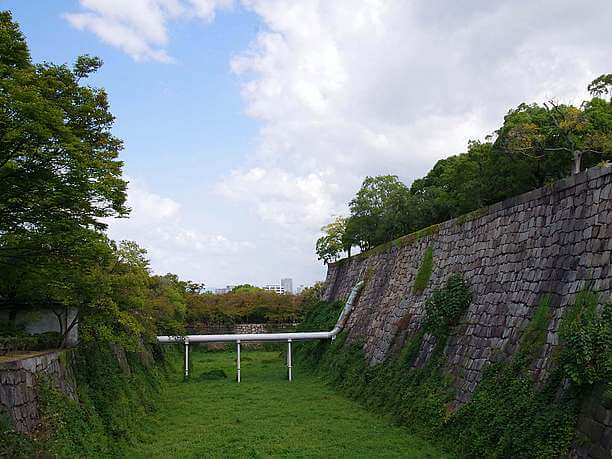 You will notice coming out from the castle ruins a big pipe that looks out of place. It’s the water supply pipe. It was needed because the Osaka Castle is located higher than the surrounding water supply reservoir. It is still in use today.

I could see the statue of Taiko-Hideyoshi at the Toyokuni shrine.

If you continue along the path going north you will head towards the Sakura-gate(桜門). If you go south you will come to the Hokoku shrine(豊国神社). Hokoku shrine is a Shinto shrine where Hideyoshi Toyotomi (豊臣秀吉) is remembered.
The statue was not here during Tokugawa period. It was put here during Meiji era around (1961) at its current location. 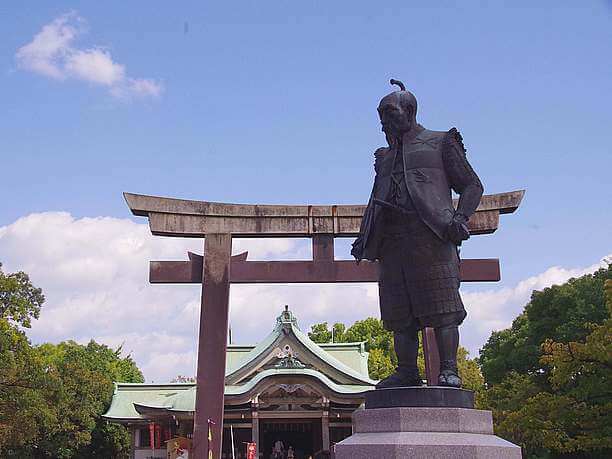 The Sakura gate is the main entrance of the Castle. It was rebuilt in 1887. 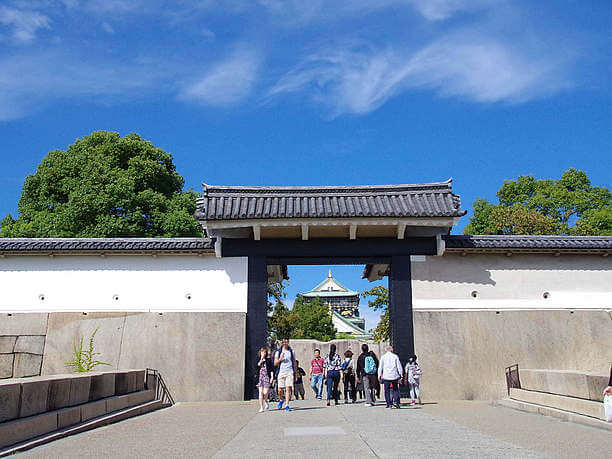 There are stone boulders on both sides of the gate. There is a dragon on the right and a tiger on the left. The boulder in front of the gate of the castle is a largest “octopus stone” that measures 38 feet wide and 18 feet in height.
It’s a wonder how they carried a stone this big. 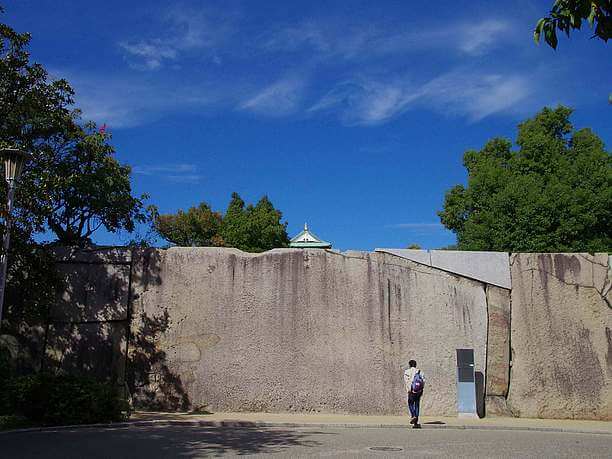 This is the main tower of Osaka Castle Sakura gate.

Take a look at Yamazato-maru!

You don’t want to miss Yamazato-maru (山里丸) on the north side of the Castle. There are a lot of stones at Osaka Castle, some of them have the signatures of daimyo. They were brought to Yamazato-maru where the collection of these stones created a place they called marked stone square. 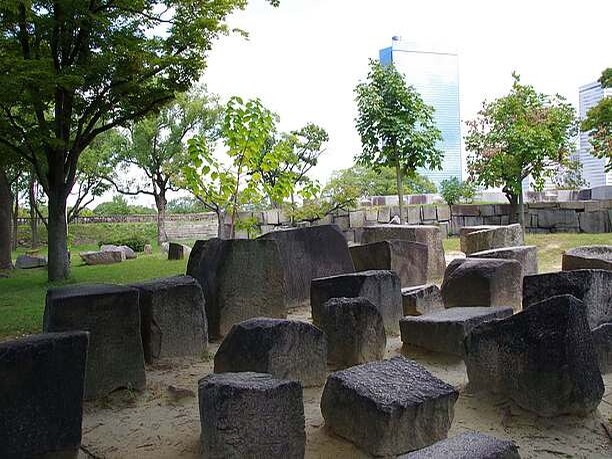 There is monument here that shouldn’t be forgotten. It’s where Toyotomi Hideyori and Yodo-Dono committed suicide in the Osaka summer mountain circle. The monument was built in 1997. 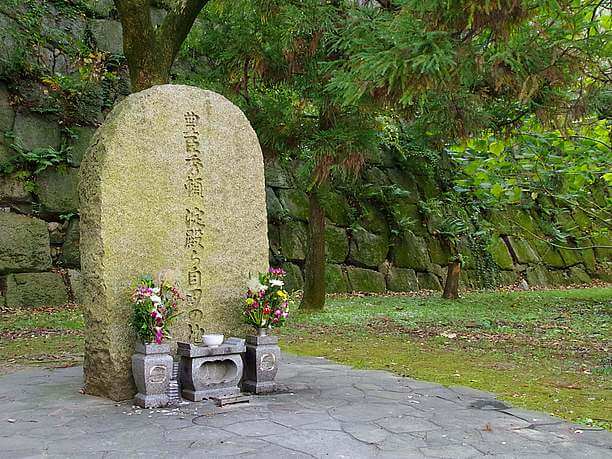 Gokuraku Bridge has high stone walls and a stone face.

The bridge across the moat to the North from the village is called Gokuraku Bridge(極楽橋). It was built in 1965. There is a painting of the Toyotomi portrayed on this covered bridge.
There is a beautiful view of Osaka Castle from here.

I now want to introduce the tallest stone of Osaka Castle.
Even though the base is under water, the actual height of this stone is about 105 feet high.
From Goraku Bridge through the front of Aoya gate, heading South is a good place to take a picture. There is a stone face on the East side of the castle, that is hard to see so look closely. 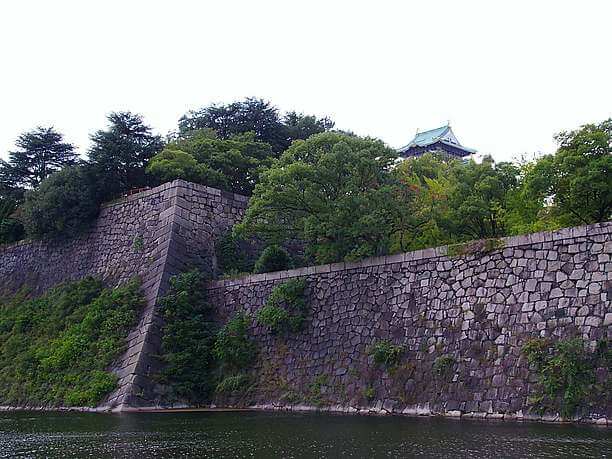 If you are coming from JR Osaka-Castle park station to Tenshukaku, you will go through Aoyamon To Gokuraku bridge. If so you need to read the directions in reverse.

If you love history and castles, you can spend all day at Osaka Castle Park. There are many venues still that I did not introduce. So please wear comfortable shoes and enjoy exploring on your own.