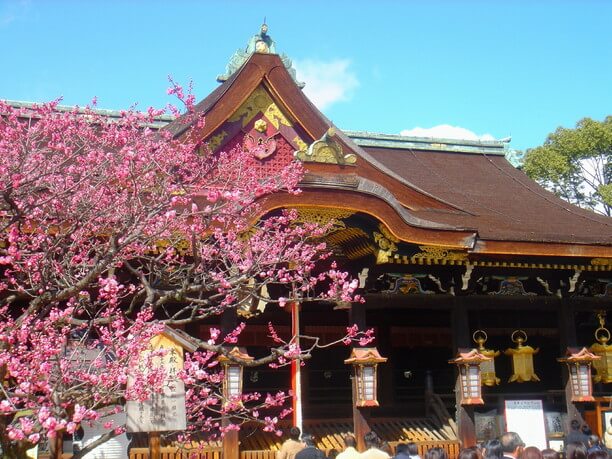 The Kitano Tenmangu Shrine that was build in honor of Sugawara no Michizane is the main shrine among over 12,000 tenmangu shrines and tenjin-ia shrines in Japan and it is the original place of the faith in Tenjin.Sugawara no Michizane is also famous as the god of academics, and the Shrine is a mecca to visit during the entrance examination season and for school trips.
The Kitano Tenmangu Shrine has historic places of Seven (7) Wonders that have a long history. Let’s explore the shrine grounds to find what they are! 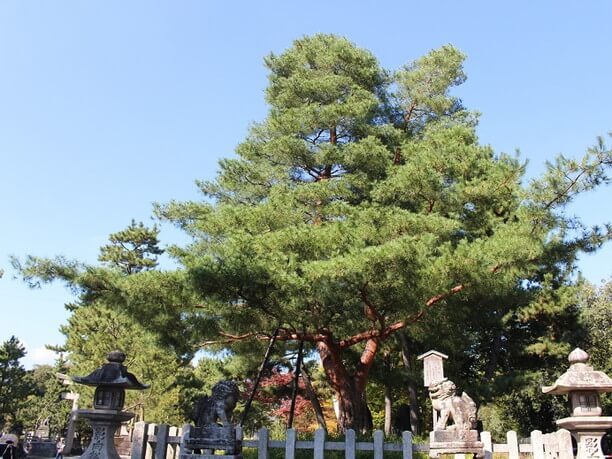 [Seven (7) Wonders #1] You’ll see a single pine tree surrounded by a stone fence on the right hand side when you cross the main torii gate on the front approach to the shrine.The pine tree is called “Yogo no matsu” pine tree. There is a legend that Tenjin-sama (Sugawara no Michizane) descends and composes a poem when the first snow piles up on the pine tree between the early winter and Setsubun (February 3rd ) every year.
The Kitano Tenmangu Shrine is thought to be a shrine of plum trees, but the shrine has a certain connection with pine trees and a pine tree is also depicted as the shrine crest.
[Seven (7) Wonders #2] The inner shrine is usually in the front after you pass the two-storied Ro-mon gate, but the Kitano Tenmangu Shrine’s inner shrine is slightly in the west-side and the Jinushi Jinja Shrine is in the front. 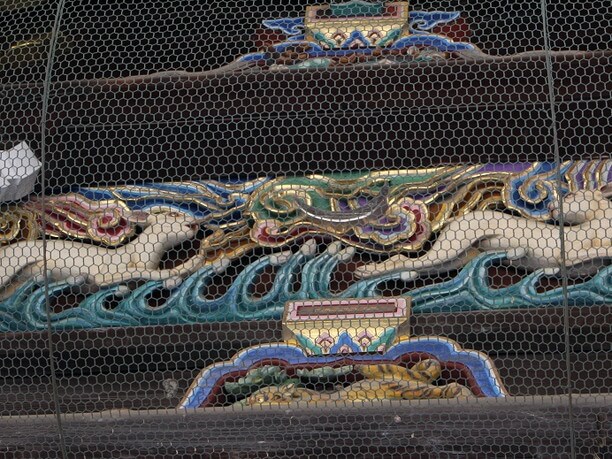 [Seven (7) Wonders #4] Across from the Sanko-mon Gate in the east-side, there is a garden lantern called “Daikokuten-no-toro (garden lantern of Mahakala –god of wealth).” They say that you will be free of financial worry if you place a small stone in Daikoku’s mouth and it stays there. 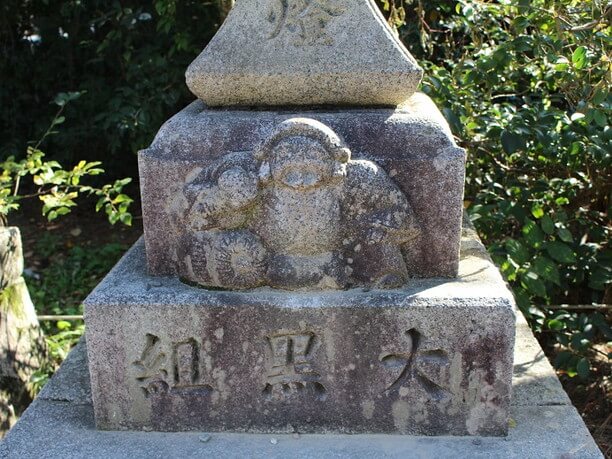 [Seven (7) Wonders #5] Most of the sacred cow statues are resting cows because of a legend that marked the beginning of the Dazaifu Tenmangu Shrine. According to the legend, the body of Michizane was to be transported by ox cart, but in the middle of the transit the cow suddenly stopped, rested on that spot and would not budge an inch. So the body had to be buried at a temple right there. That was how the Dazaifu Tenmangu Shrine started. That is why most of the cow statues on the shrine grounds are resting cows, but there is a standing cow statue on the ranma (transom) above the large bell in the front of the hall of worship, which is rare among the Tenmangu Shrines in Japan. Let’s see if you can find it. 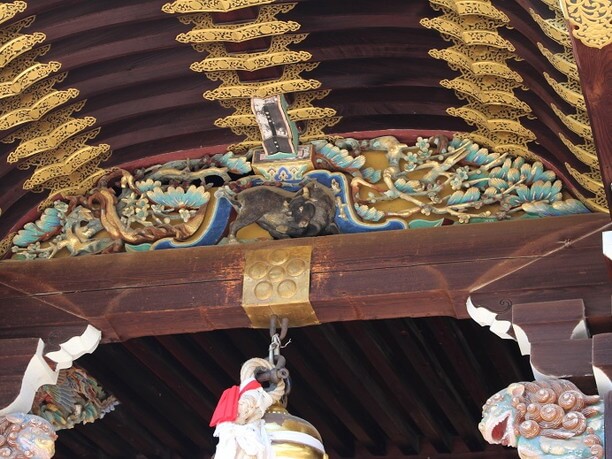 1,500 plum trees blossom in full glory in the shrine grounds 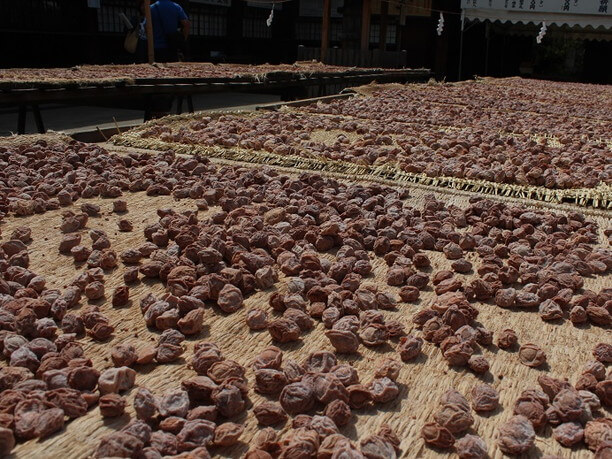 There are about 1,500 plum tress planted after Michizane who loved plum flowers. The plum garden is open in the plum season of February. You will enjoy seeing and appreciating beautiful plum trees including rare species such as Wakon-Bai, Koku-Bai, Zaron-Bai and Hi-no-Tsukasa. In the early spring, fragrance of plum flowers hangs in the air of the shrine grounds. Summer airing of plums is seen at the end of the rainy season. These are seasonal traditions of the Kitano Tenmangu Shrine.
In Heian period (794-1185) the Emperor Murakami had tea with plums and his illness was cured and that was how drying plums started. This dried plum is called “Daifuku-Bai”, and it is said to be good to put one dried plum in tea you drink on New Year’s Day to wish for sound health for the year to come.

Let’s get power from sacred cows.

Michizane was born in the year of the ox and there are a lot of legends and stories related to cows. Cows are regarded as messengers of Tenjin and you can see resting cow statues everywhere in the shrine grounds. They say that your ailments will be cured if you rub that part of your body and then rub the same part of the cow statue.
You will be smarter if you rub the head of the cow statue and a lot of students who are studying hard for the entrance examinations visit the shrine to have some extra luck. The facial expressions of the cow statues are cute and different. You’ll have fun checking each statue out. 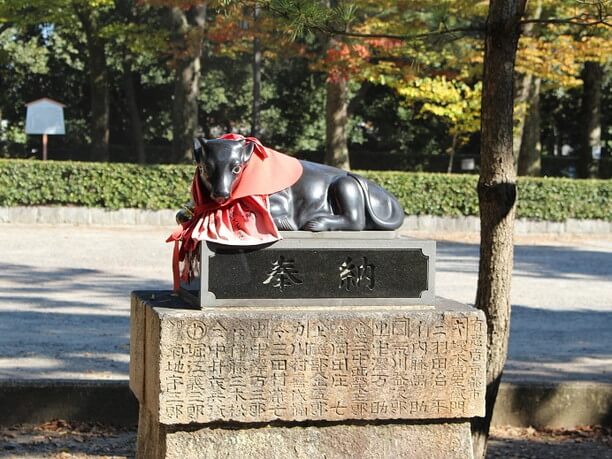 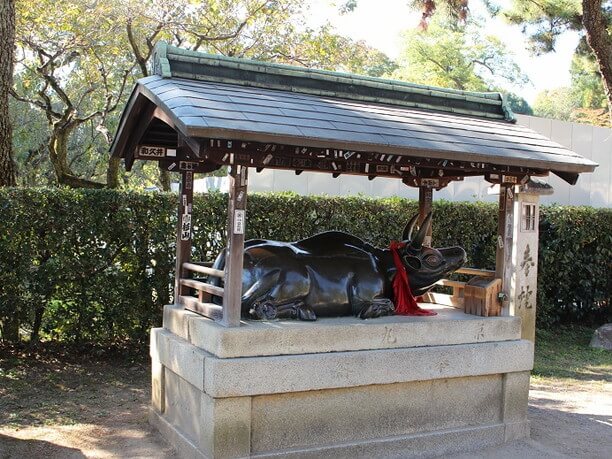 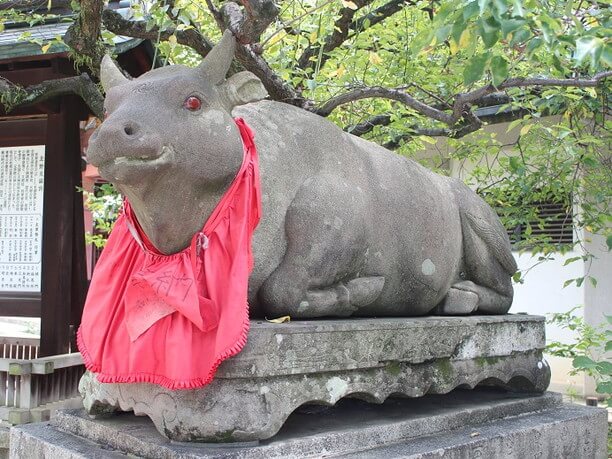 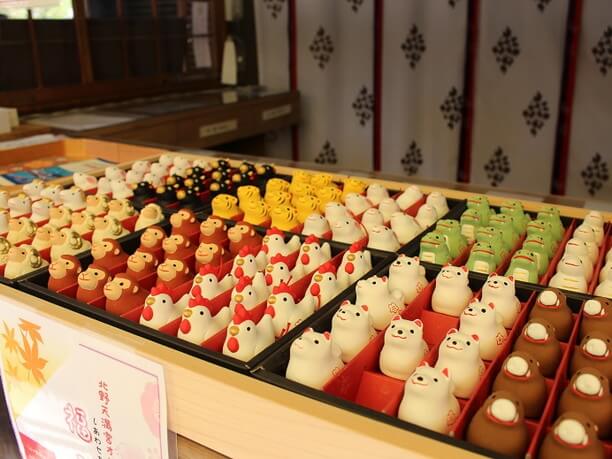 These cute animals are fortune-mikuji and zodiac earthenware animals that have o-mikuji written oracles inside. Each costs 500yen. They are popular among visitors from other countries because the written oracles are translated into foreign languages. 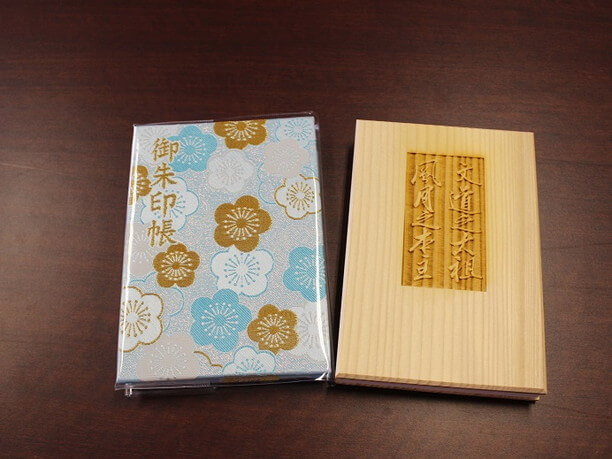 The original Goshuin-Cho books made their debut in September. One book has plum flowers on the cover and that is perfect for Tenjin. The other book is made out of wood, which is rare in Japan. It has a word “’Bundo-no-taiso
Fugetsu-no-honshu” to praise Tenjin inscribed on it.

Exploring the Shrine grounds while checking out each of “Kitano Tenmangu Shrine’s Seven Wonders” gives you different and new angles to enjoy the Shrine. Please try to see what you can find!

Parking lot
about 200 cars (free of charge, not available on 25th)