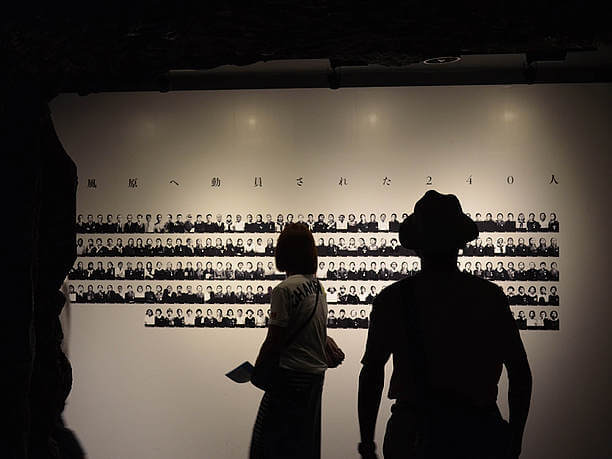 It was here that for 90 days during World War II that two hundred and twenty-two “Himeyuri students(ひめゆり学徒隊)” sometimes called “Lily Corps”, between the ages of 15 and 19 years old and their 18-year-old teacher had been recruited from 2 senior high schools in Naha to work as nurses. It gets its name from combining the names of the Alumni Journals “Hime” (princess) and “Yuri” (white lily). These 16-18 year old girls were suddenly thrust into the reality of a wartime hospital, with no training and no preparation.

Think it as if you were part of it 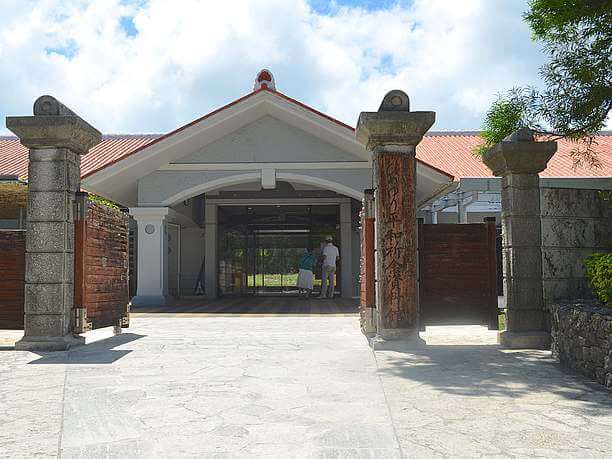 In 1989, Himeyuri Peace of Memorial Museum (ひめゆり平和祈念資料館) opened to pay respects to these girls who played an important and horrific role as the Battle of Okinawa. Survivors of the Himeyuri students wanted to create a memorial so as to remind us of what happened to them.

In 2004, in recognition of the 60-year post-war anniversary the museum underwent a major renovation. The monument and exhibition were created in order to try to convey clearly the reality of war to the younger generation.
The new exhibit consists of five exhibitions and a multi-purpose hall. You can learn of the students’ actual experience through their video testimony.

Just ordinary girls who had to fight 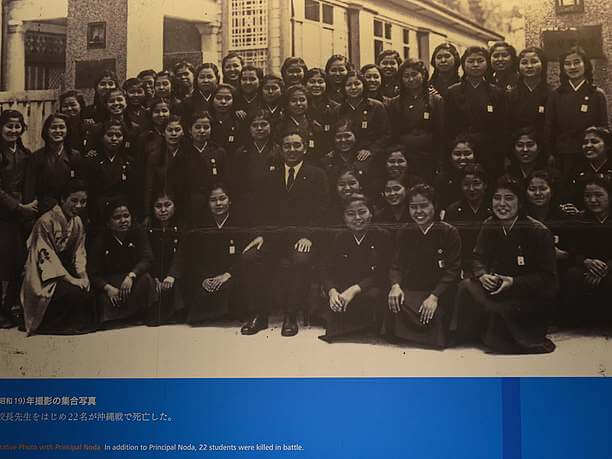 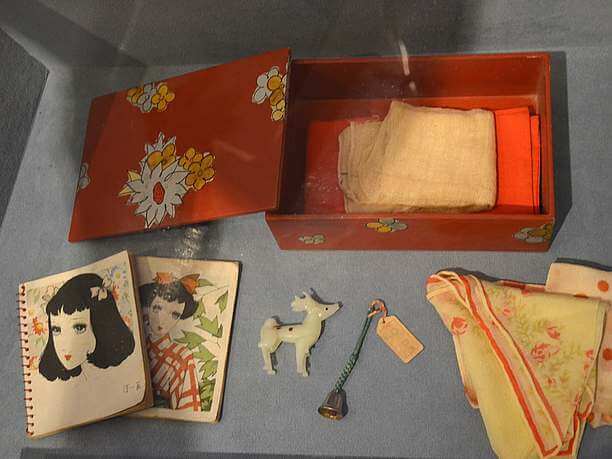 The first exhibition room: “Youth of Himeyuri (ひめゆりの青春)”
Even though 70 years separates the youth of the survivors and today’s youth, there really isn’t that much difference between them.

Himeyuri students dreamed of their future, getting married and of course, their education.

At the time of the survivors’ youth, they were being taught to dedicate their lives to the country. According to Yoshiko Shimabukuro (the director of the museum) who was at that time 17 years old, ‘we were not afraid, we thought we would only be gone for a week and that since we would be working in the hospital, no harm would come to us”.

The schoolgirls confused their ideal with reality 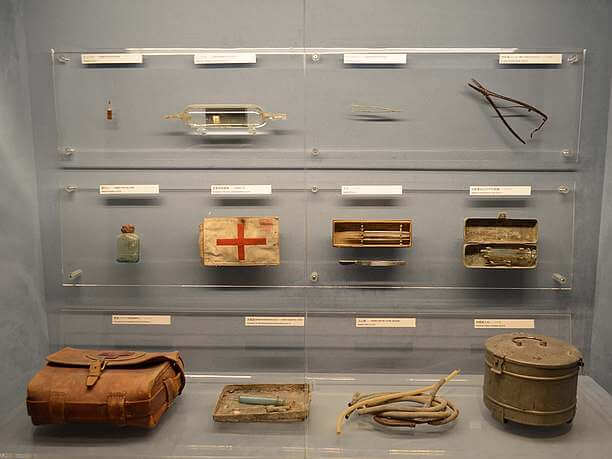 The second exhibition room: “Battlefield of Himeyuri (ひめゆりの戦場)”.
Ms. Shimabukuro went on to say that seeing all the things in the exhibit makes her feel like it was only yesterday. “It was difficult” she said, “one minute a person would be alive then the next they had died due to excessive bleeding. I realized this is what war is”. 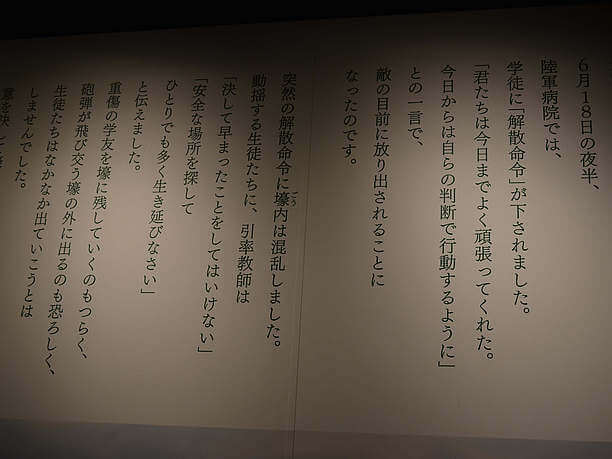 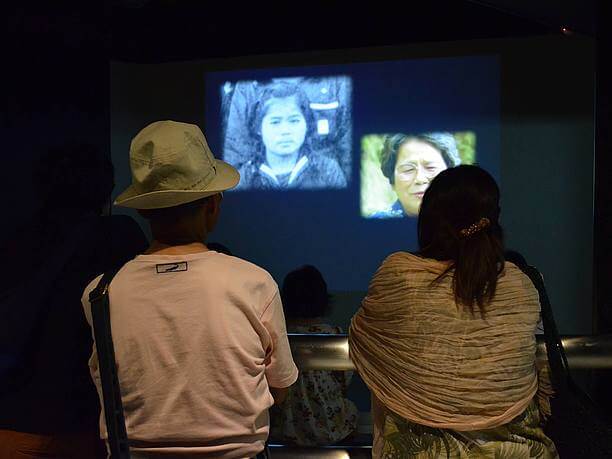 The third exhibition room: “Dissolution instruction and the wandering of death (解散命令と死の彷徨)”. On May 25, students received orders to move to south. On June 18, they were given orders to disand. They are thrown out into the actual battlefield while artillery was being fired overhead. “It was hell”.

You can watch video testimonies of the survivors’ experiences by the US military in this room.

If I was born there 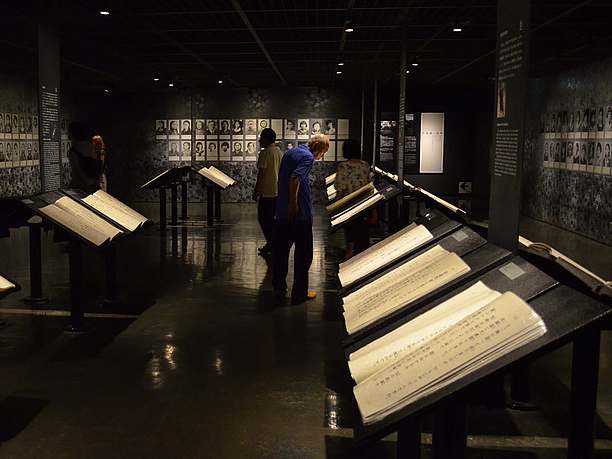 The fourth exhibition room: “Requiem (鎮魂)”.
This is a space to mourn the schoolgirls and teacher who lost their lives in the Battle of Okinawa. The room is filled with more than 200 testimonies from survivors and portraits of the deceased cover the walls. 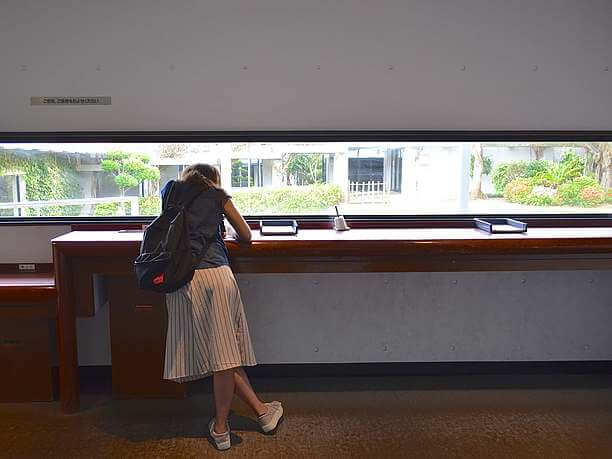 Himeyuri Peace Museum is a place to find out about the war, it is inside of us that we must make a difference and live in peace.

Passing the baton to the next generation

Ms. Shimabukuro said, “I asked my friends in a dream, ‘I could not find you. Where were you?’ But they would not say anything. Then I woke up with the feeling of guilt for surviving. We survivors found the ways to express our feelings about what happened when the Peace Memorial Museum opened”.
“Whatever it is, war is not good.” 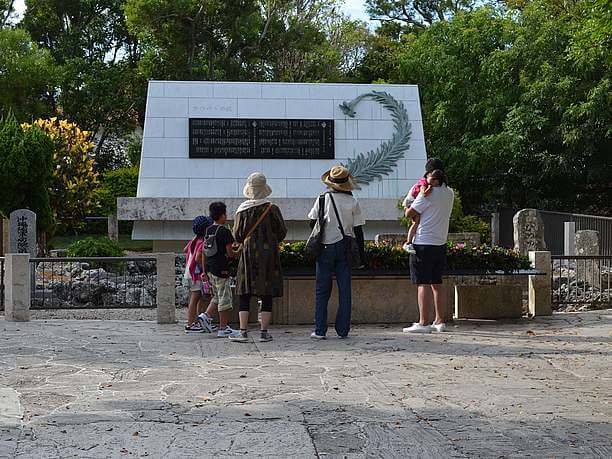 スマートポイント
1. Behind the tower of Himeyuri is a boardwalk nestled in a little forest. I recommend sitting on a bench at this location as you look back at the feelings you have after leaving the museum.
2. If 20 or more people are in your group, group rates will apply:
Group Rates [adult] 280 yen [high school students] 190 yen
[Elementary and junior high school students] 100 yen