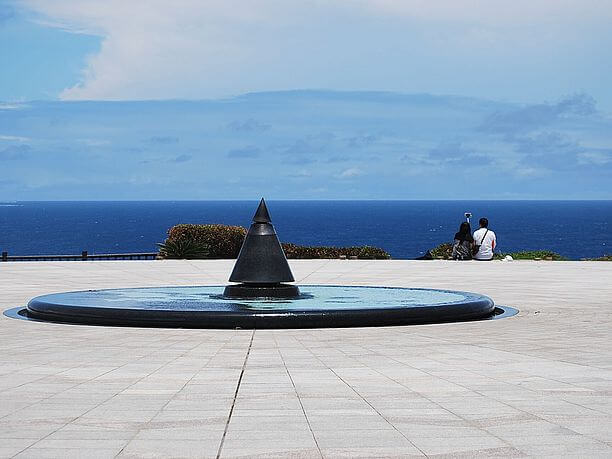 There is an amazing view here of the sky and sparkling ocean
spreading blue as far as the eye can see. 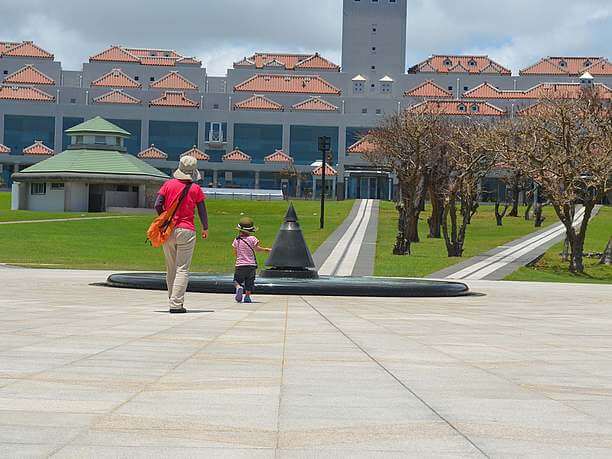 The red tiles and white walls of the building standing on top of the small hill looking down at the Pacific Ocean is also quite impressive.

This facility in Itoman Mabuni (Mabuni) which opened in 1975. It is the first museum opened in Japan dedicated to the philosophy of peace.

One of the main focuses of the museum is giving tribute to the soldiers of the Battle of Okinawa. 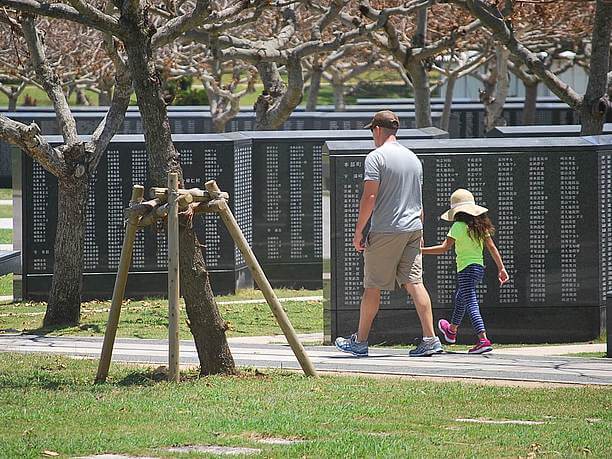 There is a wonderful open green park area where you can walk.

Here you will find “The Cornerstone of Peace” (Ishichi) facing the sea. It doesn’t distinguish friend or foe, nationality, whether military or civilian, it equally serves all as a bridge of world peace. On it is inscribed the name of 240,00 people killed in the war. 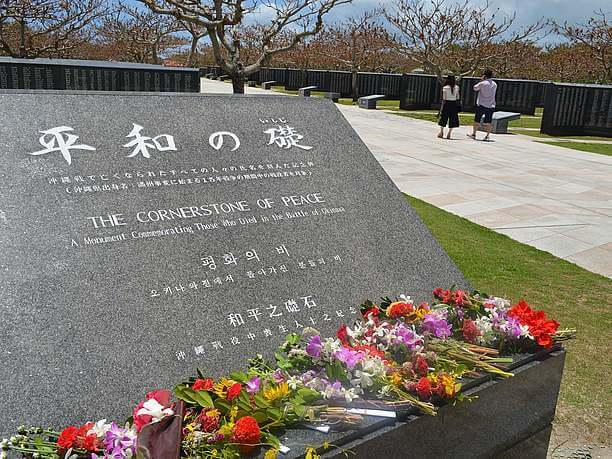 The Cornerstone of Peace

This memorial as well as the Okinawa peace memorial chapel, and the Shimamori tower Noriyuki are visited every day by many students on school trips and individual travelers.

Though it has only been 70 years since the end of the war, This memorial is trying to make it a thing of the distant past,

Visitors are asked when walking in this space to remember the past but look forward to a future of Peace.

The Permanent Exhibition Room of Battle of Okinawa 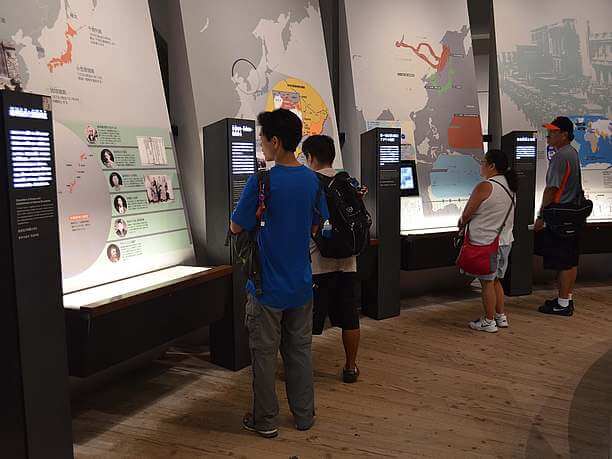 The Permanent Exhibition Room is on the second floor and consists of five exhibition rooms.

The exhibitions remind us of the more than 200,000 people who lost their life and also serves to teach us about and remember parts of the Okinawa culture and natural beauty that were lost in the war. 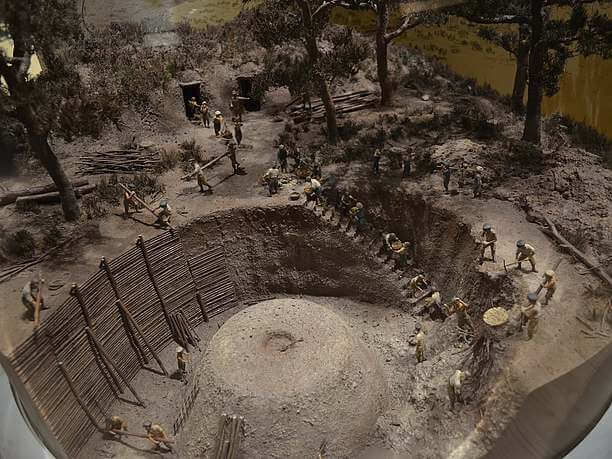 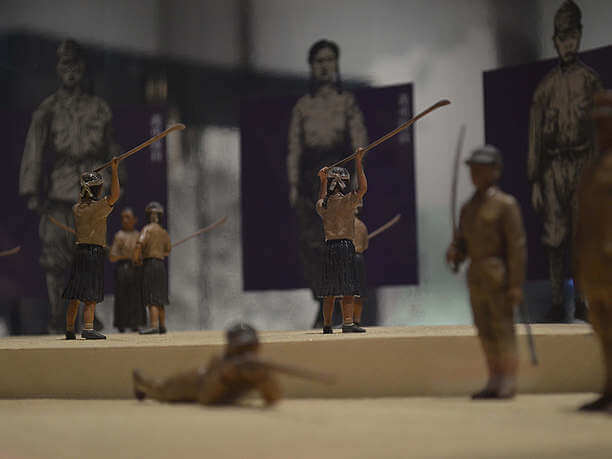 The first exhibition room is called the “Road to the Battle of Okinawa.”

On display is the history of the circumstances that lead up to the Battle of Okinawa, the story of Ryukyu, and how it became part of Japan.

The second exhibition room is called ” Battle of Okinawa,” Typhoon of Steel ” Here a 3-dimensional map and image of the Battle of Okinawa are on display. It tries to draw from the point of view of the residents. “The typhoon of steel” section shows actual material from the naval bombing raids and show how the bombardment changed the idyllic island landscape into burnt ruins. 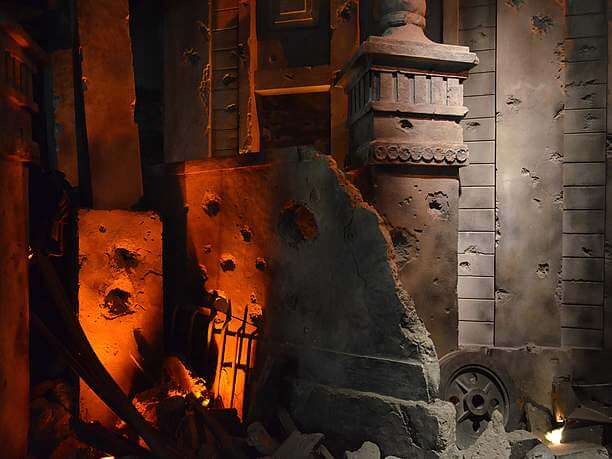 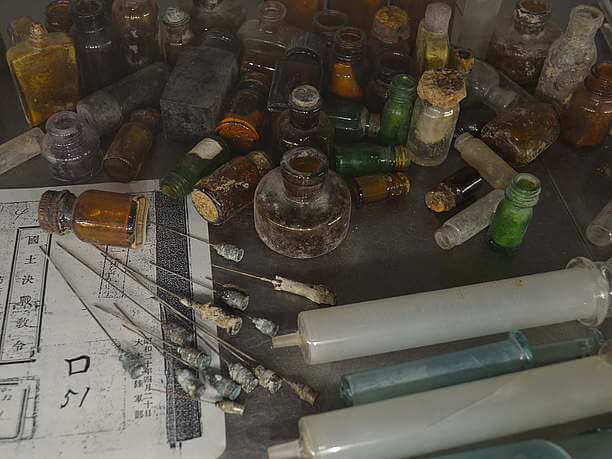 Items of the residents of Okinawa that were recovered


Continued in the third exhibition room: 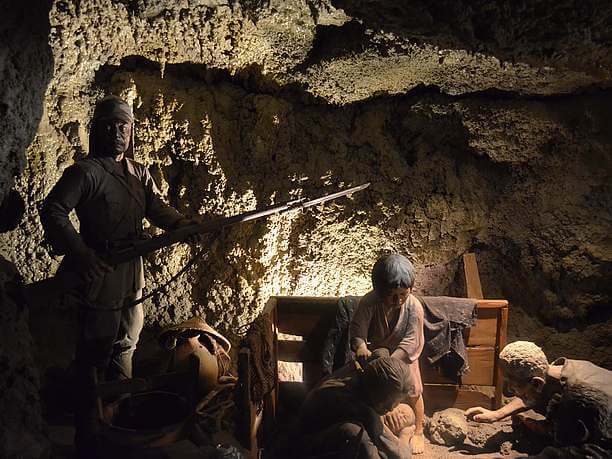 The war as seen by residents of Okinawa 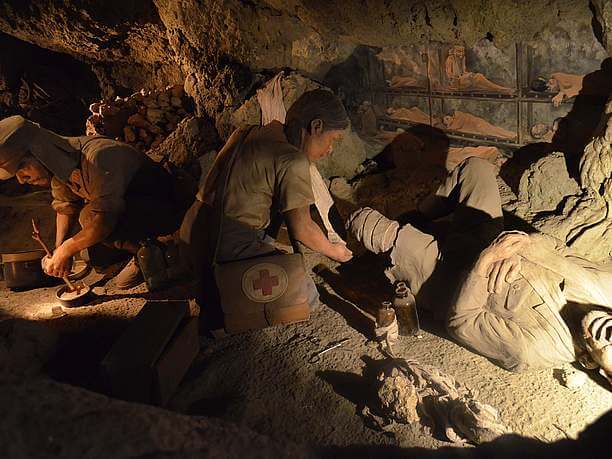 The Battle of Shuri was a battle between troops of the Japanese army versus the United States Army. It was a fierce battle. When Shuri fell residents and soldiers were forced under ground. This is depicted in the exhibit with a mixture of wax dolls and actual war materials. 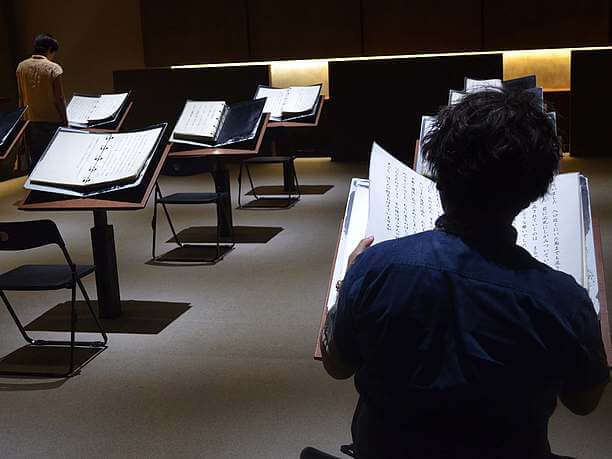 You can read pages of testimony from the residents of Okinawa about the war. 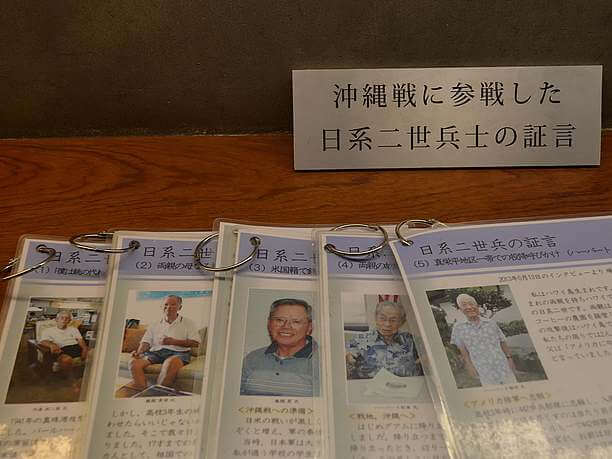 You can know through letters and video footage the vivid experience of the people who survived the Battle of Okinawa.

One testimony reads: “There has not been nearly enough left of the real material to convey the appearance of this island before it was burned in the war.”

The Fifth exhibition room:
“The cornerstone of the Pacific Ocean” 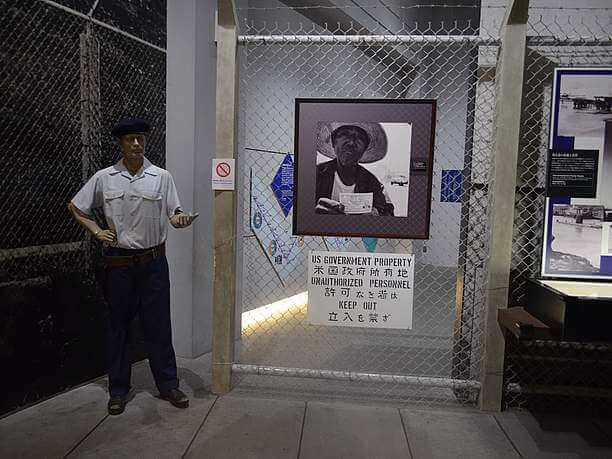 Even after the war was finished many people were held in prison camps and were not allowed to return home. American colonial period extended another 27 years, and military occupation of Okinawa continues today.

“From now to the future:”
Consider the future of the world 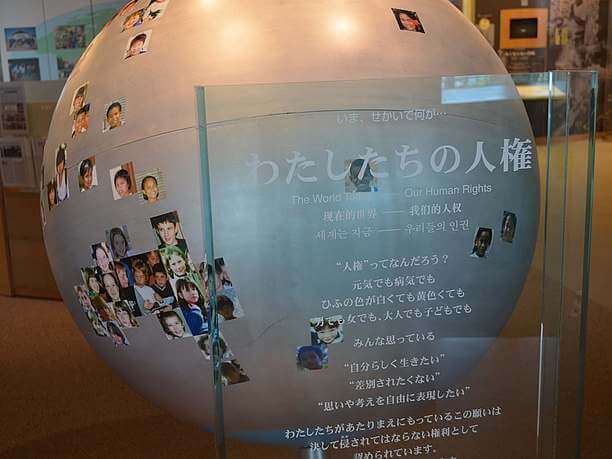 It is “a children’s play exhibition room” that has been installed for the purpose of helping to imagine peace in the world.

Based on the idea that we can mutually find the same place, three of the corners are set up so we can be in touch with peace in nature. 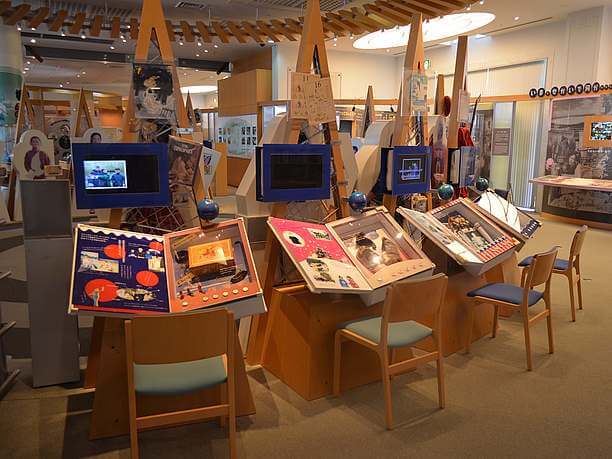 Children of 18 different countries in the school situation get to teach from things like the play “Children of Nuchidu treasure – the world!” on how to live without war and conflict, such as the bullying problem.

It gets you thinking how we can resolve the world’s problems.

It reminds us what we can do to help create a future where we can enjoy peace.

“Seeing the difference in the world” 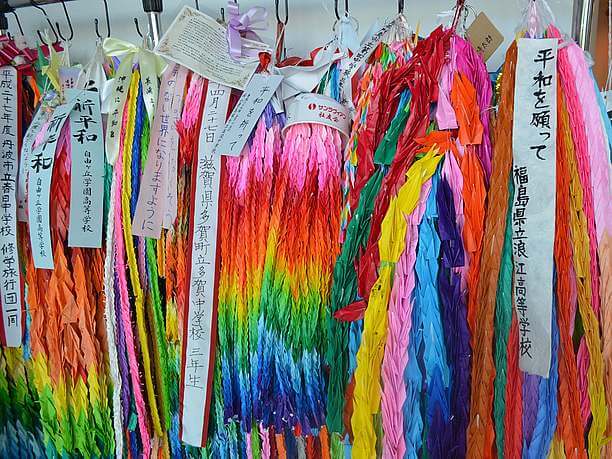 Before visiting I did not know the attitude of people of Okinawa was so good!

They genuinely have an understanding and feeling of the importance of peace and happiness.

This may seem to be such a favorable reaction, but according to my survey, it is the reaction that a vast majority of the visitors share. 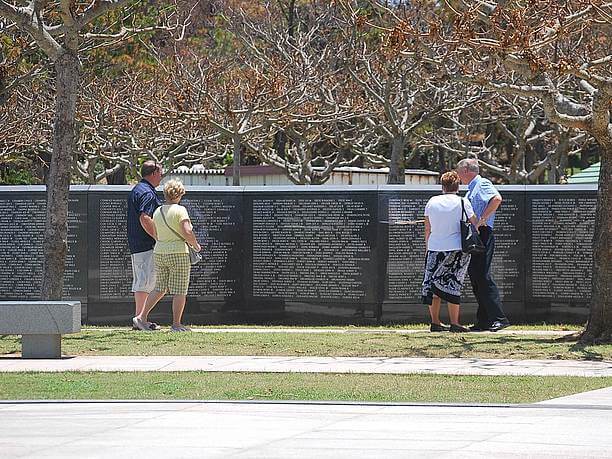 It is a fact that there will be a difference view of circumstances of the Battle of Okinawa depending on who you ask.

It is also a fact that the Okinawa Prefectural Peace Memorial Museum is a special place that goes a long way in preserving the memories of the past while creating an opportunity for a positive future of world peace and happiness.

In information library at the back of the child process exhibition room on the first floor, you can watch around 300 videos where residents talk to their children and grandchildren of their experience of the war in Okinawa. Please take a look.