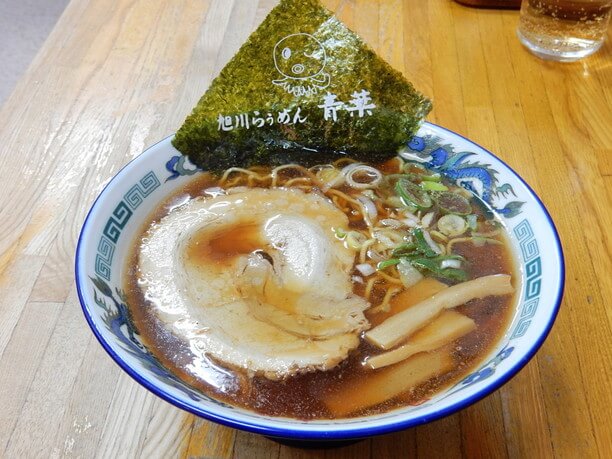 Aoba started from a stand in 1947. It is one of the long-established stores that is said to be one of the fathers of Asahikawa Ramen. From the beginning, Mr. Yoshiya Murayama’s (村山吉弥)soup made the store famous! Mr. Yuichi Murayama （村上有一）(the current shop owner) firmly keeps its original taste.

Even now that the name has become famous, its taste has not changed from the beginning. The original soy sauce noodles (750 yen) has a simple tasting soup and noodles.
If you are looking for genuine Asahikawa Ramen, it is a store you want to visit.

Enjoy one of the original Asahikawa ramens!

Aoba is about 5 minutes on foot from JR Asahikawa station. A bright orange curtain on a busy street is the mark of this shop. 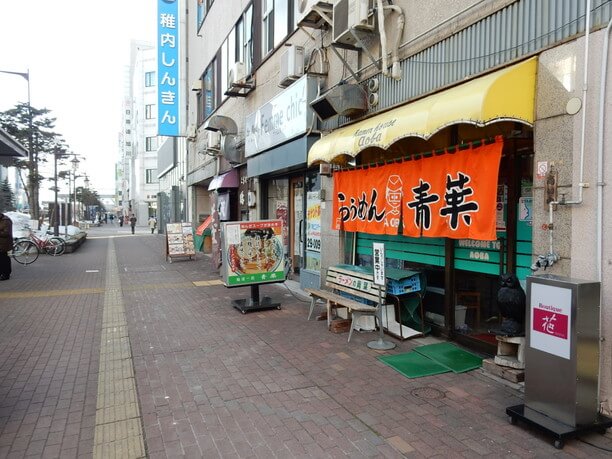 Inside, it is a simple store with a counter and small table seats. Though it is small, it has a dignified style because this store has steadily continued during its long history. 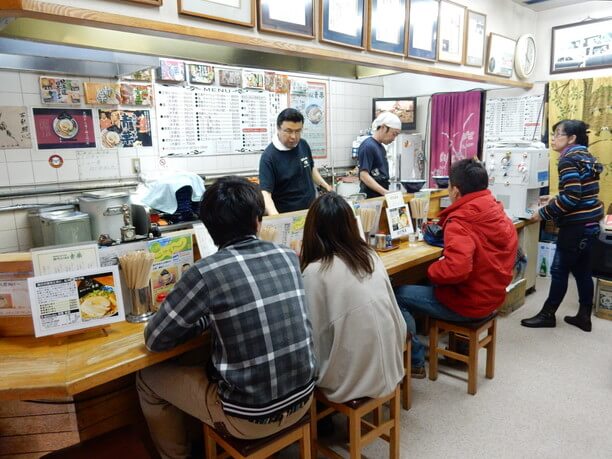 It was founded soon after the war. It started with sales on the street. The technique which Yoshiya Murayama started features a meat and fish soup, and boiled noodles. He invented his ramen by trial and error and it still remains as a characteristic Asahikawa ramen, and it is known as one of the originals. The shopkeeper Mr. Yuichi Murayama says with a smile, “Try tasting it first, without adding anything extra, delicious things, do not need any extra care!

The secret to their soup is a mellow and full taste!

“Soup is the heart, noodles are the blood, if these two are perfectly matched, there is no need for extra things, because it is simple.” Murayama says. So, in a bowl, there is only a minimal amount of toppings such as, nori seaweed, and leeks.

This soup has been made the same way since the shop opened, so they are confident of the taste. Added to the soup are chicken eggs, pig bones, kelp, boiled fish, and even vegetables. They cook it on a low fire for half the day, taking care not to let it boil. The soup is deep and mellow in taste and has a fine flavor. The taste of the refreshing soy sauce works its way in as you continue to eat the soup.

The noodles which are also expressed as the “blood of ramen,” are of course home-made. They are made by just adding a little water while kneading up the dough. 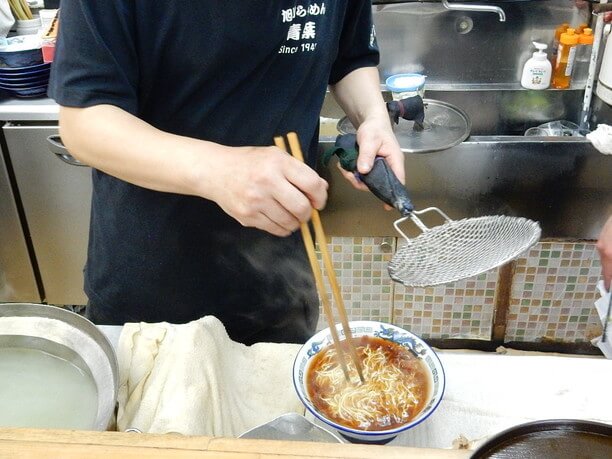 They are boiled right up to the time they are put it in the soup. Then they are immediately served to the customer, while the ingredients are uniting in the bowl. 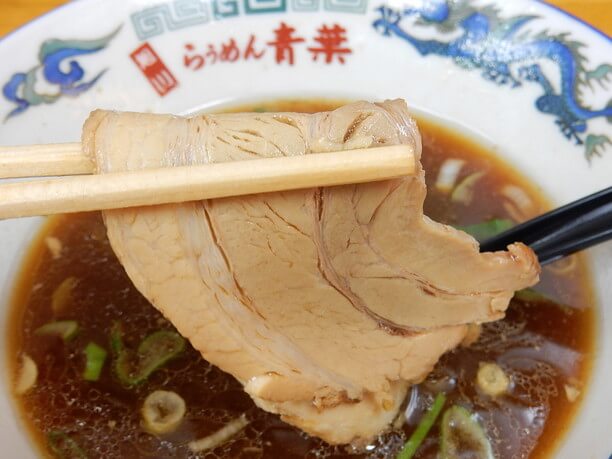 Home-roasted pork filets and bamboo shoot are added with simple seasoning that does not disturb the flavor of the noodles and soup. 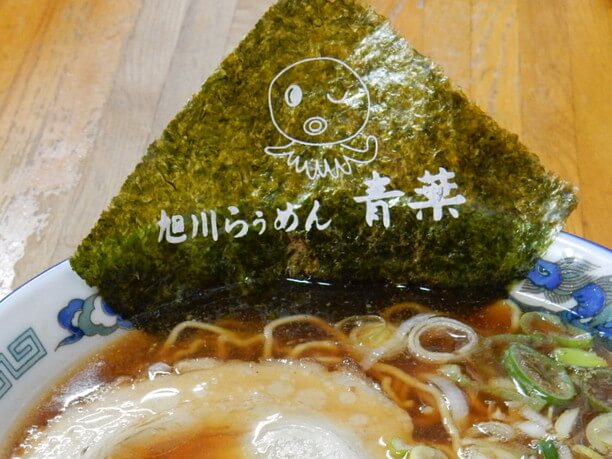 There is a playfulness reflected on the seaweed with its special design. Characters like an octopus are drawn in white along with the store name.

Keeping warm until the end!

Characteristic of soup is not just the clean flavor, it is also the steamy warmth of the noodles that make this ramen famous. 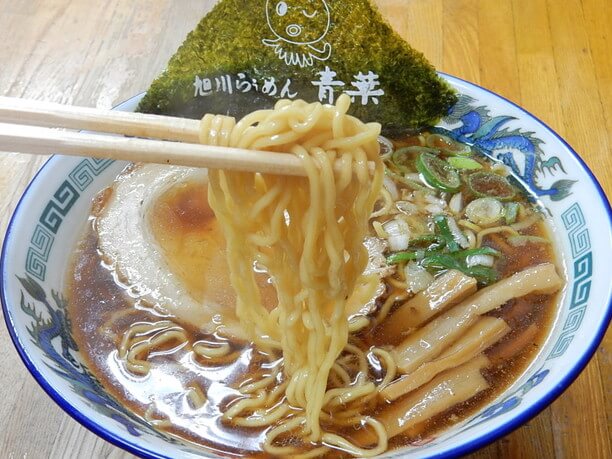 Their soup was made in a way that took into consideration the climate of Asahikawa. Because it is a basin, it is subject to severe cold attacks in the winter. In the past, they have recorded -20 and even 30-degree temperatures. Even on such an extremely cold day, the first generation soup was difficult to cool down, providing delicious taste until the end. Customers have come to expect and enjoy this soup that keeps warm to the end.

Enjoy this delicious taste you want to eat again and again!

The Aoba has visitors that come from across the country and even overseas. Celebrities often come in to enjoy the noodles as well. 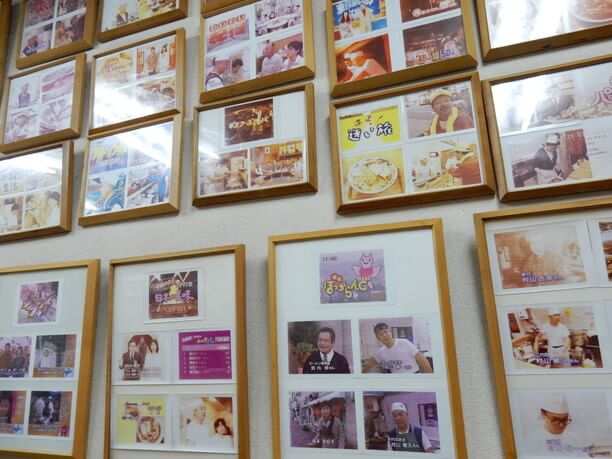 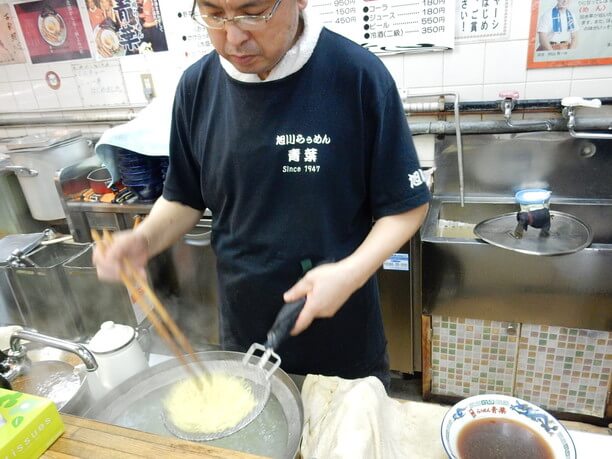 To take over the creation and taste of this historic shop’s ramen is a heavy burden and a heavy responsibility. However, Murayama handles that pressure well as he comes to work every day. And his serious attitude is reflected in the taste. 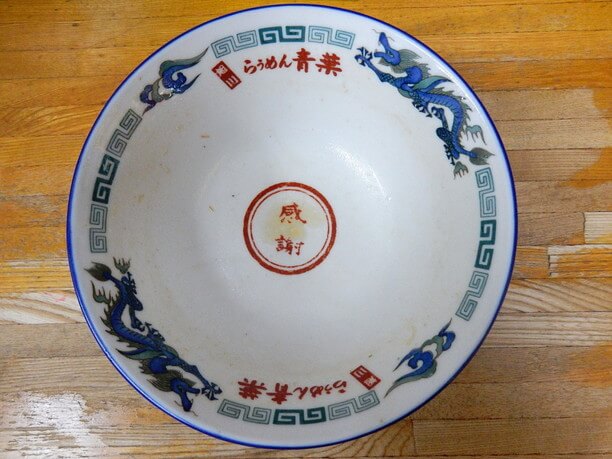 Mr. Murayama’s wishes for customers are shown in the two letters “thanks” drawn on the bottom of the bowl. The shop is full of history and delicious ramen with a mellow taste that customers do not get tired of.

Although there are images of stubborn, grumpy shopkeepers when people talk about old shops and original shops, all the clerks are friendly and attentive is here. Customers return often not just for the good taste but for the at home atmosphere.

Close
Wednesday (in the case of a holiday, next day)