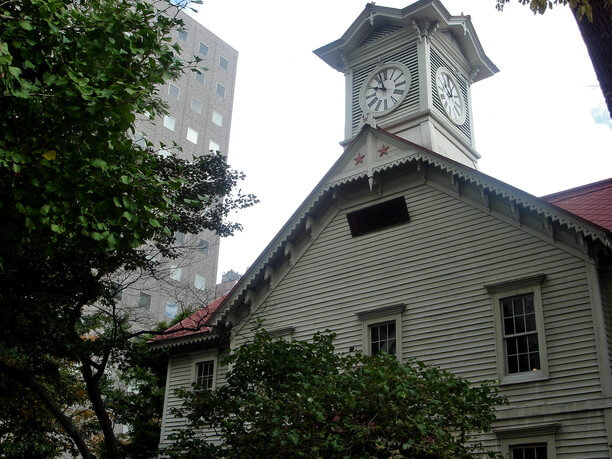 The Sapporo Clock Tower is a wooden structure built during the Meiji era (1868 ~ 1912). The tower might be frail-looking now because it is surrounded by tall office buildings. However, when you step in the building and learn about its history and the mechanical structure of the clock, you will soon realize the tower was walking through the pioneering history of Sapporo and Hokkaido with the people of Hokkaido.
You would never say the Clock Tower is one of “the three major disappointing destinations in Japan” once you learn the true aspect of it.
The Sapporo Clock Tower that has been quietly but strongly marking the passage of time for over 130 years. 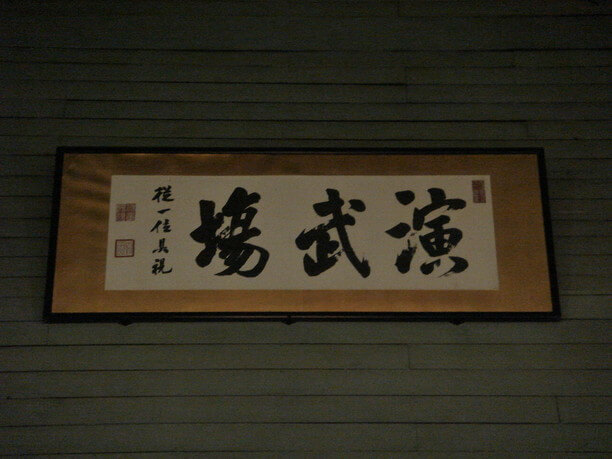 Originally The Sapporo Clock Tower was located a little to the north but in 1878 it was moved to the present location as a facility of the Sapporo Agricultural College (now Hokkaido University).
Dr. Clark, the 1st vice-principal proposed the construction and Mr. Wheeler, the 2nd vice-principal completed the building. At first it was used for physical education classes or commencement & enrollment ceremonies. The Sapporo Agricultural College taught students new technology and philosophy and produced a lot of elites who became history makers such as Mr. Inazo Nitobe.
Even now, the Clock Tower rings a bell every hour and that clear and the same gentle sounds were the sounds to tell the beginning of the modernization of Hokkaido and Japan. 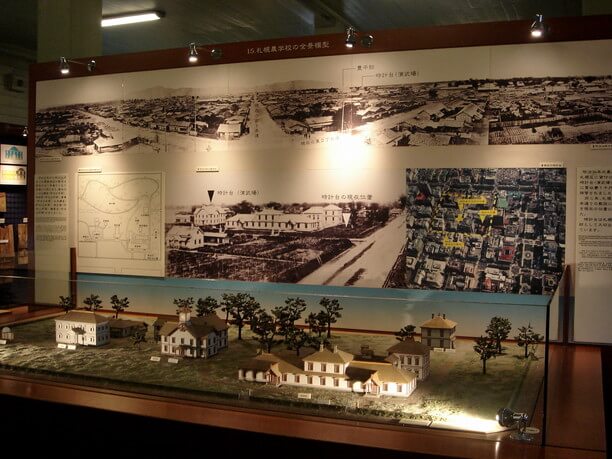 The diorama of Sapporo at that time during the construction. There were not so many buildings around and the record says that the bell to tell time was heard as far as 2.5 miles away.

The secret story behind the “Popped-out” Clock Tower

When the building was first built, it didn’t have this symbolic Clock Tower. The installment of a large clock was an idea of the director general of the Hokkaido Development Agency, Mr. Kiyotaka Kuroda. The vice-principal, Mr. Wheeler ordered the clock to E. Howard Watch Company in America, however the clock that was delivered turned out to be much bigger than they expected. They had a hard time re-constructing the clock tower and finally that large clock tower started to strike the exact hour to the people of Sapporo. 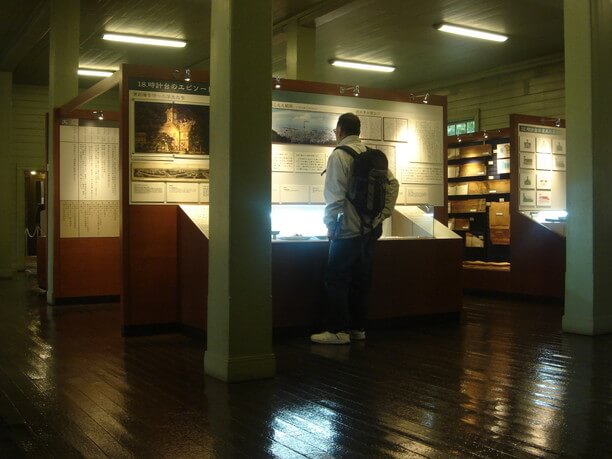 The tourist destination that everyone knows has many trivia questions!
Please find “Really?!” questions as you browse.

The Clock Keeper – the job to pass down to present

The Sapporo Clock Tower has been striking the precise hour for over 130 years since the beginning. The E. Howard Watch Company’s watch is maintaining the original condition and still working. This is a very rare example in the world.
This is because of the clock tower structure free from distortion created by the sophisticated techniques and the thorough and careful maintenance done by the clock keepers.
On the 2nd floor hall, you can take a close look at the same “brother” clock as the one in the clock tower.
Every morning at 9:15 am, the staff shows you how the clock works by using that brother clock and demonstrates the weight winding-up that is used as a power source. 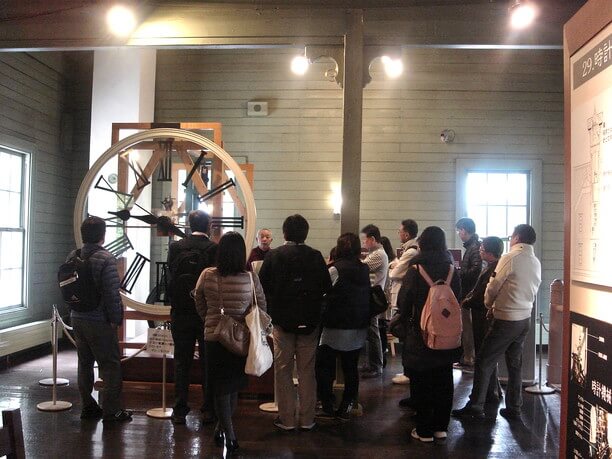 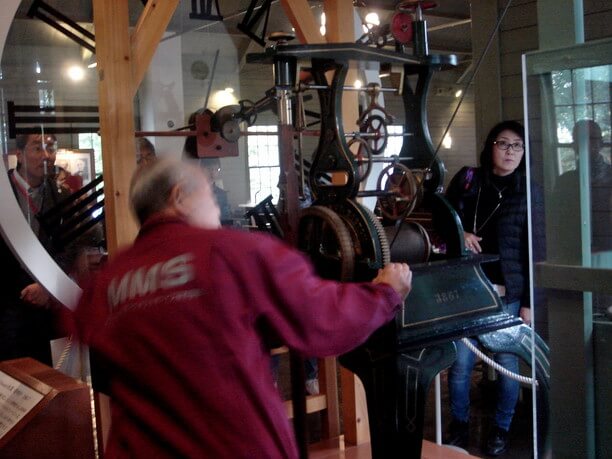 The staff powerfully winds up the weight as much as it needs for one day. As he winds it up, the weight gradually goes up. The audience would ohh and ahh over the sight.

Commemorative photo from the best angle

After you spend enough time inside of the Clock Tower and learn a lot about it, please take the best angle shots to commemorate your visit. 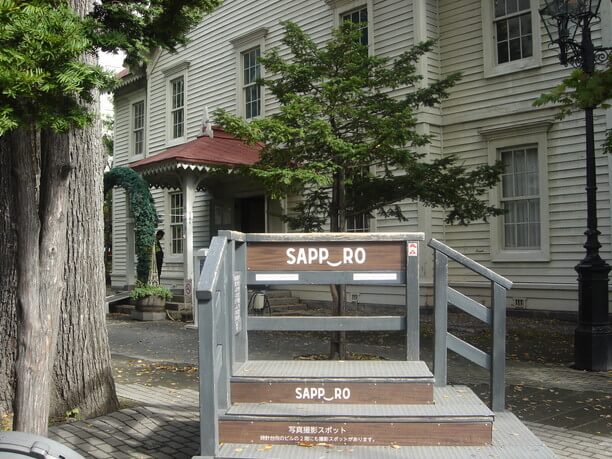 If you want to include some other people in your photos, use this small platform for photo shooting. There are always a lot of visitors around the Clock Tower.
If you want to take the entire view, go to the building across the street. There is a terrace on the 2nd floor and the terrace is great for the
photo-shooting. 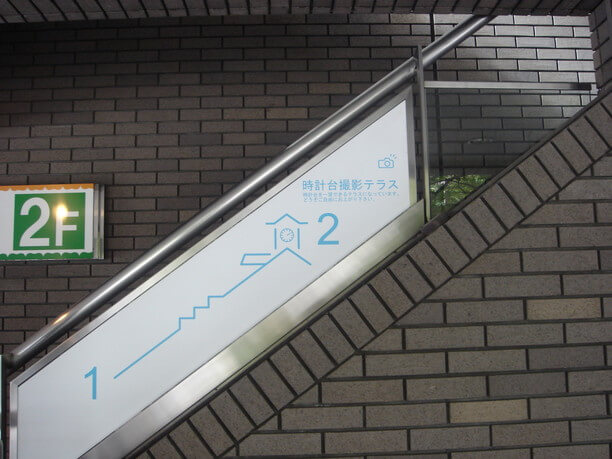 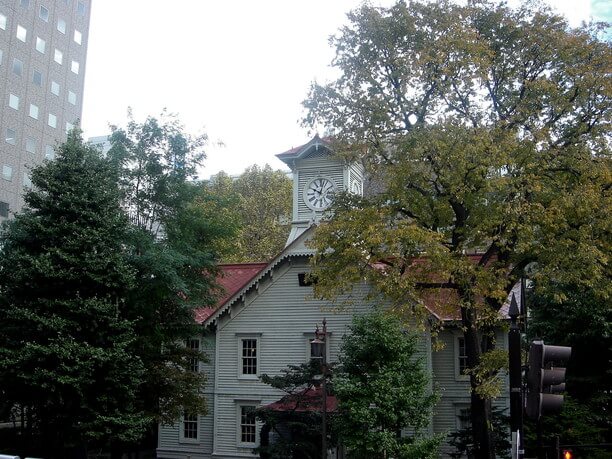 a photo from the terrace

Take a piece of memory with you –“Yuru-Kyara” (note: mascot characters created by local governments to promote tourism)

You should stop by the gift shop on the 1st floor inside the building if you want to take the Clock Tower memory home.
This small gift shop surprisingly has a great gift selection from small items such as key chains and handkerchiefs, to miniature kits and books. 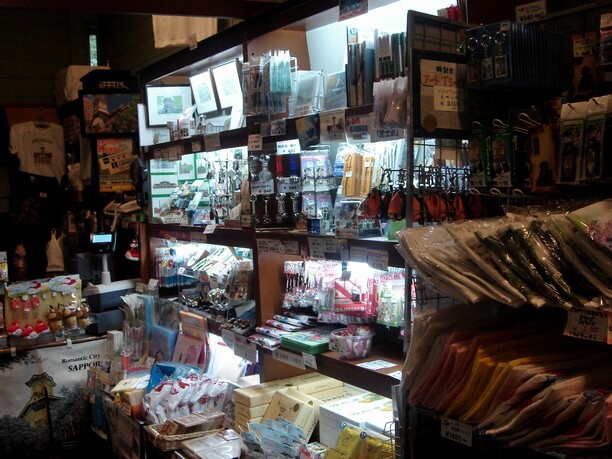 The Clock Tower has its mascot characters called “Tokke” (note: This word is made from “Tokei” -a Japanese word for a clock.) and “Tokei Daijin” (note: This is a coined word from “Tokei-dai (clock tower)” and “daijin” (government minister). These two characters are very cute and popular. You should check out this gift shop if you want something unique because they have some rare items. 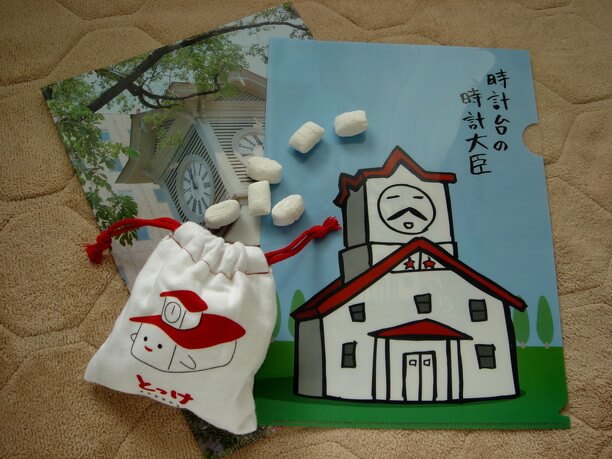 Concerts are often held in the hall on the 2nd floor. The sounds of musical instruments and the voices of singers echo very warmly throughout the hall and they make you very calm and tranquil.

At every hour, the clock strikes the bell according to the time (5 times at 5 o’clock). The sound is nostalgic. The clear and gentle sounds reflect the history of the Clock Tower.