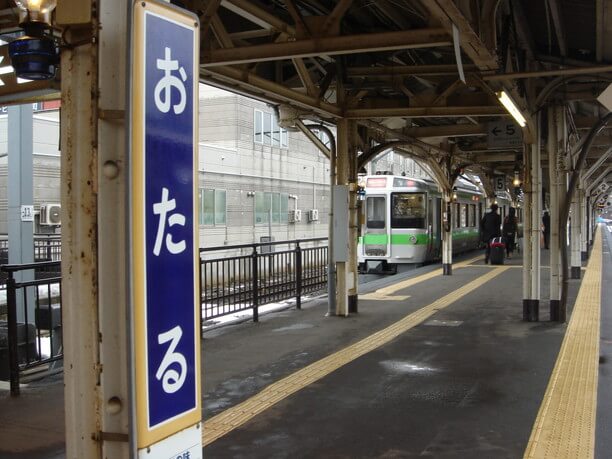 Otaru City is known as a tourist city and Otaru station is the gateway to it.
There is a famous canal that is a tourist attraction within walking distance from the station. It is also a starting point for many roads which many tourists use to get to neighboring sightseeing spots. Of course, the station is a convenient point of transportation, but there are lots of places to enjoy in the train station itself.

The Otaru station was built in 1903. It was originally a key part of transport connecting Sapporo and Hakodate. It played a big role in the movement of people and goods!
Currently, the importance of the route on the mountainside leading to Hakodate has lessened, but still many people use it to travel from Sapporo to Otaru. It is one of the top 10 most use lines in Hokkaido . 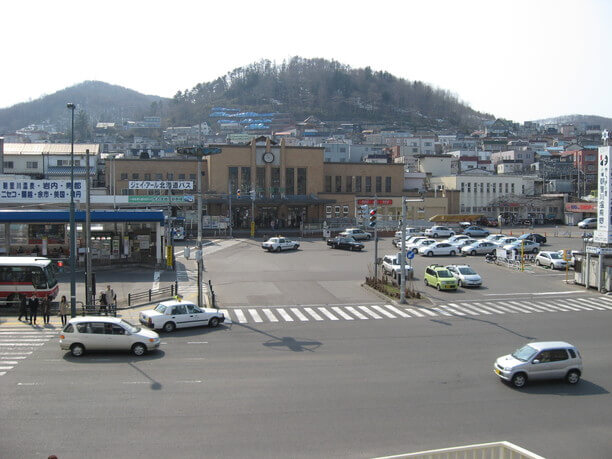 The symmetrical, station was designed using the Ueno station from the early Showa era as a model, It was registered as a tangible cultural property of the country in 2006. In 1989, they created an alliance with Ueno station as a sister station. Renovation work was completed in 2012, restoring the station close to its original appearance. 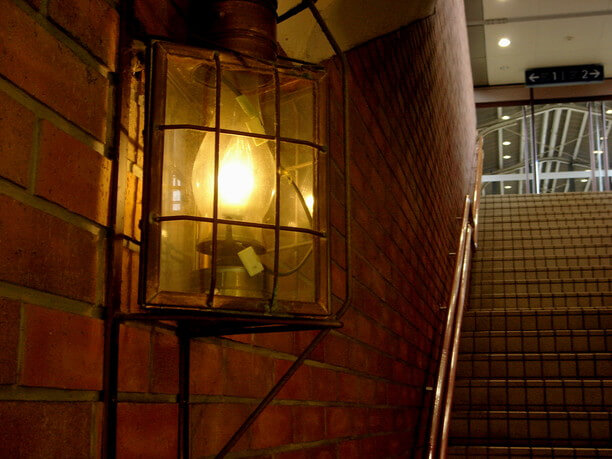 The station uses brick walls to create a warm atmosphere!

The platform at the Otaru station lets you feel the history of the city at the beginning of your trip.

This retro-style station is a place for sightseeing beginning with their downstairs platforms. First of all, the lighting is a series of lamps installed on pillars. It is symbolic of this city known for its glass craft. The light of 333 lamps in the station welcomes those who get off the train. 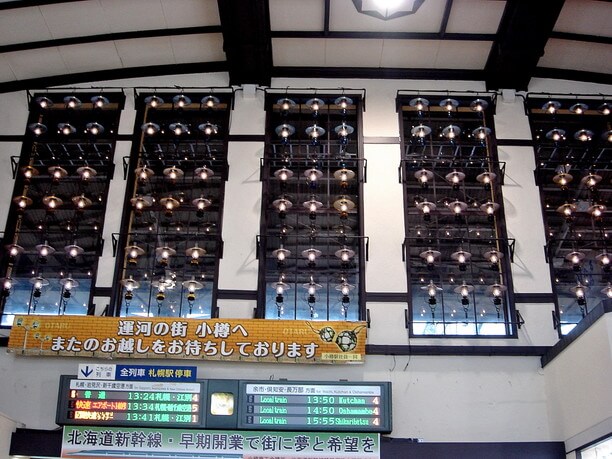 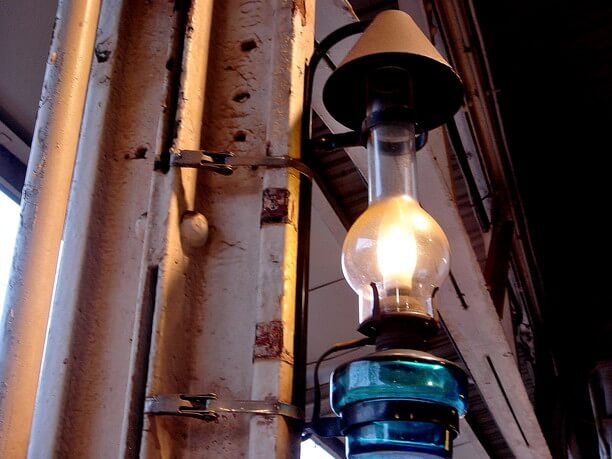 It is especially nice at night! The slightly shaking lights bring forth a romantic atmosphere. 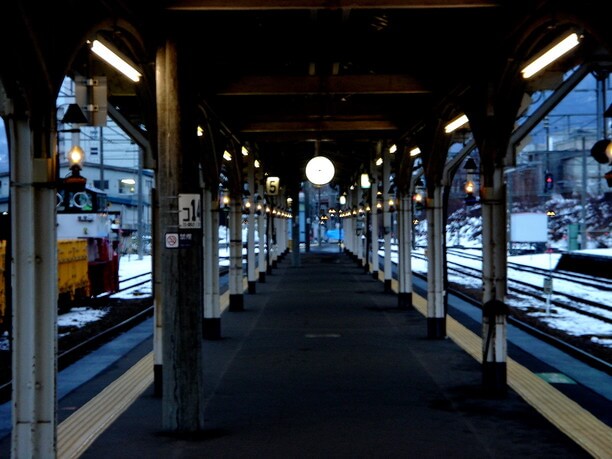 On the 1st and 2nd platform there is a miniature of the”Mukai Bell” displayed. This is the bell that was used until about 1965. The sound of that bell told the people of the arrival of the train. It rang twice in the case of the inward bound train and three times in the case of an outward bound one. When the sound of the bell was heard, people who were waiting for the train hurried to the platform to board. 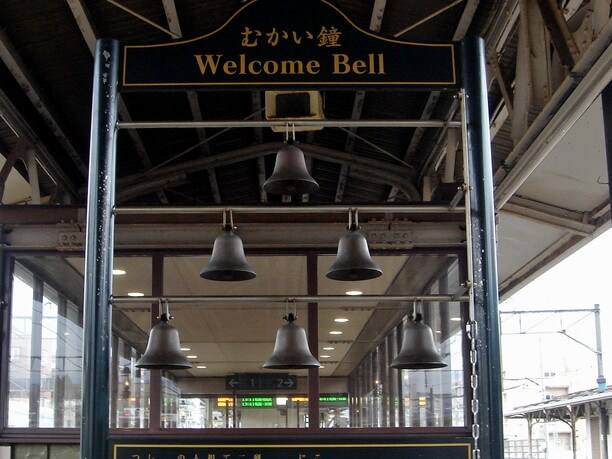 Although it is only a replica of the original bell, it does actually ring. The clear warm tones that resonate on the platform create a nostalgic feeling, reminding people of the hustle and bustle of the former station.

The platform is a great place for a commemorative photo! 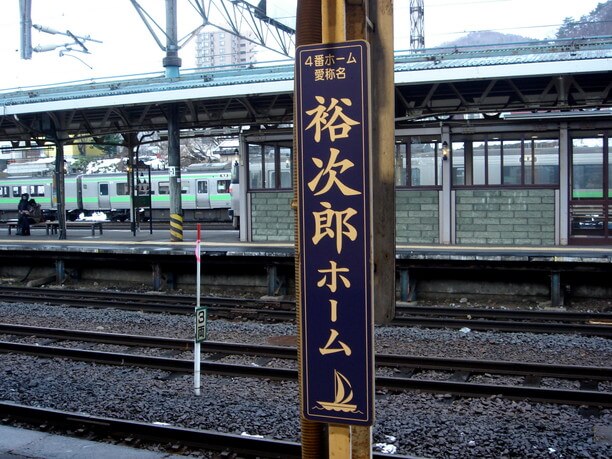 The 4th platform is known as “Yujiro’s platform.” It is named after Yujiro Ishihara(石原裕次郎さん), a big star deeply connected to Otaru. 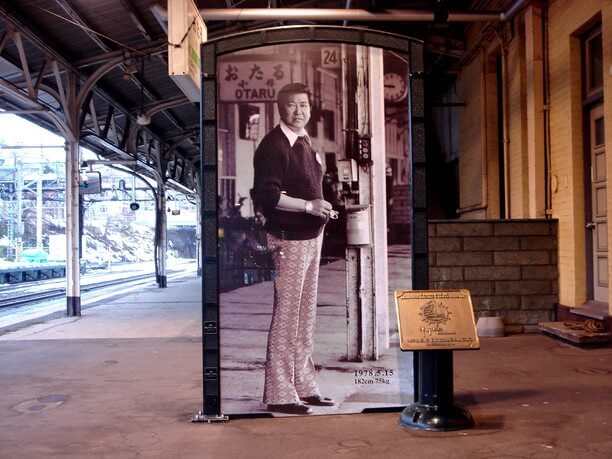 The biggest attraction is a life-sized photo of Yujiro! The picture was taken in 1978 while filming on location for a television program. The picture of Yujiro’s arrival at platform #4 is now permanently displayed. It is also one of the better commemoration photo shooting spots at the station. 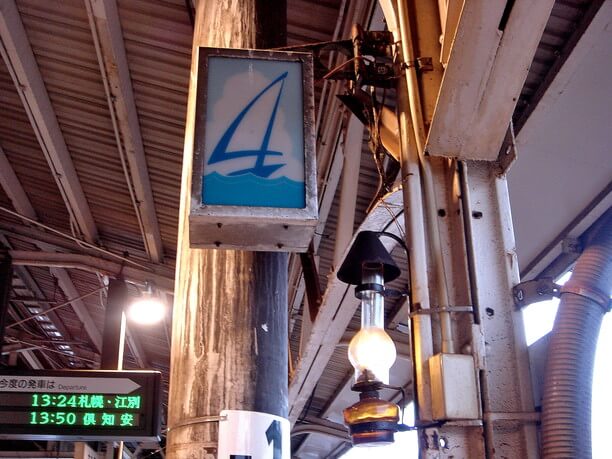 The sign identifying platform #4 is designed as a yacht.

The station is also home to tasty local delicacies!

Even after you exit the ticket gate, the attractions of the station continue.
In one corner there is the “Otaru Station Market.” It is a collection of five stores such as bakeries and cafes, including kiosks full of stationary and souvenirs. 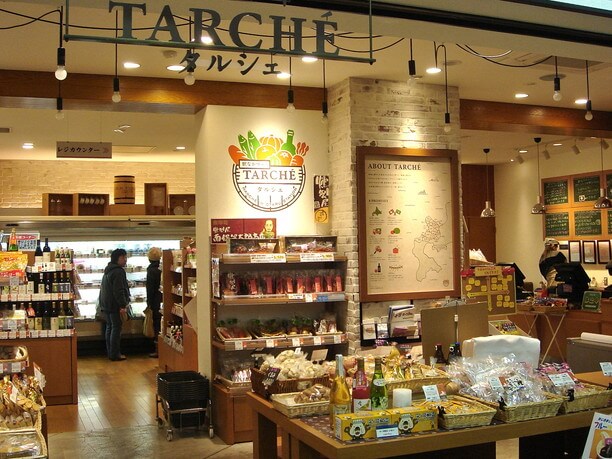 One of the most popular shops is the “Mart Tarche.” Inside the store there is a collection of delicious local items and souvenirs. They carry over 1,000 items. Eighty percent of which were made in the Shimane area of Otaru. 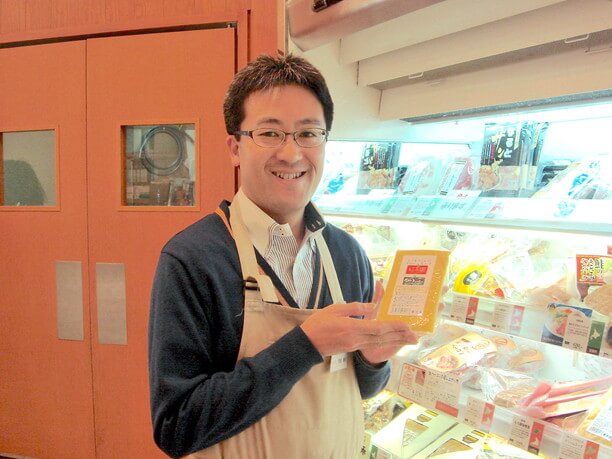 Yasuo Tsuruga (the manager) (敦賀康夫店長) talks with the locals, tourists and neighboring producers to get a good understanding of the supply and demand of available products. He says, “Even if it is a product of a small individual shop, if the quality is good and the heart of the person who made it is felt, we will carry it.” As a result there are lots of stunning things filling the shelves.

There are many delicious items the shop manager recommends confidently! 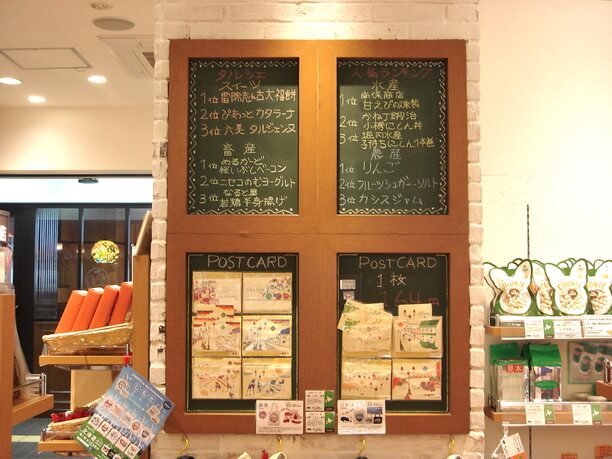 Mart Tarche, has a rich variety of items ranging from fresh foods such as vegetables and eggs to sweets and postcards. If you have difficulty choosing, what to purchase please refer to the popularity ranking or speak to a member of the staff.
Below are 3 items the manager particularly recommends 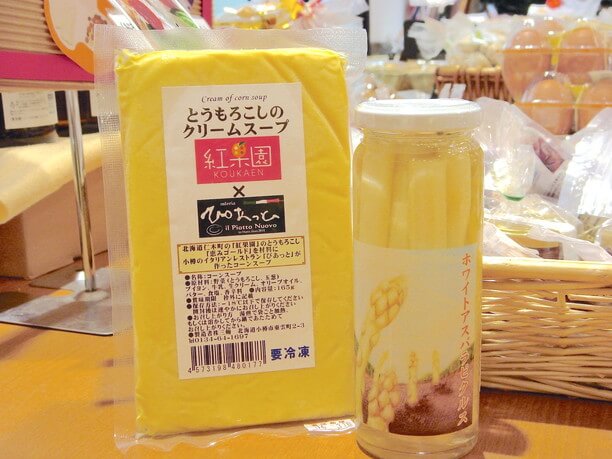 “Sweet Corn cream soup” for 540 yen (left). “White asparagus pickles” for 1080 yen (right). The soup was produced in cooperation with farmers at the red fruit garden of Niki town and the local Western restaurant “Piat.” Pickles are made at the Akaigawa Koropokkura Village. It is a product made by a farmer who is said to be an Asparagus master. They have a delicious crunchy taste! 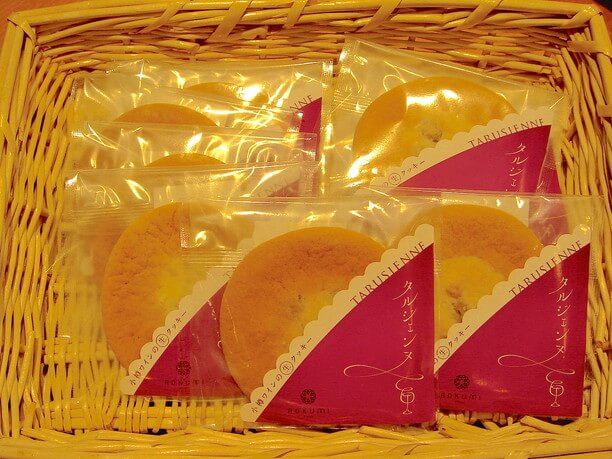 The third item is the Tarusienne original sweet for 132 yen. It is a raw cookie produced with the cooperation of the local confectionery store that is made with Otaru wine. It is a delicious adult treat! Mr.Tsuruga introduces these products with the words. “We think that we are entrusted with goods from producers, and we want to show you how good they are!”

This local gourmet can be enjoyed on the spot or as a takeaway for your hotel room as well as in the car while traveling!

In Mart Tarche, there are also items of local specialty shops. You can eat sushi that is produced by “Ise Sushi,” which continues to provide high quality, fresh and delicious sushi. 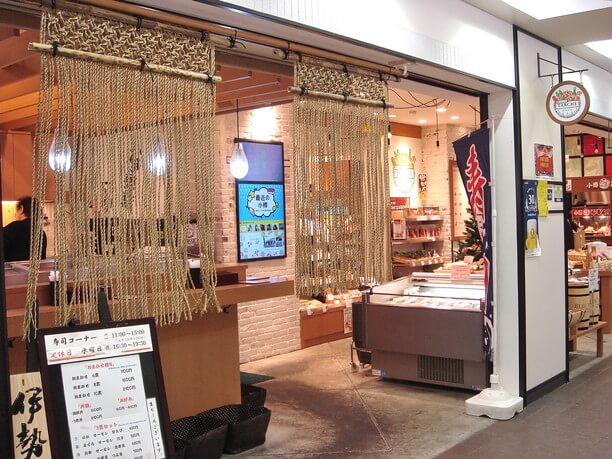 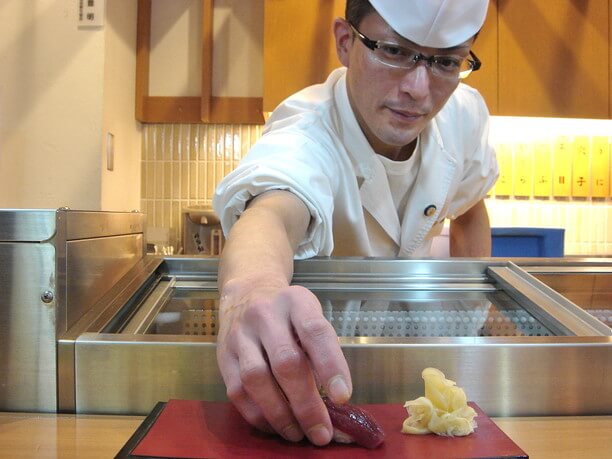 Many people use the time waiting for their train to fill their belly with a little taste of luxury. Because most of the food is available for takeaway, it is an ideal food to enjoy while traveling! 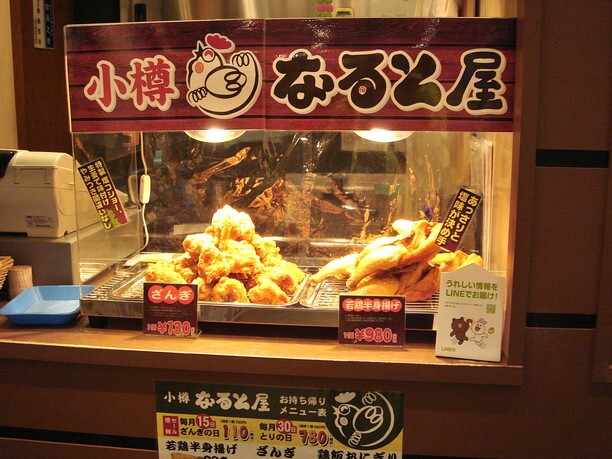 There is also “Otaru Naruto-ya,” a shop famous for its fried half-chicken.
This popular fried chicken is sold as 1 piece for 130 yen and “half-chicken” for 980 yen. This delicious chicken is actually freshly roasted with a soft and juicy texture!
Many customers buy this chicken because they can eat it inside the car, or they buy half-chicken for a souvenir!

Otaru station has plenty of sights and delicious gourmet food!

The station itself is pleasant, but from the subway car’s window between Sapporo and Otaru, you can see the sea, the mountain, and the peninsula. You will not be tired of seeing it many times. You can change the time you travel and enjoy the scenery at different times of the day!

In the station Mart Tarche