Japan’s unique “Wabi-Sabi” culture can best be experienced at the Ryoan-Temple. In 1994 it was registered as a UNESCO world cultural heritage site and, now attracts many tourists from both home and abroad.

Queen Elizabeth II of the United Kingdom particular praised what she called the “rock garden.” It is famous for 15 stones that are placed in an unusual zen pattern.

Visitors observe and study the stones, imagining what the meaning in them is.

While feeling the energy of the “Wabi-Sabi,” it is a good idea to refrain from looking and just relax once in a while. 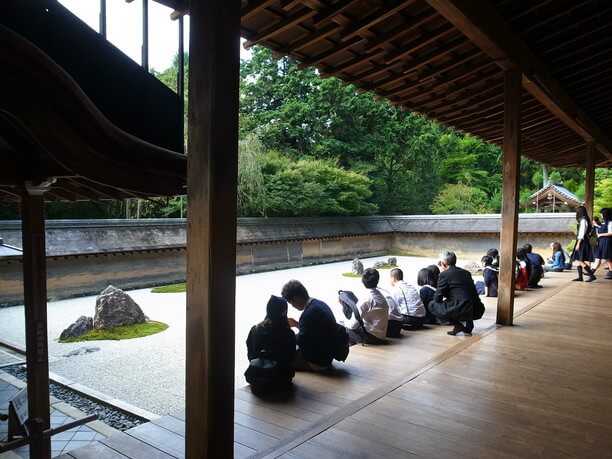 The original temple was established by Katsumoto Hosokawa.

Katsumoto Hosokawa (who was under Ashikaga Shogun) built the temple in 1450. It was destroyed in the Onin War, and rebuilt by Seimoto (a child of Katsumoto) in 1499 together with the people of “Hojo.” They made what is referred to as the “rock garden.” But in 1797 there was a fire that destroyed the temple once again. As a result of the loss of all documentation, the “rock garden” has been shrouded in mystery. That’s why many consider it an interesting guessing game to figure out exactly what it is they are looking at in the rock garden. 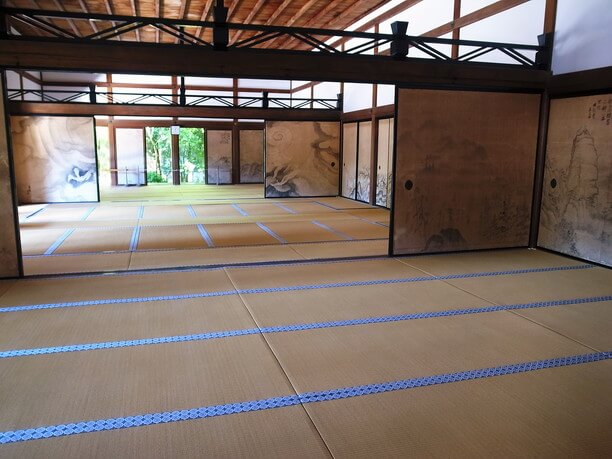 Hidden in the Ryoan Temple is the world famous “Stone Garden.”

What is officially called the “Hojo Garden,” has been designated a national historical landmark and is considered a symbol of the finest landscape gardens.

The rock garden has a width of 82 feet, and depth of 32 feet and is composed of
15 stones placed on white sand, creating the ultimate Zen garden. 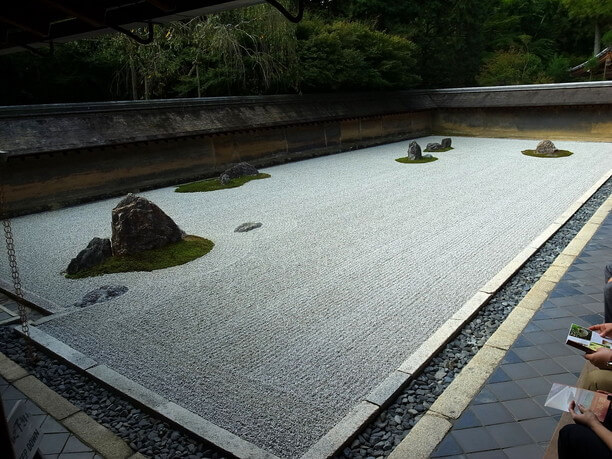 The Rock garden called the Zen Garden mostly due to the fact that the information of why it was created was lost in the fires.

An interesting feature of the garden is the use of a special building technique where the height of the wall surrounding the garden gets lower as you go towards the back where it connects to the earth. This technique was used to prevent decay of the “clay walls” that were made from a mixture of red clay and grapeseed oil.

Because of the design, you will definitely notice the wall is slanting down towards the earth and makes you wonder even more who designed this garden! 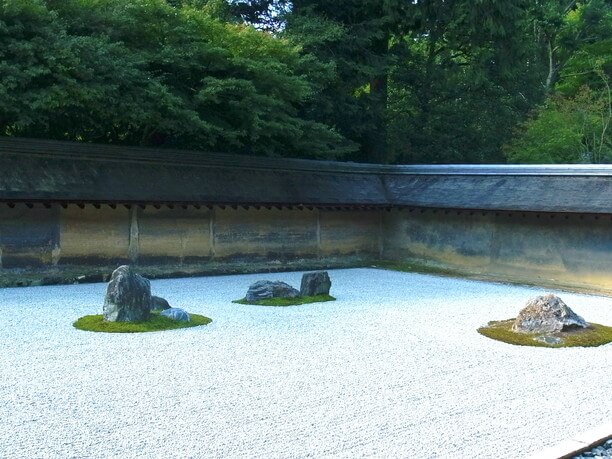 Think about the mystery of the number 15 at the stone garden!

In Japanese culture, the 15th night is called the “night with a full moon” and represents a “completion” in the East. It represents the idea of almost perfect (one step away). The beauty of Zen, Wabi-Sabi culture is that the beauty is in being almost perfect because if you would reach perfection (enlightenment) you would disappear (cease to exist in this physical world).

Perhaps this is why so many people are attracted to this garden, a chance to contemplate beauty and perfection and meaning of their life.

So as you open yourself up more towards perfection you may be able to see all 15 stones. So when you visit it is important to see how many stones you can see. 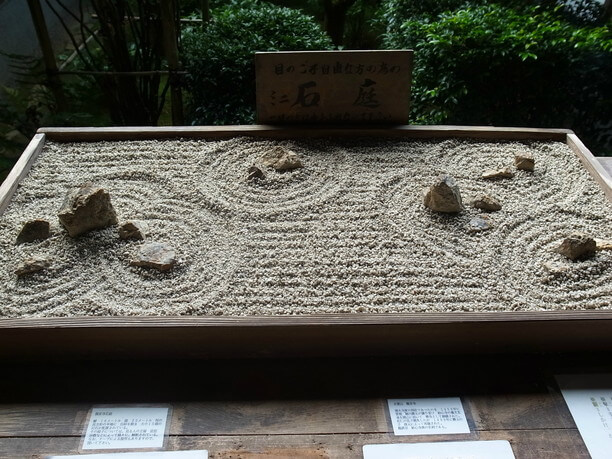 The rock garden is also known as the “Tiger Cub Passing” and “The Garden of the 753.”

When three Tigers cubs are born together one of them always grows the most fierce and eats the other two. So to keep them all safe the mother tiger carries the fierce one across the river first.

This scene is depicted in the Chinese book “Mizunotokarashi ” (knowledge of the four tiger tales) and some believe it is represented by the placement of the stones. 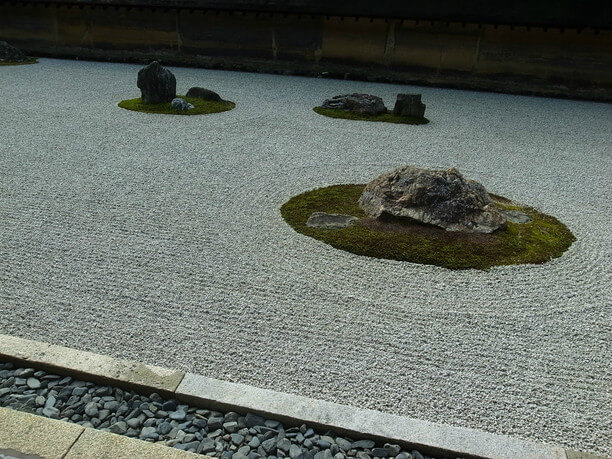 If you proceed down the corridor you will see a dipper next to what looks like a form of money.

This is called a “Tsukubai” It is for rinsing your hands and mouth before entering the tea room. It has been said to have been donated from Mitsukuni Tokugawa. The center of the water hole was designed to resemble the Chinese character of mouth. On it is the word “Waretadaashichi” that represents the “heart of knowledge” of the Buddha. Simply put, if the heart is rich a person always seems to have enough no matter how poor, and people who are greedy never have enough and always complain 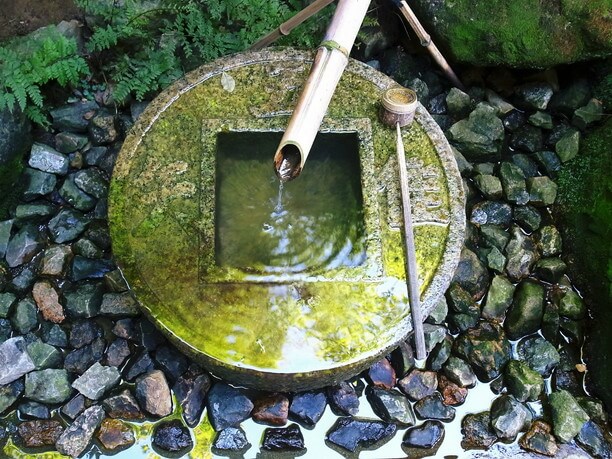 It is Japan’s oldest Tsubaki. It was brought back from Korea during the Momoyama period. Shogun Hideyoshi, really loved this Tsubaki. 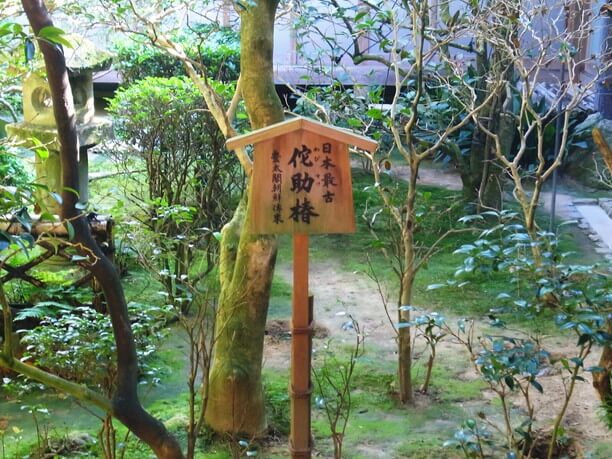 The “mirror pond” takes up half the space of the temple grounds!

Around what was the Tokudaiji family villa was a large pond (named Kyoyo). It was said they would put a boat in this pond and while floating sing wonderful songs. In the Edo era, mandarin ducks would also swim in this pond and it became known as the “mandarin duck pond.”

Around the pond, there is a lot of flowers each season to delight in, such as the plum and cherry blossoms, rhododendrons, willow “, azalea, Fuji water lilies. The water lilies at the Lotus flower leafs are especially beautiful.

When you go to the middle of Benten Island enjoy the view from there, and of course don’t forget to say hi to Benten-Sama! 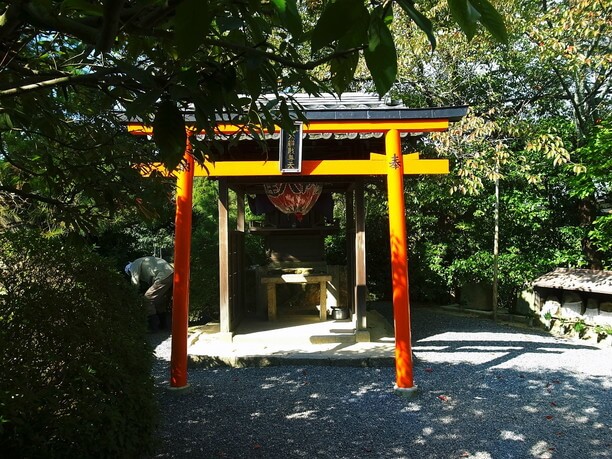 It feels like time stands still here at the Rock garden!
A long time ago the old mirror pond was more famous than the rock garden. They say when you viewed the pond it would make you feel bright and airy.
If you feel this way that meant you had a good experience of the Ryoan temple. Available are wonderful hand towel, handkerchiefs, and tapestries with illustrations of the rock garden!