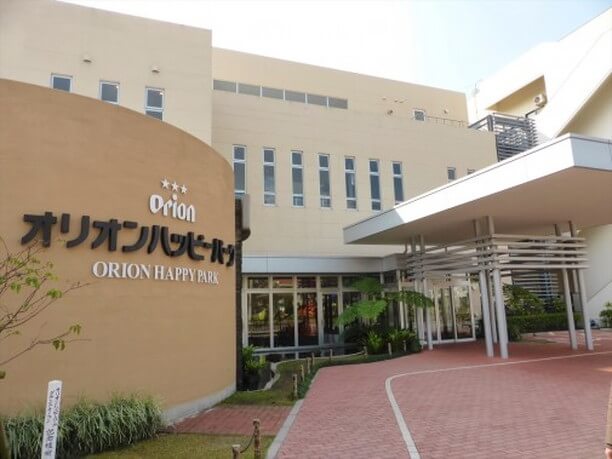 When you talk of great Okinawan beer, you are talking about Orion beer!
The people of Okinawa love Orion beer. They are very happy that Orion beer has a brewery in Nago City

The Nago City Brewery offers an excellent free tour. In 2014, it was rated #5 on TripAdvisor’s list of best brewery tours.

The beer factory tour brings out the hidden charm of this region of Okinawa.
You can make a reservation by phone for your place on this popular tour.
Orion Happy Park is where Orion beer is brewed. It is located on the edge of Nago City.With a phone reservation, you will be able to join the tour!

First, an introduction to the company.

The tour begins with an overview of the company. Okinawa Brewery Co., Ltd., (Orion Beer Co., Ltd. predecessor) was established in 1957. The company name was changed just after two years to what it is now. 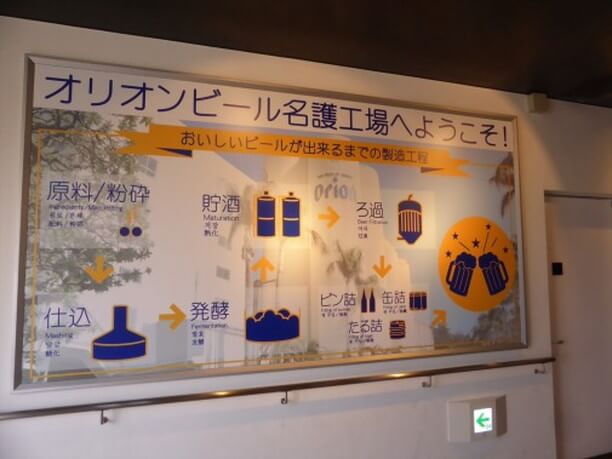 Next, the tour goes into what is involved in the manufacturing process.
Orion beer is not only shipped to Japan. This popular beer from Okinawa is shipped all over the world.
It has a huge production capacity of about 100 million bottles a year!
It is hard to imagine just how many that is. Roughly calculated, that would be about 100 bottles a year for every adult in Okinawa. Okinawans do love their Orion beer.

Next, we go to the site of the beer production! 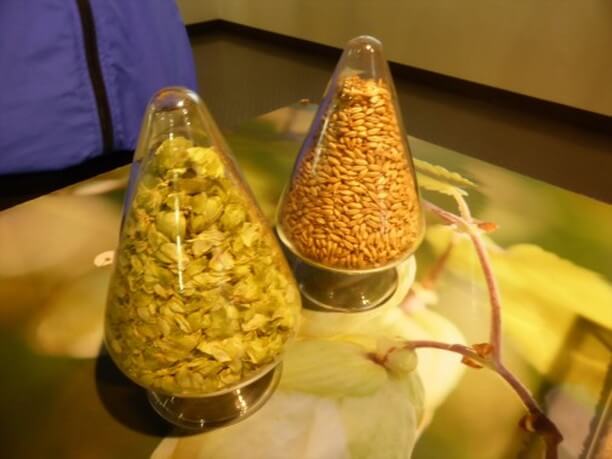 These are the main ingredients of beer: barley on the right and hops on the left. 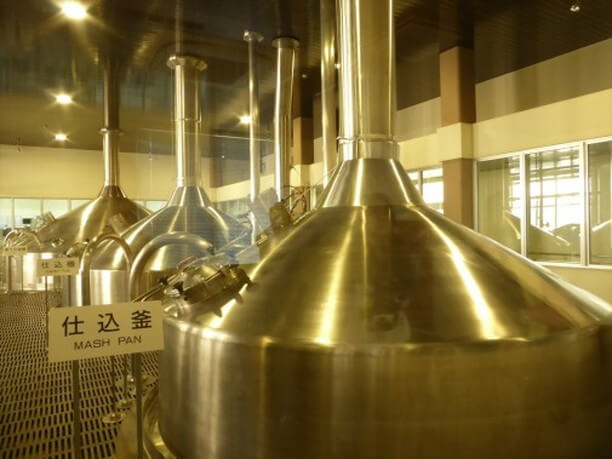 These are electric kilns, used in the first step of boiling the ingredients.
One pot load will brew around 70,000 bottles of beer. On a typical day, they will brew 8 times. The temperature of the kiln will rise to nearly 212 degrees Fahrenheit.
In the summer, the space around the kilns will get to over 120 degrees.
So the workers who make this delicious beer are really appreciated for the work that they must do in this rather harsh environment.

Let’s look where the beer is stored! 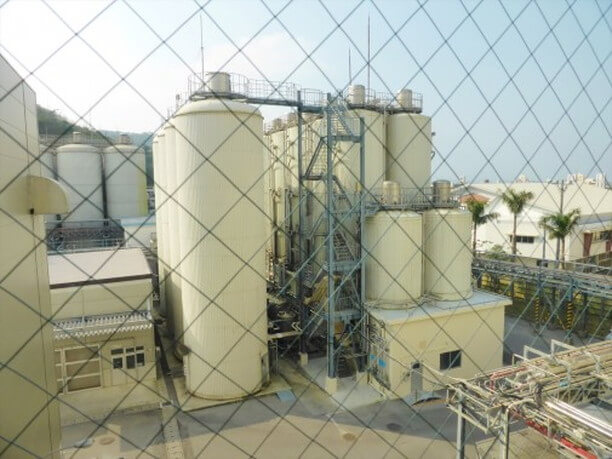 Storage tanks for the beer are visible to the outside.

If you drank one 350ml bottle of beer every day, you could drink for over 1,500 years and still not drink up all the beer stored in these tanks.
Another way to think about just how much beer is stored here. If you took a beer bath every day for 60 days that you came to visit Okinawa, you could do that for 27 years and still not use up all the beer.

The final Stages before Orion beer is shipped.

The stored beer is aged for one month before it is shipped. 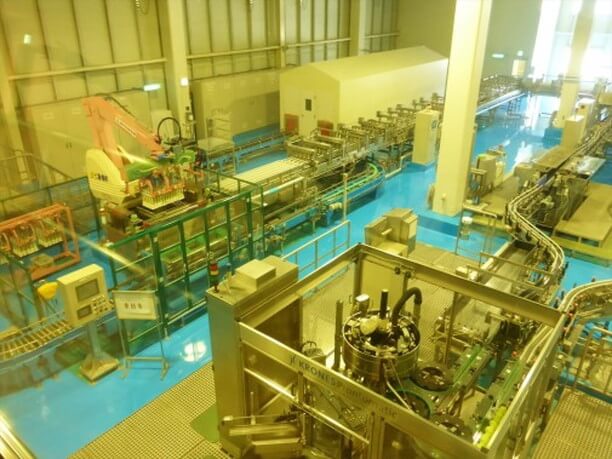 This is the canning assembly line. If you come on a weekday you can see a lot of beer cans flowing down the line.
The color scheme of the factory has a special meaning. It is intended to represent the sea of Okinawa! The floor color represents the color of the blue sea. The white walls represent the sandy beach. And the pink machines represent the coral. The thoughtfulness of the design has proved very entertaining for the visitors.

The Machine that pours beer in the cans and puts the lid on has an amazing processing capacity of 1,200 per minute. That is Just 0.05 seconds per can! It can package the beer in kegs , bottle, and cans. 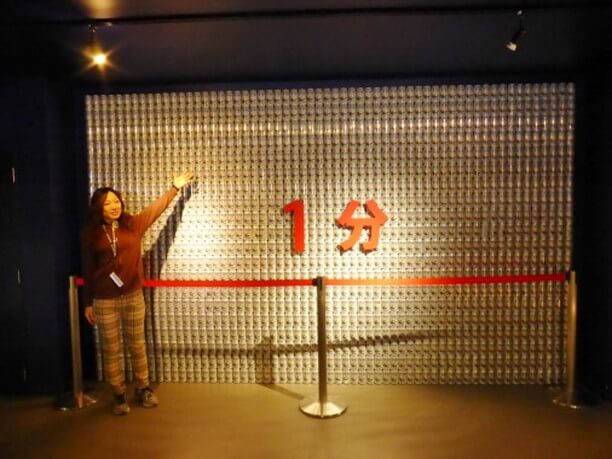 The beer is put on trucks for its journey in the prefecture and around the world.

Part of the attraction is after the tour!

After the factory tour of about 40 minutes, it is beer tasting time! One of the best parts of the factory visit is the beer tasting time. Not only do you get to taste the freshly brewed beer, you also are welcome to enjoy the free snacks provided. What beers are offered changes with the season, so it is worth coming at different times of the year. “Truly factory direct beer is the best !!” 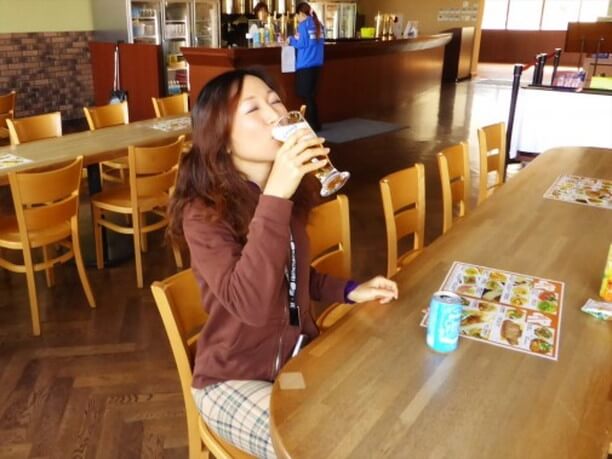 I was the driver for the day so I was just having a non-alcoholic beverage, but with each glass, I was enjoying the atmosphere as well.
My mother had previously taken the factory tour and said it was the best beer she ever had.

So if you are coming with someone in the car, by all means do your best to be victorious in rock-paper-scissors, so you can relish the taste of these delicious beers. 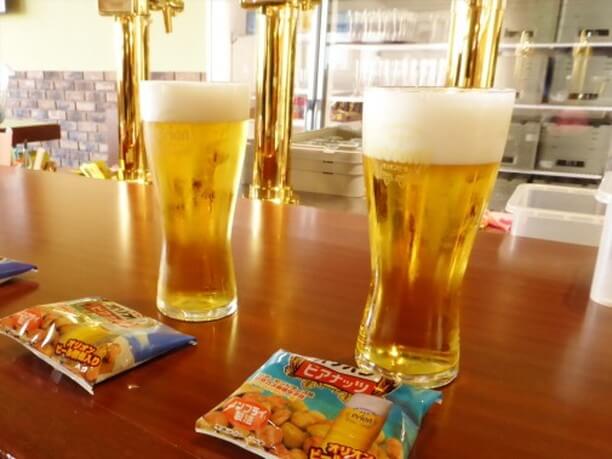 Orion beer is really light and refreshing, so it is a very good match for the
hot and humid Okinawa climate.
Once you Know the history and production methods of Orion beer that you learn through the factory tour, you might appreciate the beer even more during your stay.
So at night after returning from your day at the factory tour, share a drink of delicious Orion beer with friends and family. And by all means, enjoy the Okinawa night.