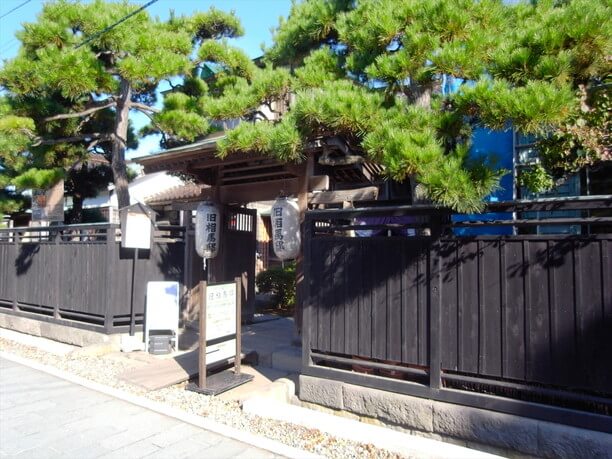 Surrounded by high fences and large pine trees, the former Soma House is one of the historical buildings that are particularly stately in the Motomachi area.

This is a private residence built in 1908 by Heppei Soma (相馬哲平). He was called the best merchant in Hokkaido. This wooden building combining Japanese and western design has something special in every corner of the building. 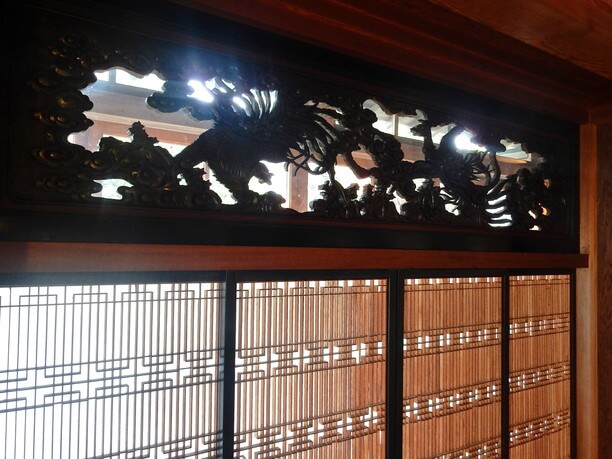 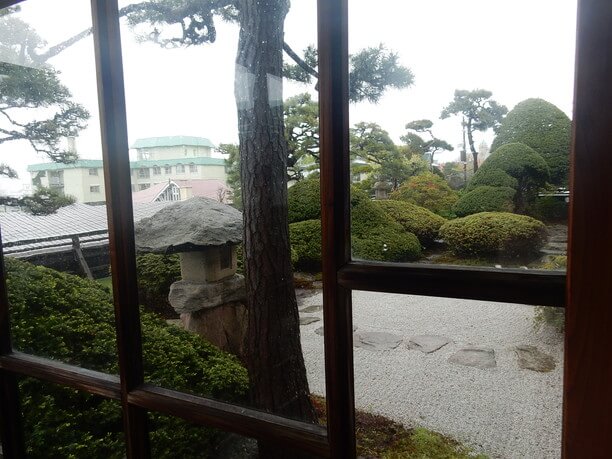 Not only the workmanship and structure but also the beautiful garden and the spectacular view from the windows are extraordinary. When you enter this magnificent mansion, you can feel the spirit of the former trading company.

Teppei Soma who built this luxurious mansion was a professional merchant!

Teppei Soma, from the first generation of Soma’s family, (bottom photo, right end) built the former Soma building. He came from the Niigata Prefecture to Hakodate in 1861, when it just opened as a port of trade. After three years of apprenticeship service, we started a rice shop in anticipation of changes at the end of Edo era. 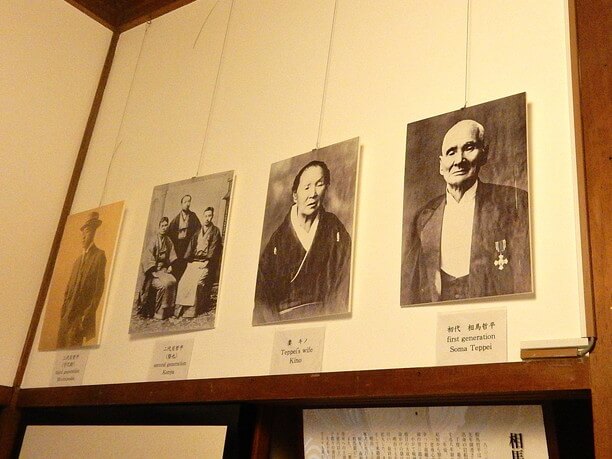 That business was a splendid big hit. He later became involved in the financial industry, and became a millionaire. He was known as the richest man in Hokkaido. 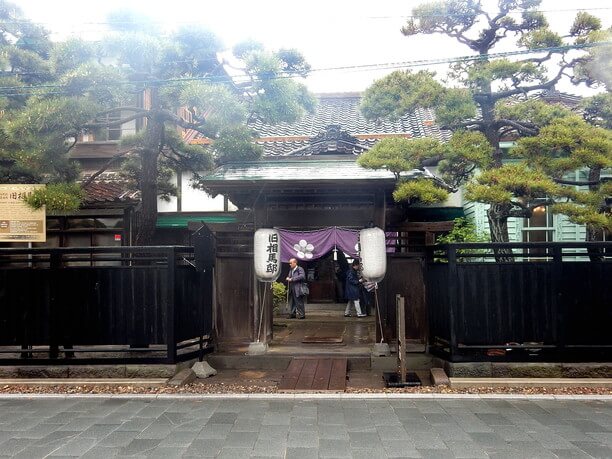 The former Soma building was built in the latter part of Teppei’s life. After the big fire late in the Meiji period, Teppei donated about 80% of the cost of the building to revive the former Hakodate Ward public hall which was destroyed by a large fire. The former Hakodate koi public hall, which is currently on the left, was also rebuilt. 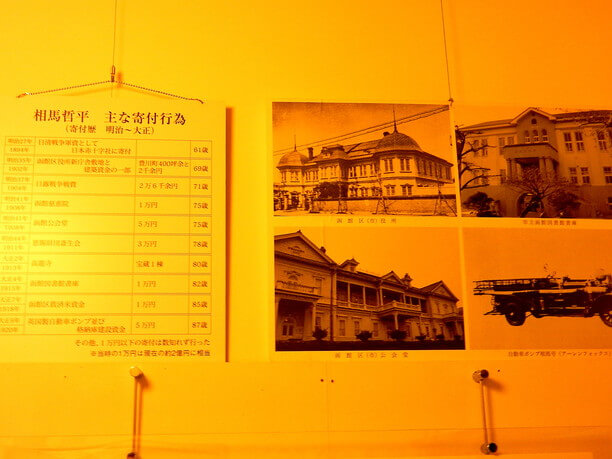 The accomplishments left by the Soma family including materials from the time, are displayed in the residence. There is also a “large fire data room” (bottom photo) in the attic where you can see the scars of the big fire from 1921. It is a place where you can learn about the history of Soma family and Hakodate. 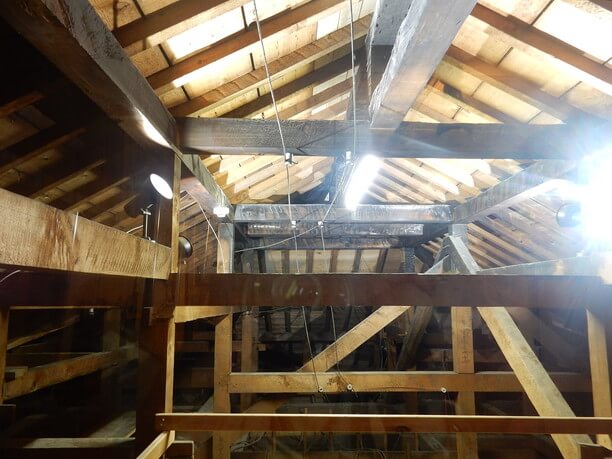 The dignified mansion built with Japanese and Western design is full of attractions!

The former Soma Mansion stands near the former British Consulate and Motomachi Park. It is a large mansion with a land area of approximately a half acre. 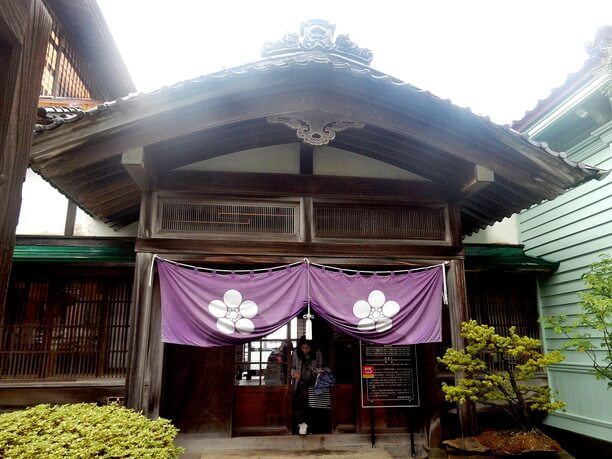 The front entrance has a strong presence, that combines rough characteristics with elegant curves. Below the columns there is a family crest that creates a feeling of elegance and delicacy in contrast to the powerful force that was the Soma family. 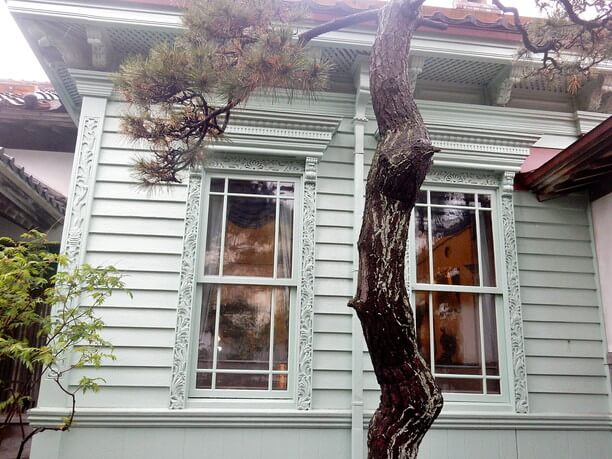 The most interesting place is the interior-style exterior is at the right side of the entrance where impressive, refreshing greens are located. There are also gorgeous sculptures near the window frames, pillars, and barbs of the roof. The power of the Soma family did not decline afterward and grew to become one of the nation’s longest-ranking rich families of the early Showa period. Teppei Soma, was active with other powerful men of the time like Konosuke Matsushita (松下幸之助)of Matsushita Electric (present · Panasonic) and Mikimoto’s founder · Yukichi Mikimoto (御木本幸吉).

You will appreciate the luxury of this gorgeous house!

The residences, rooms, corridors, and washroom are all luxuriously built and somewhat overwhelming. It is magnificent enough to catch your eye everywhere, including a beautiful garden with large stone lanterns and a view from the second floor. 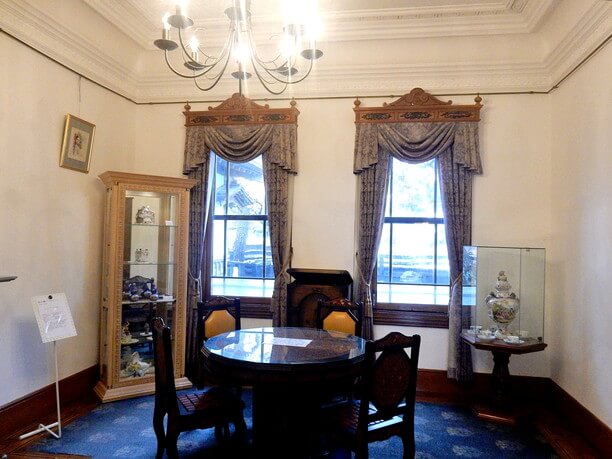 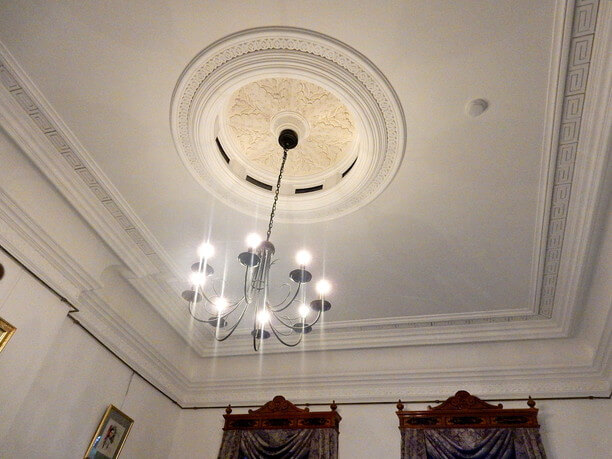 The Western-style room, which was used as a guest room, has plenty to see from the ceiling to the floor! A ceiling decoration carved with elegant patterns has a beauty that is reminiscent of the guest house. Everything is luxurious, including parquet floors made of mizunara trees and fireplaces decorated with mosaic tiles. You will feel like a nobleman just by being inside the room. 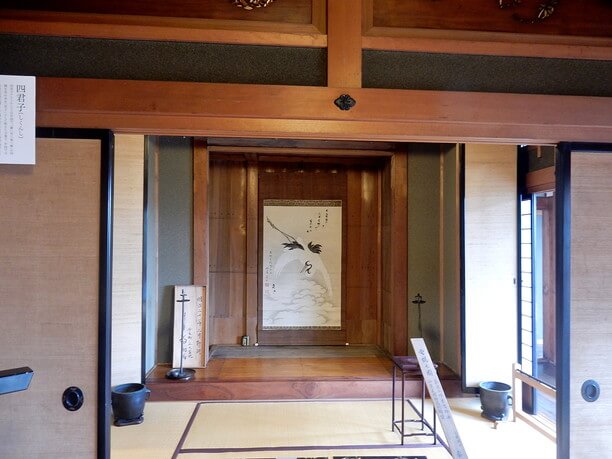 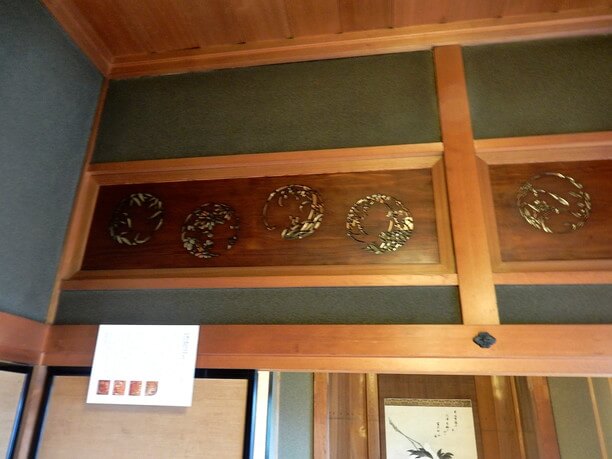 High-level construction techniques are transmitted everywhere throughout the building. The workmanship shown in the wide floor space and wooden pillars is outstanding! Inside the manor house, there is a Tsuchi Gallery, where the historical materials of Hokkaido are exhibited. There is also the Motohachi Cafe. In the cafe, you can enjoy freshly brewed coffee, fruit, and juice of Aronia. It is good to spend your tea time at this elegant mansion.

There are other historical buildings related to the Soma family.

Apart from the former Soma campus, there are other historical buildings deeply involved in the Soma family in Hakodate city. One of them is the Soma Company Building, which stands on the street of Tsushima Street at the foot of Motoizaka hill. 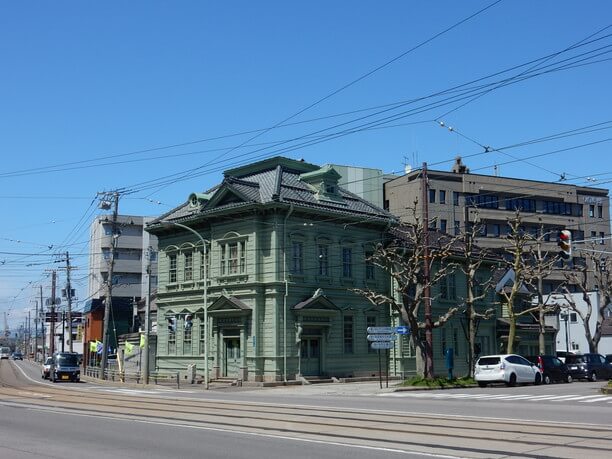 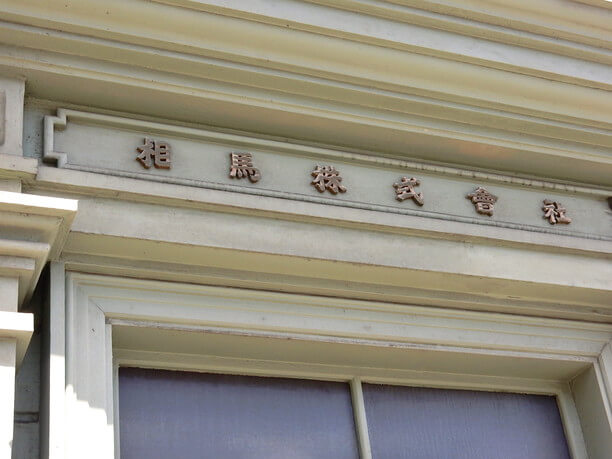 Built in 1914 (Taisho 3), the wooden two-story building is attractive with its outer wall of the green called Teppei’s lucky color. Built as a corporate house, it is not as luxurious as the mansion, but you can still feel the elegance in various places such as the round windows attached to the ceiling and decorative carvings under the eaves of the entrance. 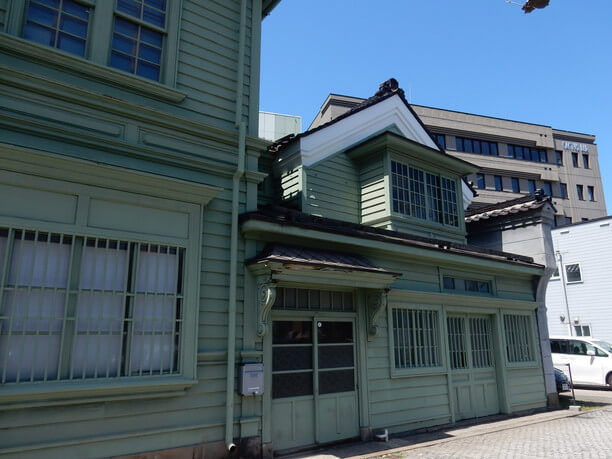 There is a firehouse standing at the side of the building. It was built to deal with the many fires that Hakodate had experienced. Actually, it is very lucky that the building miraculously escaped the major fire that occurred in the Motoizaka Hill area in the Taisho era. In addition the old Hakodate ward public hall and the former library of Hakodate City Library in Motomachi Park are historic buildings related to Soma family. 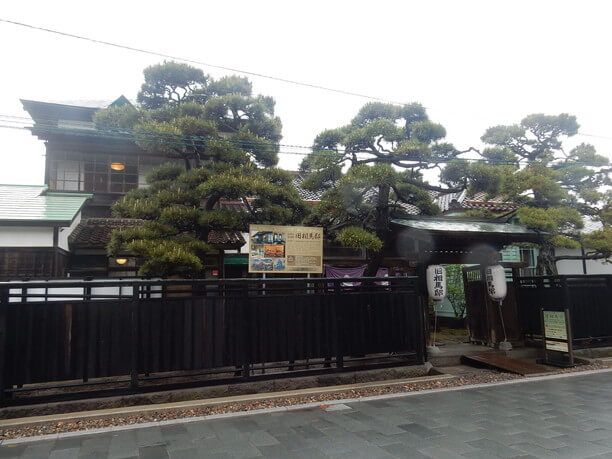 After feeling inspired by the luxurious construction at the former Soma house you get an idea of the scale of the wealth of this merchant. It is good to visit the building to get a deeper understanding of the Soma family.

The former Soma house, which can be seen from the garden of the former British consulate, is also a secret place to see. You can Appreciate the great deal of power of the Soma family who was allowed to build a mansion just above the consular office.