A huge Ferris wheel and an amusement park, so easy to spot even from a distance. Next to the amusement park, there is Otaru Aquarium.
The Otaru Aquarium is in the town of Shukuzu. And there are Nishin Goten (Herring Mansion) that has exhibits of household goods and photos of the people who used to live in a nishin-banya (workshop & house for herring fishermen), and Otaru Kihinkan (the Old Aoyama Villa) that is a magnificent mansion of arts in semi-Western and Japanese styles.
What is great about the Otaru Aquarium is the shows where you can see marine animals so close as you can almost touch them.
Walruses, seals, penguins, Steller’s sea lions, dolphins, South American sea lions, and more marine animals.
The Otaru Aquarium is the only place in Hokkaido where you can see so many different shows! 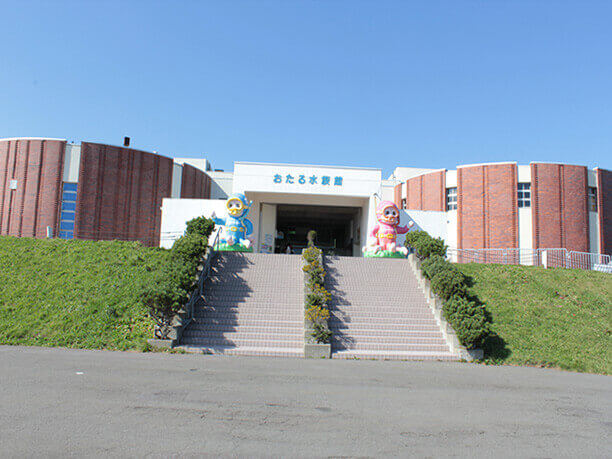 You can get to the Otaru Aquarium by car and by bus, too. The #3 bus from the Otaru station takes you there in 25 minutes.
You could take a sightseeing ship from Pier three and go to the Shukuzu port. 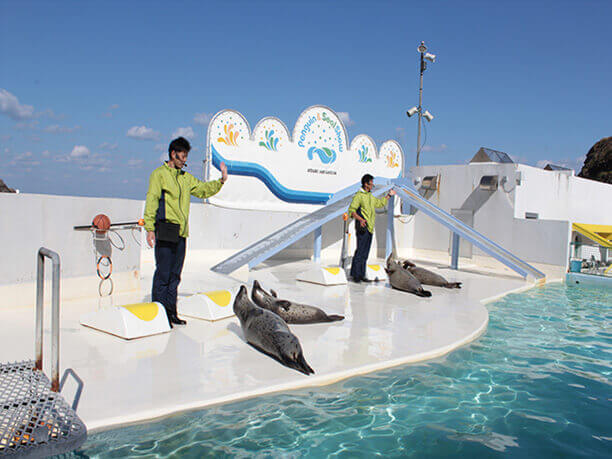 In the seal show, four seals compete with each other in a group of two.
One seal at a time in each team tries to see which one can jump higher, maneuver a ball more cleverly, and show better tricks.
At the end of the show, one person from the audience tries ringtoss with a seal. When the seal catches the ball adroitly, the audience gives a big cheer.
The program shows each seal’s different personality and you might pick your favorite seal by the time the show ends.

There’ll be a penguin show right after the seal show at the stage next to it.
Fickle penguins oftentimes do not listen to the trainer to perform their tricks.
And sometimes a crow snatches the fish that should be a penguin’s treat.
What is even worse is that the penguins that are supposed to be part of an act do not show up on the stage!
The penguins always get their way but the trainer keeps giving an upbeat talk and does an excellent job in creating a show out of all kinds of situations. You will be impressed by his tactful improvisation. 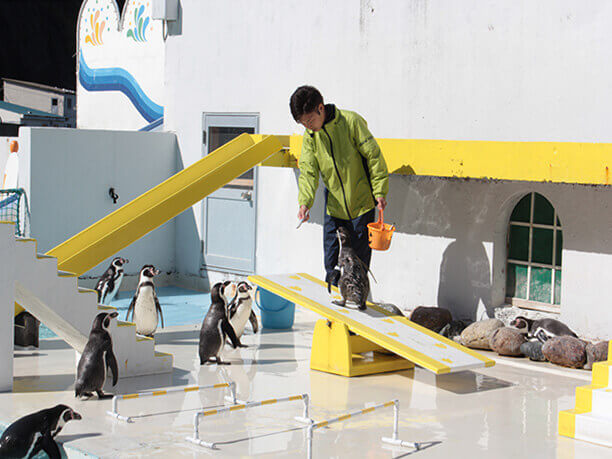 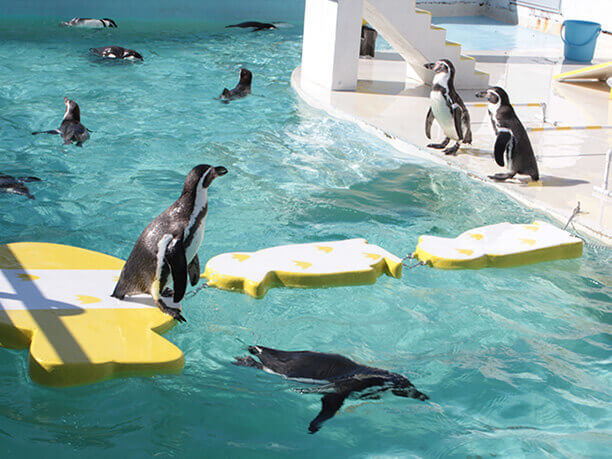 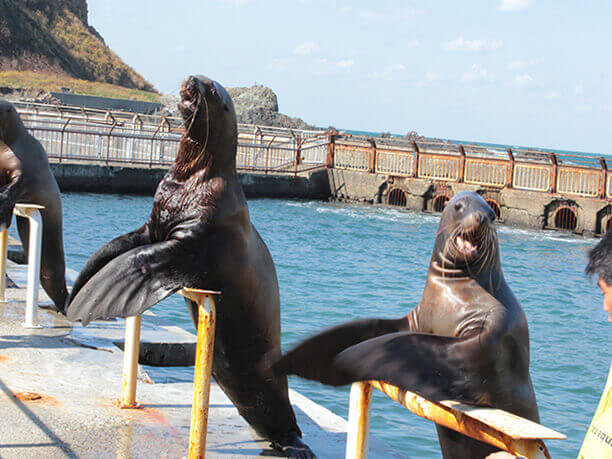 As the show starts, Steller’s sea lions come so close to your eyes. You won’t know how big a Steller’s sea lion is until you see it so close! It is overwhelming to see such a large animal that weights over 500kg (1100Ib) and that has such a loud roar!!
“Rawr~~~~~~~” The roar of Steller’s sea lions sounds just like one of the monsters on the Ultraman show (Japanese TV show with special effects, which a super hero fights against “Godzilla-looking” various monsters). The huge sea lions do a handstand, clap their hands, and are surprisingly agile. 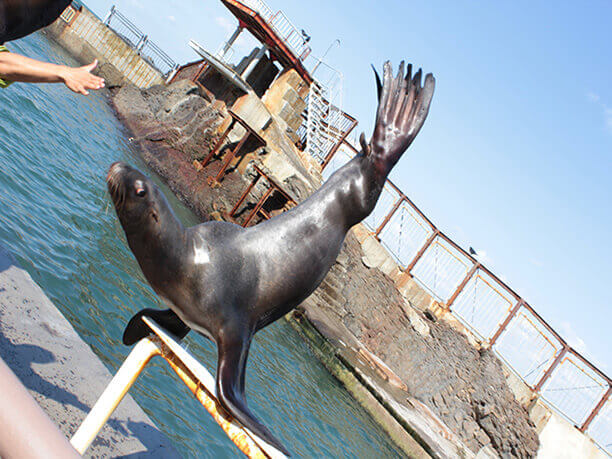 The finale is the jumping show. The Stellers’ sea lions jump off the jumping board one after another, making a big splash.
The best part is seeing the sea lions’ flying in the air. 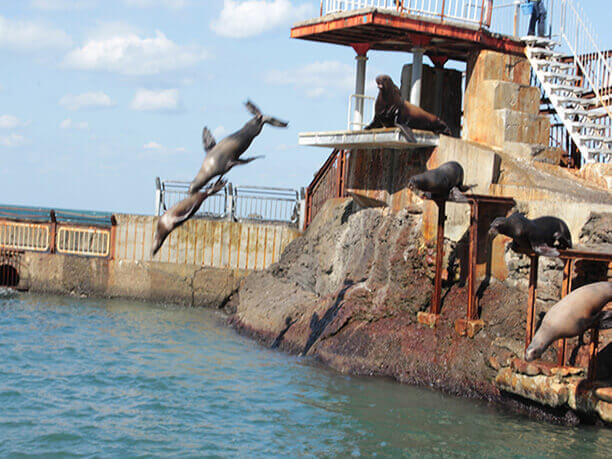 The show runs twice a day; one in the morning and the other one in the afternoon.
Each show has a set time to start but if you go to the aquarium to fit with the show schedule, you can see other shows in the order. 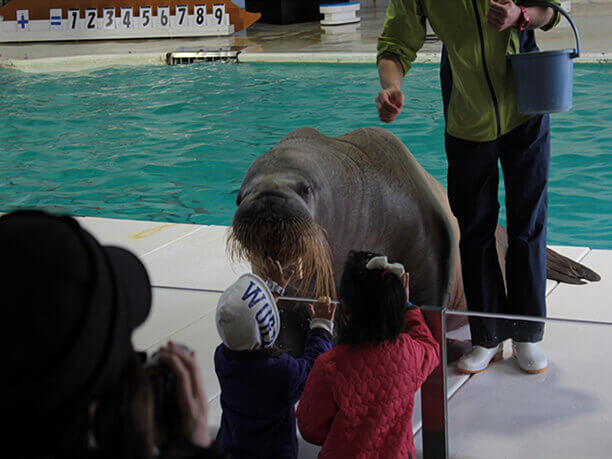 The walrus and South American sea lion shows are held at the dolphin stadium.
Walruses are charming despite their giant bodies.
Some people from the audience are chosen to be kissed by a walrus.
You can choose either your check or hand, and a smack! An Otaria that is in the sea lion family is good at using a ball and playing ringtoss.
The Otaria very adroitly catches the ball and the ring that are thrown by a visitor.
Even if you have bad aim, don’t worry. The Otaria will catch it for sure if it is within the pool. 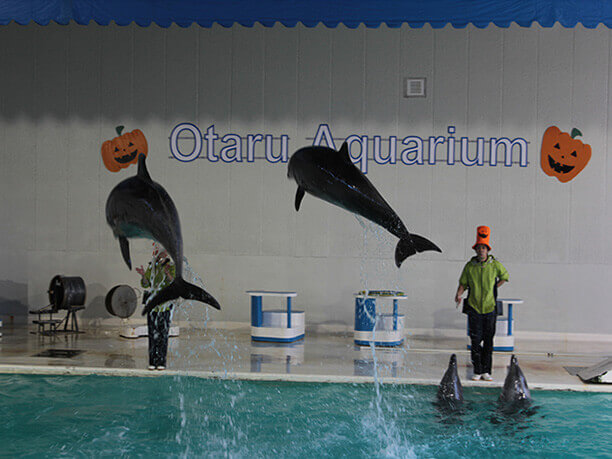 The highlight of the show is the jump above all!
The large bodies of the dolphins appear out of the water all of a sudden, show you the long-air-stay-jump as if they were flying.
The dolphins come out of the left corner of the pool, make a jump in the middle, come out the right corner next time before you realize it, and make another jump toward the left.
The two dolphins show you fantastic jumps in total synchronization.
You will be impressed by their high physical and mental ability. 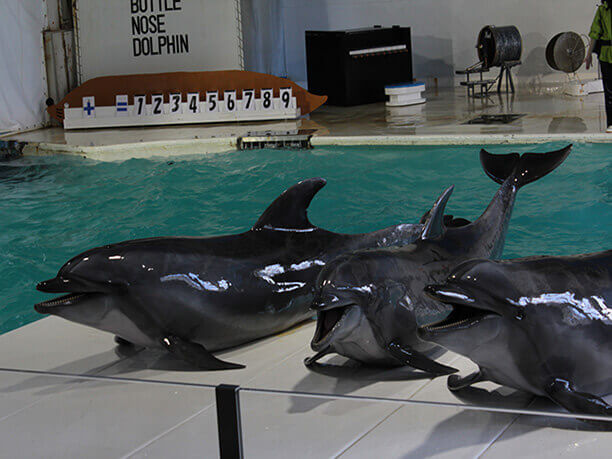 By the time the show is over, the cute dolphins will look much cuter to you.

It is always better to see the show as close to the front as possible to enjoy a dynamic and powerful performance. But be careful with the dolphin shows because they make a big splash.