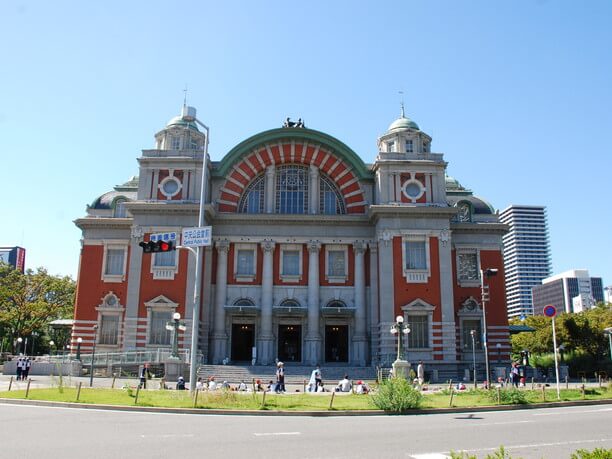 Walking from Umeda(梅田) at the center of Osaka (Kita area), it is about a 15-minute walk to the Osaka City’s Central Public Hall(大阪市中央公会堂). It is nestled between the Tosabori and Dojima River sandbars in the Nakano Island area.
The building stands out when compared to others in the area. It is a stately building in a beautiful form that was built in 1918.
It was used for more than 100 years as a concert and lecture auditorium for the citizens of Osaka. It was built with the donation of an Osakan stock broker, Einosuke Iwamoto.
It has been visited by many famous people.
It was renovated in 2002. It is as beautiful now as it was when it was first constructed. It is considered an important cultural asset of the country.
There is a gallery you can visit and tours of the area including the museum and facilities that are used for special events and general public meetings. There are 17 rooms used for meetings and conferences. 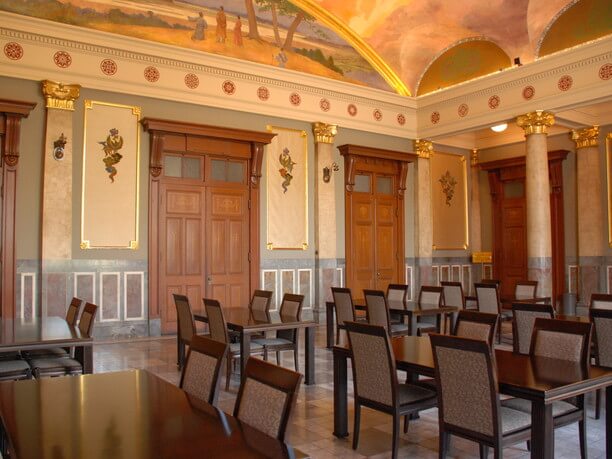 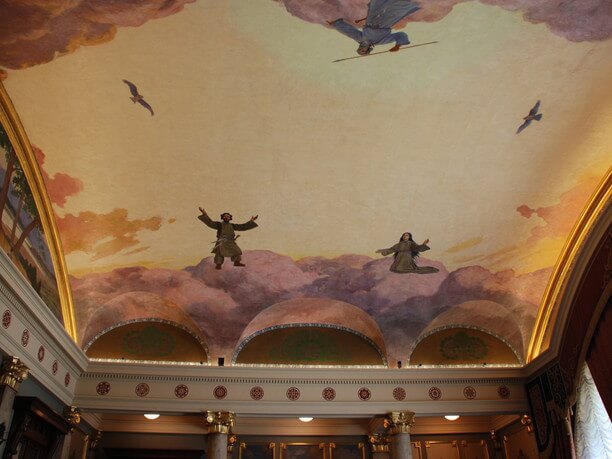 This special room was originally a VIP room and is luxurious throughout. You can visit this room during the guided tour.

On the ceiling, there are murals by the painter Hisashi Matsuoka (松岡壽) depicting the myth of Japan (Tenchikaibyaku)(天地開闢). Illustrated is one of the characters from the myth (Susanoonomikoto)(スサノオノミコト) and Emperor Nintoku (仁徳天皇).
The vivid colors were restored during the renovation and are very beautiful. 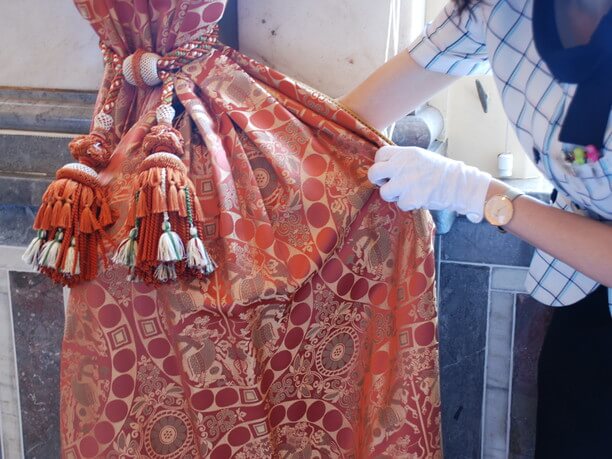 The curtains are a reproduction of one of the pattern designs of the Gallery of Horyu Temple. 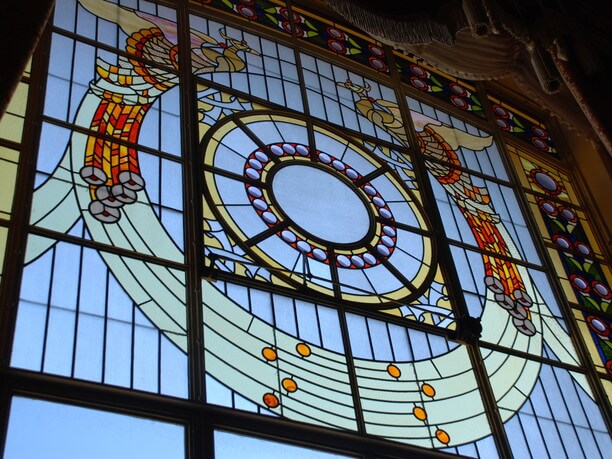 There are large stained-glass windows with the Osaka City’s “miotsukushi”(water marker) incorporated into the design. The green around the water’s edge looks beautiful on the outside of the window.

This renovated building is filled with attractions! 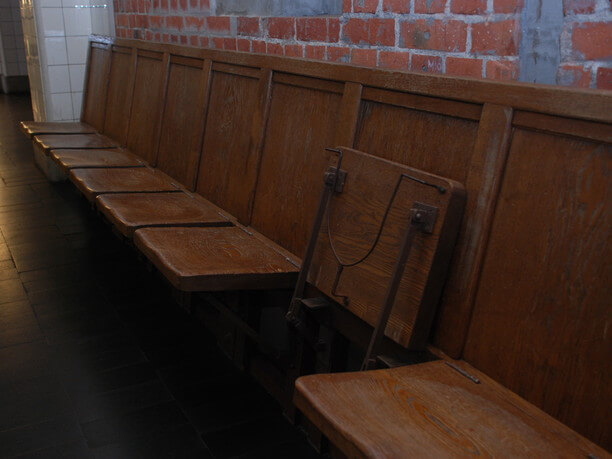 Built-in along the corridor are chairs that were actually used in the original meeting room on the second floor. Underneath the seats, there are racks that were used for men to store their hat when meeting. It was an exciting time during the age of Taishou era when men were becoming modernized and started to wear western style clothing. 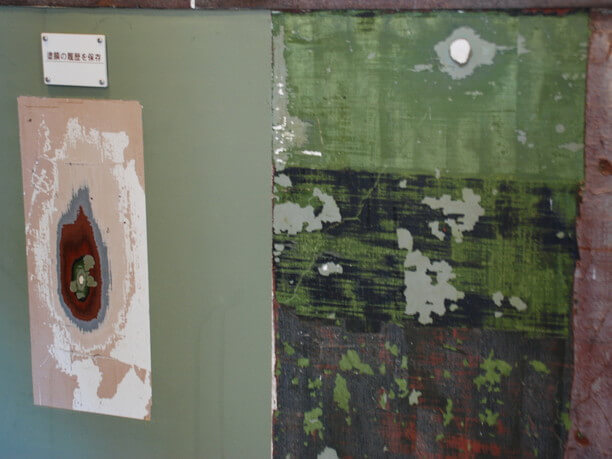 There are places to show you the color changes that occurred during the restoration. 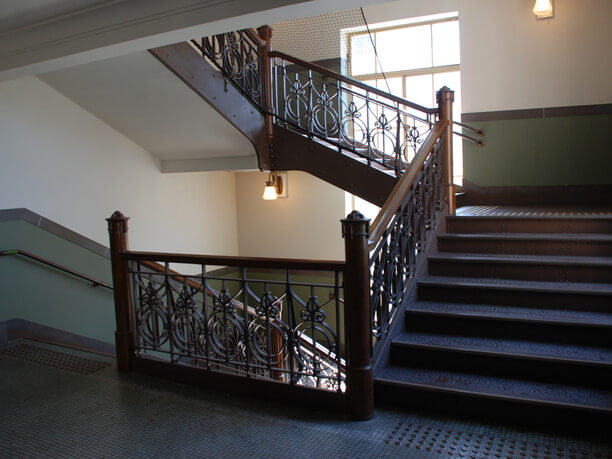 The nonchalant sash and railing designs are retro and stylish. The stair railings are a combination of warm wood and beautifully shaped iron.

It produces a lively atmosphere that has been used for the filming of several movies and TV dramas.

Feel the weight of history in this free exhibition room! 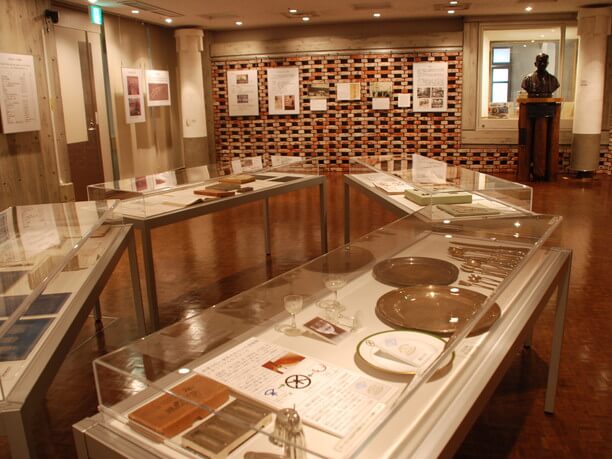 On display in the museum is silverware that was used for formal events and parties of the time.
You can visit the exhibition hall and see historical documents from the Foundation that still seem to give off a dull glow. It is a wonderful combination of historical materials and modern architecture from around the region.
On display is the sculptured bust of Einosuke Iwamoto. He died without seeing the completion of the Osaka City Central Public Hall. His hefty donations made the dream of an auditorium and meeting place for citizens Osaka a reality.

Back then Osaka was called Dai-Osaka (big Osaka) because it was the center of economic life in Japan. 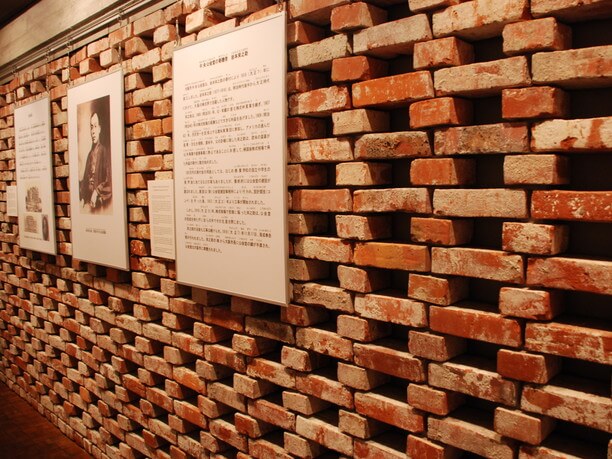 Near the recreation area you will find the rose garden and Museum of art! 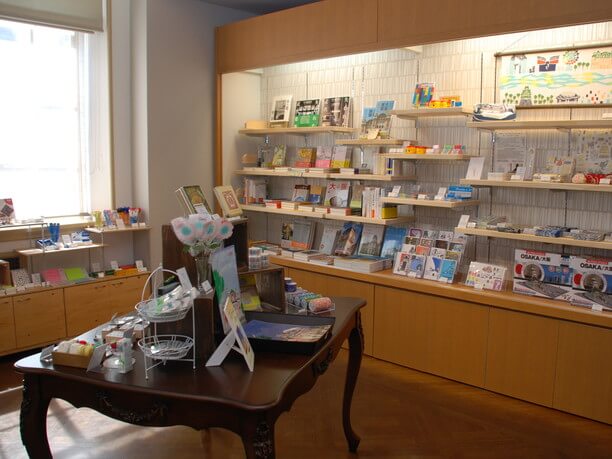 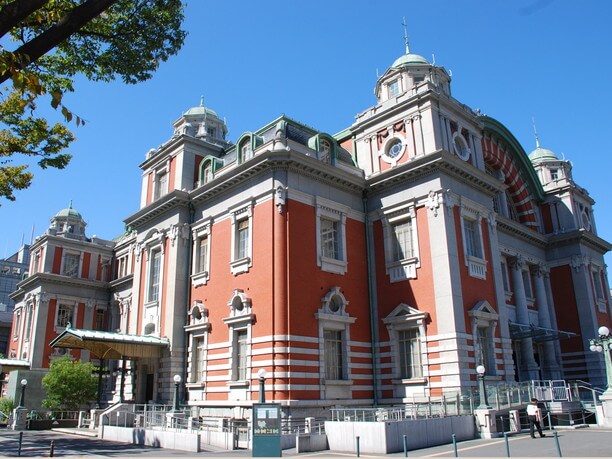 Throughout the year, they light up the area facing the Tosabori River recreational park and highlight the rose garden, restaurant and the Museum of Oriental ceramics.
It is accessible on foot from the Umeda, Kitahama, and Yodoyabashi railway stations, so it is very convenient.

Known as one of Osaka's best modern architectural structures, it is an important cultural asset in the country. It is a place that citizens can feel free to rent the facilities. It’s luxuriously decorated meeting rooms display the handiwork of craftsmen of the good old days.

Price
Fee for the use of facilities such as conference rooms, auditoriums