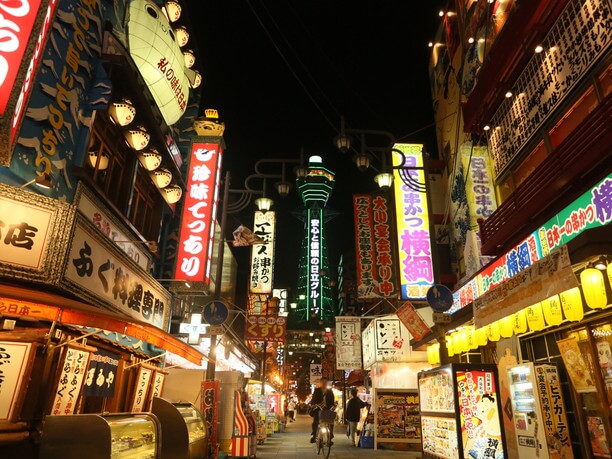 If you go to the New World (新世界) from the North take the Sakaisuji subway line to the “Ebisu-Cho” (恵比須町) station. If you want to go from the south start at the Tennoji Terminal and take JR Osaka Kanjo line to the “Shin-imamiya” (新今宮) station or the Nankai main line to “Shin-imamiya.”
Abeno Harukasu and Tennoji Mio are spots that are becoming more popular with young people. The New World expands outward from the Tsutenkaku Tower (通天閣) in Osaka’s Central tourist area. It is a different type of atmosphere and is known as a popular food street with its many kushikatsu stands, popular stage shows and chess clubs. You can truly experience the culture of Osaka here.
You can get there by traveling the Hanshin Expressway on the east side of the Tennoji Zoo. Or you can take a nostalgic tram ride on the Hankai tramway on the west side of the Sakaisuji line.

Know the 100-year history of the new world from its beginning. 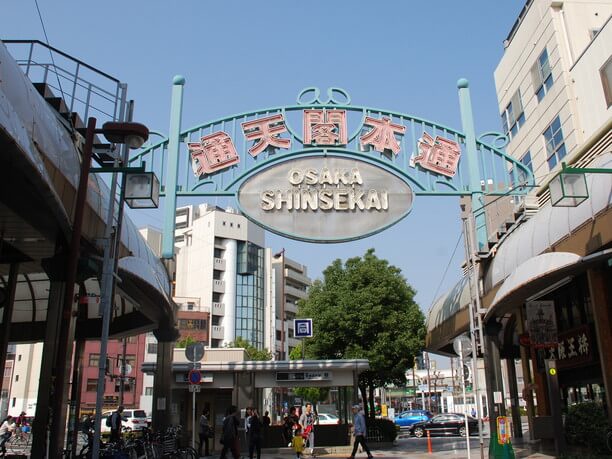 If you start by knowing the history of the area you will better enjoy your visit to the new world.
This area was the site for 5th annual national exhibition in 1903. It was reopened in 1912 as the ‘New World.’ The New World has buildings that mimic famous buildings from around the world.
There was an amusement park opened along with the first, Tsutenkaku tower at this time. It was known as “Luna Park,” and fashioned after the city of Paris. It consisted of various buildings and attractions and a shopping mall that soon became a major tourist attraction.
Though Luna Park was eventually closed, playhouses, movie theaters, restaurants, and many shops still remain.

The Naniwa Club is a popular theater with exceptional entertainment attractions! 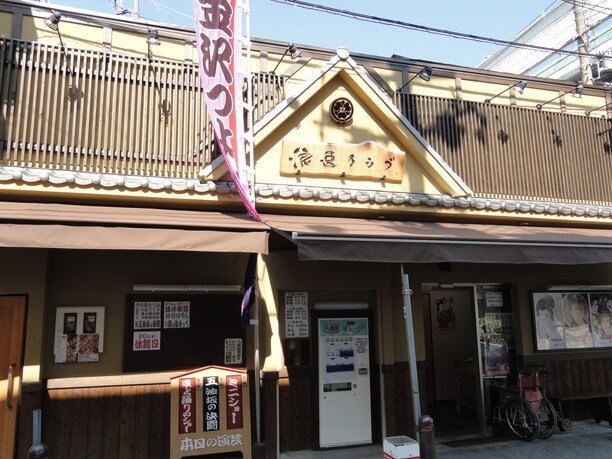 The New World has been called entertainment district and the Naniwa Club (浪速クラブ) is one of the main reasons why.
The theater stands out with all of its flower decorations and strung banners with actor’s names written on them that were gifts from the fans.
Every night tension builds as fans wait to be admitted in for the night’s performance. They buy their ticket for 1200 yen and go inside to a theater that gets chock full of people.
The plays, the singing and dancing and colorful stage presence captivates the fans.
Each night fans are allowed to come to the stage to tip their favorite performers.
Every Month it is a new performance group and the show is different every night.
There are many local fans as well as customers that come from far away that continue to show up for their favorite performers.
Many actors from this historic theater have gone on to become famous performers.

Smart ball is an adult game of skill from the Showa era. 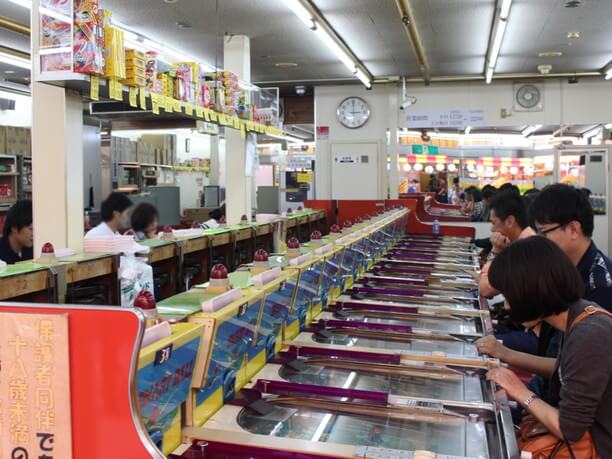 Smart ball is a game that is only played in Osaka. One of the most popular places to play it is at the “Smart Board New Star” (スマートボールニュースター) playground.
Smart ball originated in the early Showa period. It basically is a game of skill where you slingshot balls onto a board and try to get them to go into the holes. You can win freebies such as candy depending on the number of balls that you get into the holes. 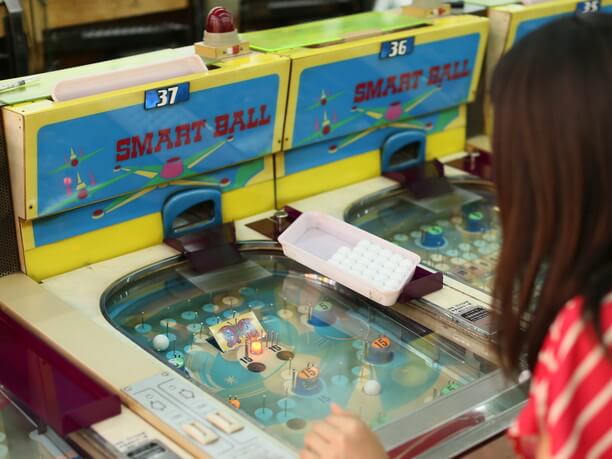 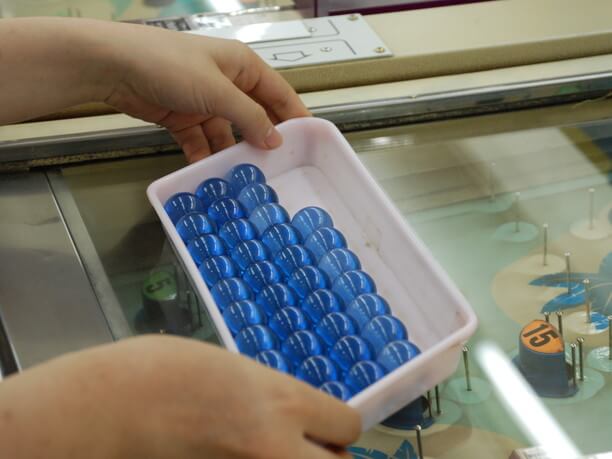 You start the game with 25 balls for 100 yen.
Anyone can play and once you taste the excitement of playing this game with its simple rules you can really become addicted.
However, you must be at least 18 years of age to play!

Visit the monument honoring Miyoshi Sakata who was the Shogi (chest) master in the Taisho period. 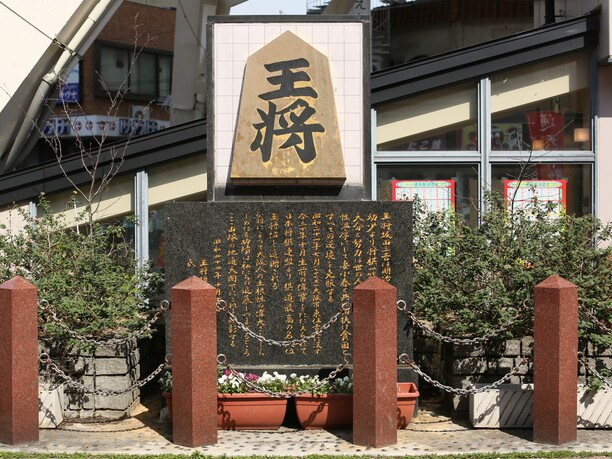 At the foot of the Tsutenkaku tower there is a stone monument in honor of Miyoshi Sakata (阪田三吉). He was a chess player from the Meiji era to the early Showa era. Miyoshi Sakata, was honored nationwide because of his strength and skill at chess. Even after his death he has been honored in theater, in film, and in song.
He was also awarded the titles of meijin and ohsho from the Japan Shogi Association.
During the early Showa period, Shogi was a very popular as a simple pastime. There were several chess clubs in this New World, but today there is only 1 club remaining.

There is an innovative fortune roulette wheel made of stone at New World’s Inari Shrine. 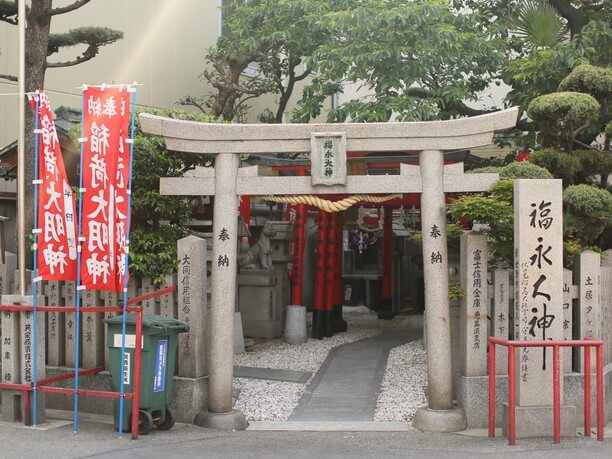 The New world’s Inari Shrine is located approximately 150 feet North of the Tsutenkaku tower.
It attracts visitors from the neighborhood that have faith in the god of prosperity.
This small shrine was erected near the Tsutenkaku tower in 1912.
During the winter festival in February it is always crowded with lots of worshippers. 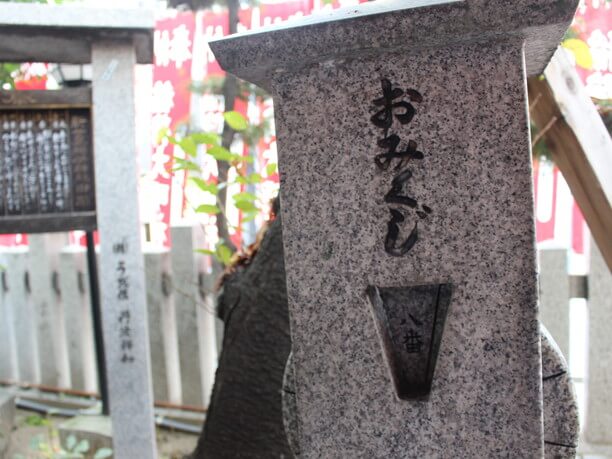 This fortune roulette wheel made of stone is very popular.
To tell your fortune you spin the wheel then check at the table next to it to read the fortune you get that corresponds to the number that you spun on the wheel.

With its city hot springs, fast food, as well its popular drama and chess from the Showa period Osaka continues its tradition of excellent, highly original entertainment.

Close
Irregularly (once a month)