Osaka is known as the “gourmet city” and is a wonderful place to experience delicious gourmet dining.
It has an excellent combination of classic tourist destinations and new spots that are becoming very popular with the tourists.

Tourists from around the world come to Osaka Castle! 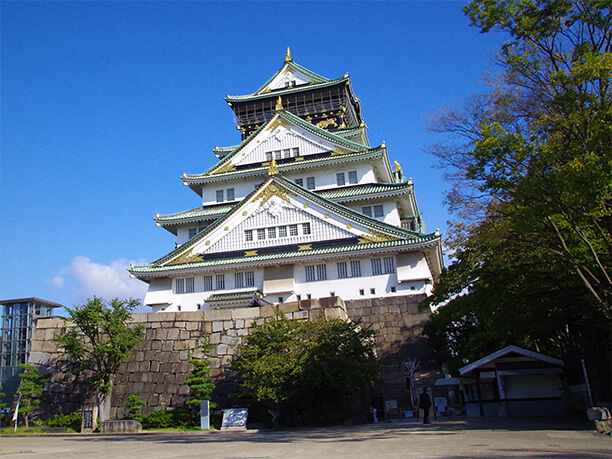 When people are talking about Osaka Castle (大阪城), many associate it with the famous warrior Hideyoshi Toyotomi (豊臣秀吉). But in fact, the castle was built during the Tokugawa era, long after Hideyoshi had died.
The castle was reconstructed in the beginning of the Showa era. At that time they added the Castle Tower, and the Museum.
The castle which is surrounded by the vast Osaka Castle Park is considered a symbol of Osaka.
It is loved by the public and attracts many tourists every day from all over the world. 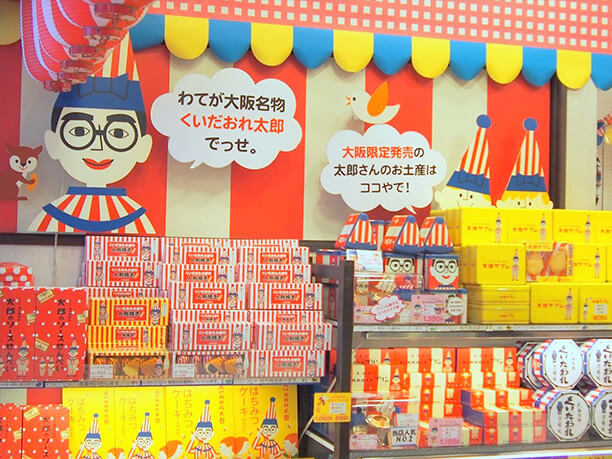 As you enter the Nakaza Kuidaore building, you will see plenty of kuidaore taro (くいだおれ太郎).
You will also be able to find everything from popular Osaka souvenirs to gourmet food. There is even live comedy crammed with plenty of Osaka charm!
This is a highly recommended tourist destination where you can experience the essence of Osaka culture. 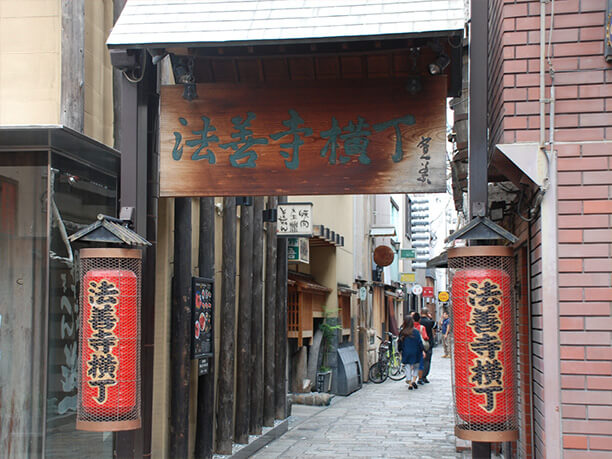 As you pass through the gate of Hozenji (法善寺) street you will enter another world where cobblestone alleys are lined with restaurants and food stands. These shops are serving popular items such as skewered katsu, and other rich culinary art.
There is also plenty of adult bars to complement the wide variety of gourmet food stores.
On the street, there is a mizukake-fudo (alter) that sits quietly in the corner wrapped in green moss that grows from the water that people pour when they come to pray.
It is a tourist destination that began during the Showa era, and continues to attract many local and foreign visitors.

Enjoy the Nature and history of Osaka Castle Park! 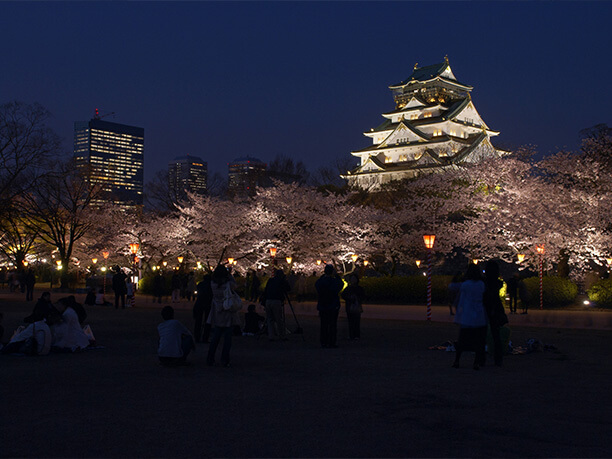 Located in the heart of the city, Osaka Castle Park (大阪城公園) is a nature commune. With its many plum and cherry blossoms, it is one of the best tourist attractions.
Locals enjoy walking, jogging, and bird watching here.
The Castle Park is centered in the Honmaru and Ninomaru regions. An area that is dotted with old buildings besides the Castle Park that are important cultural assets.
The extensive grounds are not located close to any station but it is worth going a little out of the way to experience this beautiful place.

【Spot name】Osaka Castle Park
【Address】Osaka Castle Chuo-ku Osaka-city Osaka
【Hours of operation】
Park
24 hours free entrance
Osaka Castle
9:00a.m. to 5:00p.m.
※Admission until 30 minutes before closing. Extended opening hours depending on the   season a
Nishinomaru garden
March-October 9:00a.m. to -5:00p.m.
November to February 9:00a.m. to 4:30p.m.
※Last admission until 30 minutes before closing .When the cherry trees are in blossom the hours the park is opened are extended.
【Closed】
The Park is open every day
Osaka Castle is closed at year’s end and new year holidays (12/28-1/1)
Nishinomaru garden is closed on Mondays and Holidays and at Year’s end and new year holidays (12 / 29-1/3)

Tsutenkaku Tower is a 100-year old tourist destination that overlooks the New World. 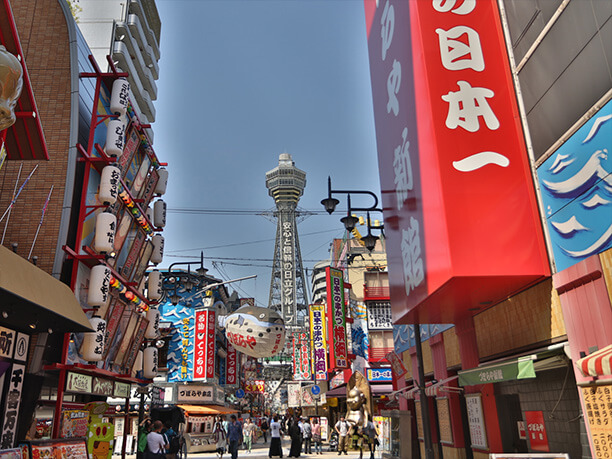 The first Tsutenkaku (通天閣) tower was built in 1912 when the New World was opened.
This beautiful tower was built with an Eiffel Tower motif and surrounded by Luna Park and a shopping mall.
In 1943 it was damaged in a fire and dismantled the following year. It was rebuilt in 1956 by donations from local volunteers. When they rebuilt the tower they added a weather forecast sign, Biriken-dou Hall at the summit, and a neon advertising sign.
This familiar landmark has been a very popular destination for nearly 100 years!

You can find everything you need for your kitchen at the Kuromon street market! 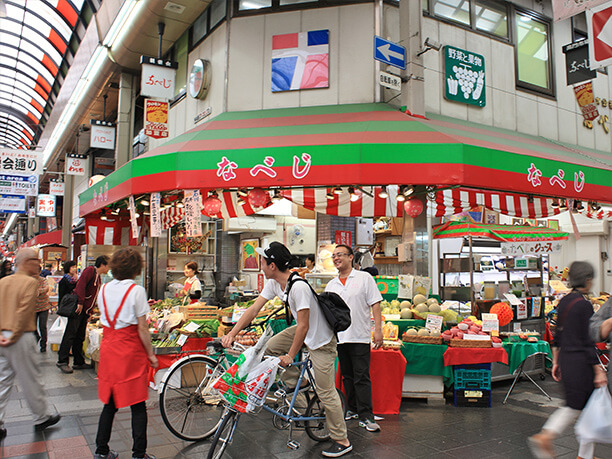 This market started in the Edo era in front of the Enmyo temple(圓明寺). It got its name from the fact that the market was first located behind the black gate of the temple.
It overflowed with the local fish merchants during the Edo period.
Today the market is lined with nearly 200 shops selling fish, meat, vegetable, sweets and daily necessities. You can literally find whatever you might need for your kitchen! They even have a puffer fish and whale meat shop that is unique to Osaka!
Highly recommended are the meat croquettes and tuna bowls that are made with carefully selected ingredients.
The market is close to many other Osaka stores so you can eat on the fly while you shop.
This market is becoming increasingly popular with tourists and well worth checking out! 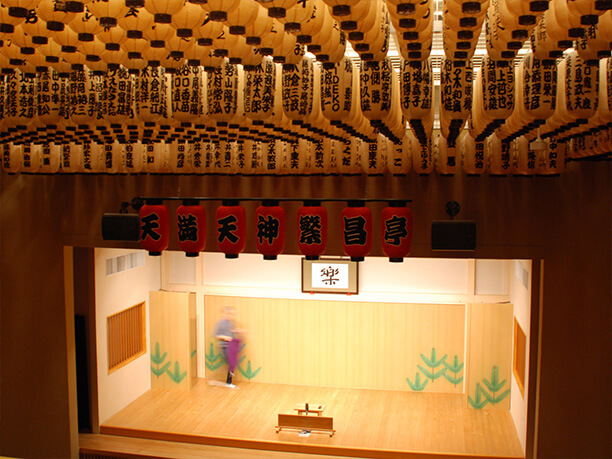 The long awaited opening of the Kamigata rakugo theater (Tenmatenjinhanjoutei) (天満天神繁昌亭) happened in 2006. This vaudeville-style theater offers daytime and evening performances that attract many storytellers’ fans and tourists.
This intimate 200-seat theater allows the audience to really feel connected to the storyteller, making the performance that much more exciting.
There are 1500 lanterns hanging from the ceiling with names of businesses and citizens who donated money for the construction of the theater. These lanterns serve as a reminder of the strong affection that the people of Osaka have for their storytellers.

Enjoy the walk from Umeda to the Nakanoshima Island area! 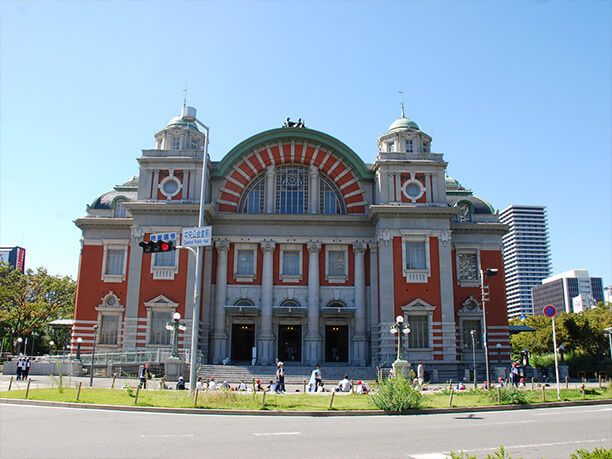 From Umeda walk West toward the Ohe bridge (大江橋) that passes over the Dojima River to the Nakanoshima area. Continue walking forward towards the East and you will see behind the stately building of Osaka City and the prefectural library the beautiful neo-Renaissance style Osaka City Central Public Hall.

Come explore the Osaka historic district of the New World! 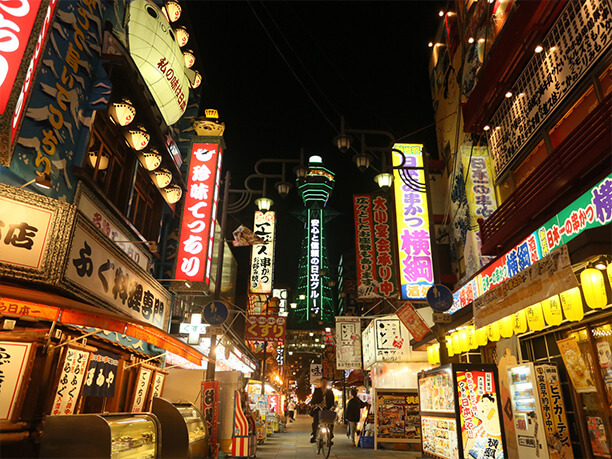 Following its use in 1903 in the 5th annual national exhibition, the New World was opened in 1912.
The shopping mall, amusement park “Luna Park”(ルナパーク), and the first Tsutenkaku was designed to simulate the urban area Paris.
After the amusement park closed, the site became a gathering place for playhouses, movie theaters, and restaurants.
It is conveniently located and can be accessed using the Tennouji Terminal. You can use the subway, the Nankai line, or the Sakai line to get there. 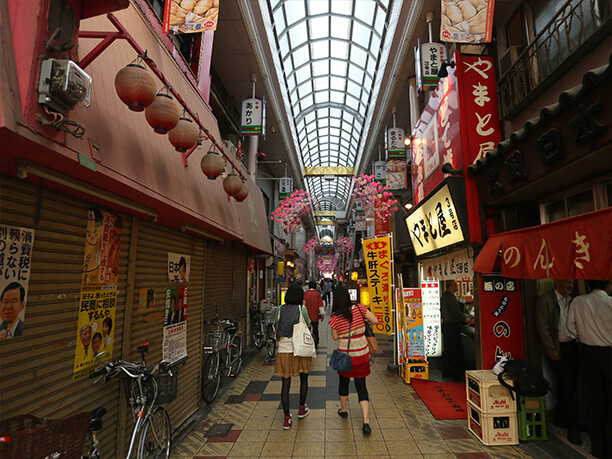 “Janjan alley” (ジャンジャン横丁) is a small shopping street located in the southern part of the New World.
Here you will find gourmet shops, such as sushi restaurants on both sides of the road.
It is a popular tourist destination where you can enjoy skewered katsu-ya and drink beer anytime of the day.
This Showa gourmet shop area was once only popular with city workers, but lately more young people, women, and tourists come to enjoy this cheap, clean and friendly atmosphere.

With over 1,000 animals of about 200 different species, this Osaka zoo boasts of a 100-year-old history as a classic tourist destination. The Tennoji Zoo (天王寺動物園) is Japan’s third oldest domestic breeding facility for animals.
With over 1000 animals of about 200 different species, this 26-acre zoo is a very popular destination for locals and tourists.
It recently celebrated its 100th anniversary in January of 2015.
Couples, as well as families, come here to enjoy the “ecological exhibitions” that recreate the natural habitats of so many animals.
There are cute log cabin-style restrooms.
Strollers are available for rental at a reasonable price. 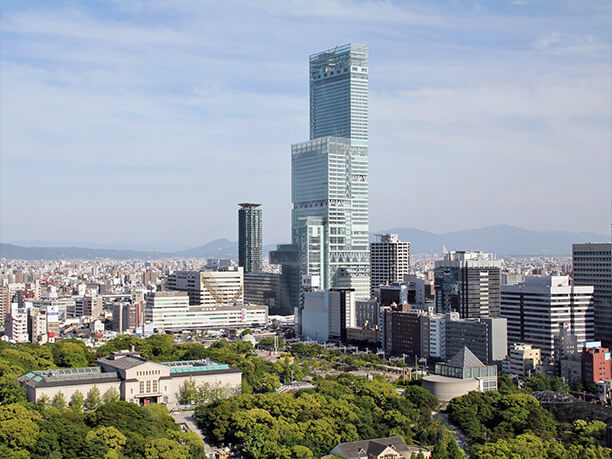 Opened in the spring of 2014, Abeno Harukasu (あべのハルカス) boasts of being the tallest high-rise building in Japan.
Abeno Harukasu is home to the Kintetsu headquarters, as well as having museums, restaurants, hotels, and many popular stores.
The Designation 300 observation deck on the top floor, overlooking the Kansai region has a 360-degree panoramic view that is breathtaking!
This building has a convenient location, with easy access from the JR subway Tennoji station and Kintetsu Abenobashi station. It is walking distance from the Tennoji Zoo and the Tsutenkaku tower.
It is considered as the new base for a tour of Osaka.

Experience the invention that changed the world of food! 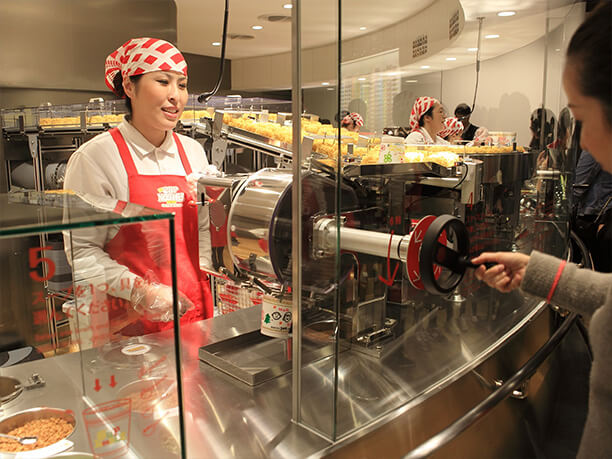 Momofuku Ando created instant ramen in a small shed in Ikeda City (池田市). It was the world’s first “instant chicken ramen.”
You will have the opportunity to feel the spirit of the invention in the Instant Ramen Museum.
You can learn all about how Ando invented “chicken ramen” and “Cup noodle” at the inventions exhibition and theater. In fact, you can actually experience making the instant ramen.
This is an educational and fun tourist destination!

You will be mesmerized by the amazing night view from the floating garden Observatory! 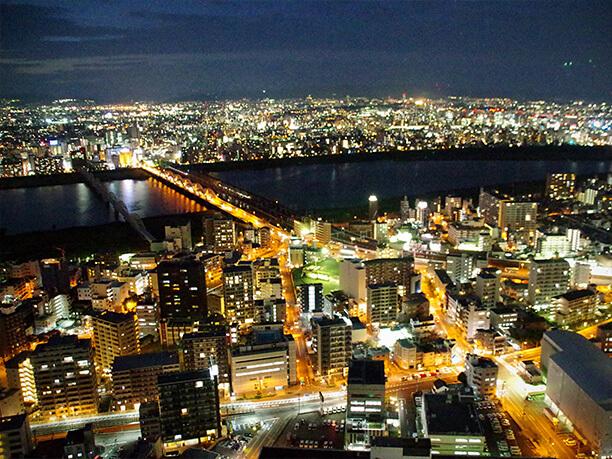 The “Umeda sky building” (梅田スカイビル) is a 40 story skyscraper with the “Floating Garden Observatory” where you can feel the wind on the open air roof.
This amazing observatory offers a 360-degree view of the city below. It is recognized around the world as a popular tourist spot. It is also recognized as one of Japan’s top 100 spots for viewing the sunset.
It is truly an unforgettable Osaka tourist attraction.