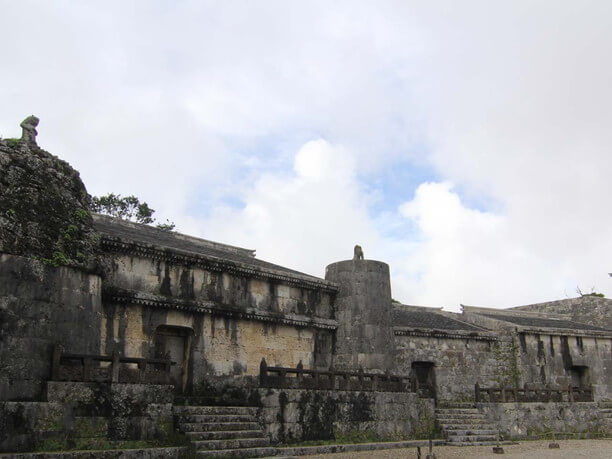 The entrance fee is only 300 yen.
When you learn about Shuri you will need to know about the love-hate drama that has been hidden in the royal tomb. This drama of Ryukyu-Okinawa started in 1501. 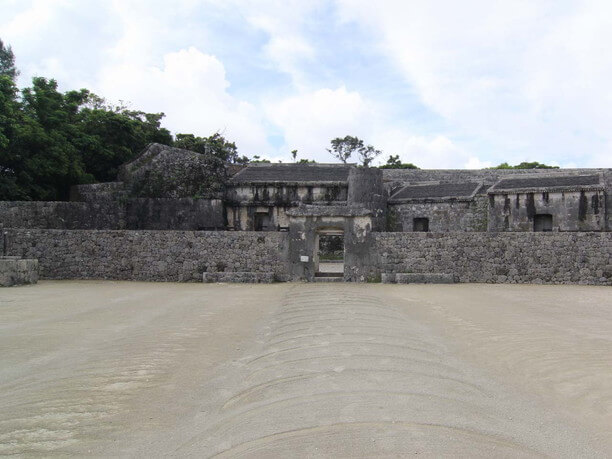 The love-hate drama surrounding the throne

First, let’s recap the history of Ryukyu.
Okinawa, the main island had been unified by Zhongshan king-Naotomoe Zhi in 1429. In 1470, Kanemaru was a senior statesman who was planning to overthrow the throne. He developed diplomatic relations with China claiming himself as heir to the throne. Naotomoe Zhi declared him the second in the royal line. When Sho En died in 1477 his son, Sho se ni was coronated. but his reign only lasted 6 months before he was overthrown. In his place, Shoshin, a son of a Ogiyaka a different wife of the King took the throne.at the age of 12.. Tamaudum is the name of the monument that was built as a burial site for King Sho En.
The replacement drama by this half-brother has been seen as the result of the actions of empress dowager Ogiyaka. This information is written on the left-hand side of Tamaudun inner gate of a “Tamaudun monument”.

Listed on the stone in the monument is the name of King Shoshin and eight others. In addition to the inscription of the names of those buried in Tamaudun, the following words are written: “If looking up to heaven, shalt curse and bowed down to the ground” It should be noted that Sho se ni’s name and the name of his daughter were not inscribed on the stone. Only those that draw the blood of Ogiyaka were listed on the stone. 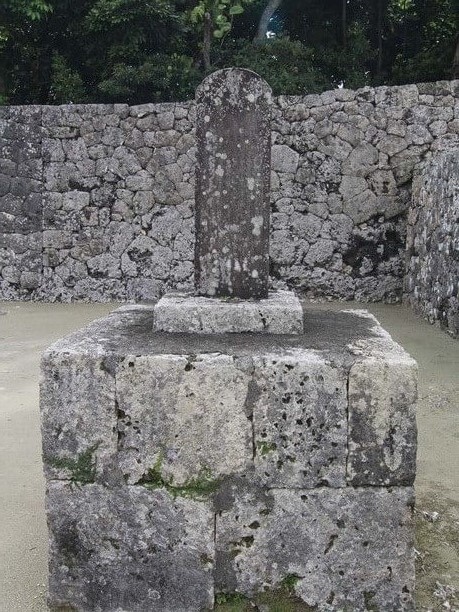 King Shoshi was a virtuous ruler who accomplished many great things. One of his acts was to abolish of one of the reasons for martyrdom. At the time, when a high-level person dies, If the wife is without children, she and her servants were required to take their own life. When his mother died Shoshin commanded, “So far there is no need to martyrdom we will save the life of the maid and servants”
Shoshin must have had complex feelings about his parents if it was his decision not to place his mother’s bones at Tanaudun.
There is another mystery to Tamaudun. There is a bone jar that no one knows whose bones are in it. 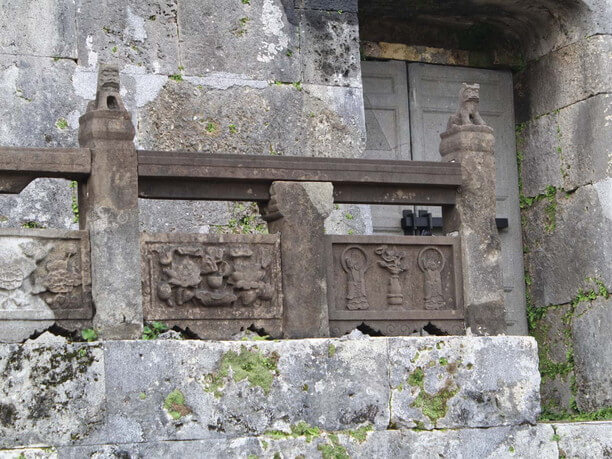 Loyal, Futochi Mukuta defends the royal family even after his death!

In the Ryukyu, a long time ago when someone died the traditional burial rite was to leave the body for years then remove the skin, wash the bones and place them in a bone jar. Today cremation is the traditional way.
There is a door in the middle of Tamaudun opening to a space to store the bodies. One of these Jars is a mystery in that no one knows whose bones are in the jar.
Since the king, the queen, and relatives’ jars are placed separately in the East and West room it is a strange story that there is only one shrine jar in the middle chamber.
According to tradition, this shrine jar holds the bones of Futochi Mukutais. A loyal servant who looked after the family even after death. 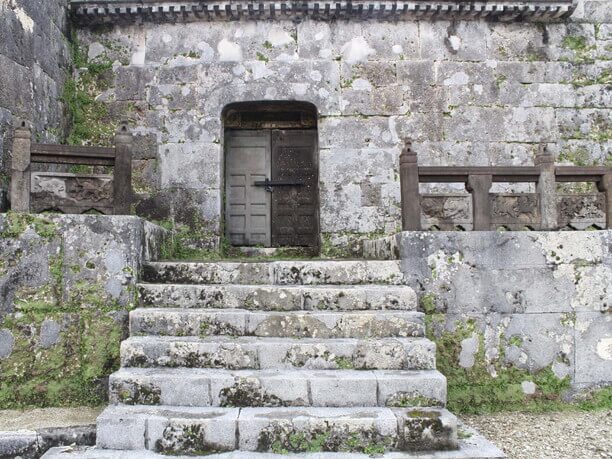 Learn the appearance of the old days of Shuri Castle.

You can learn the about the appearance of the original Shuri Castle in Tamaudun. The original Shuri Castle burned down in a fire. In fact, it has been rebuilt several times.
The currently Shuri Castle. lacquered in red tiles that have been restored, is a model of the castle that was built in 1712. Before that, it was built with black tile. before 1671 the roof was made of wood. The 1501’s Tamaudun was built. It was built in imitation of the Shuri Castle with the same type of wooden roof design.
A tomb shaped like a house with a roof is called a gable grave. Tamaudun is said to be the oldest gable grave in Okinawa. There is a large Schiesser riding on top of the roof, according to tradition it is there to keep an eye on the gate and be able to keep track of people coming in and out. Each time you go through the gate, you can feel Schiesser looking at you.

Drama after the disappearance Ryukyu Kingdom

When Ryukyu merged into Japan as Okinawa Prefecture in 1879 (so-called Ryukyu disposal), the royal family was expelled from Shuri Castle and forced to migrate to Tokyo. The last king of Ryukyu. King Shotai became the Marquis and passed away in 1901. Pictures of the funeral are exhibited in the material exhibition corner of Tamaudun.

King Shōtai and his oldest son, Shoten were buried in Tamaudun. King Shotai’s grandson Shosho Marquis (died in 1923) is located in Tokyo.
In 1945, Tamaudun partly damaged in the Battle of Okinawa. In 1972, at the same time, the United States returned Okinawa Prefecture to Japan, the ball mausoleum room as well as the entire Tamaudun was designated a national historic site.
In 1974 Mr. Sho Hiroshi, great-grandson of Shō Tai invested his own money to do the repair work to be completed over a period of 3 years. In 1992, Tamaudun was donated free of charge to Naha City. After Mr. Hiroshi died in 1996, he was buried in Izena Tamaaudun. Tamaryou has been registered as a World Heritage Site 2000 as “the Kingdom of Ryukyu Gusuku Sites and Related Properties”.
Tamaryou is the cemetery for the descendants that draw a royal blood. If you encounter people who are in prayer outside of the incense burner do not interfere with them or take a picture 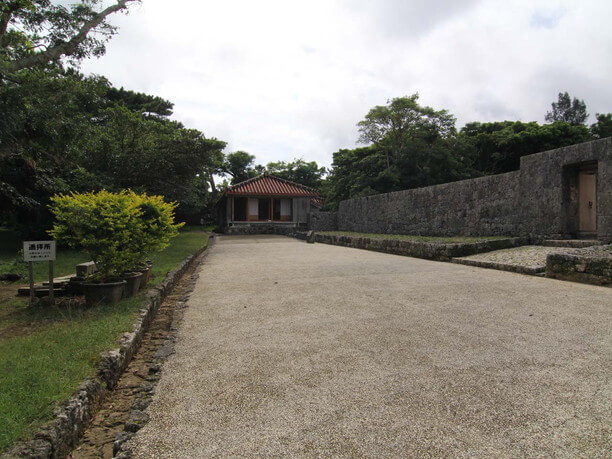 The inscriptions on the Tamaudun Monument are written in the text of kanji and kana. But by all means check it out anyway. There are also elaborate handmade stone carvings of the expression of Schiesser for you to see.