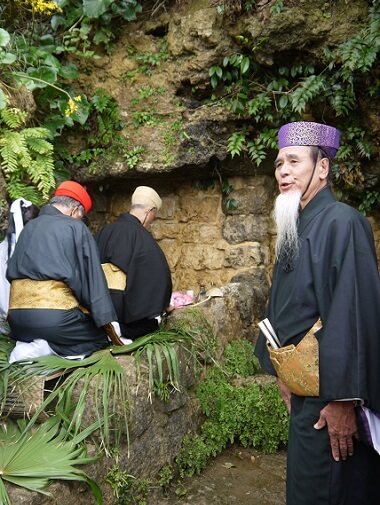 Water that governs their lives!

In the old days in Okinawa there was a festival of “Omizutori” in which holy water had been presented to the Castle of Shuri.
According to the legend, the water of Hedo, Okinawa which flowed from the Holy Land of the northernmost part of Ryukyu was delivered to Shuri Castle (首里城). The holy water is called “Yoshigomizu.”

It is presented at the time of the New Year celebration at Shuri Castle. For Ryukyu, the water was cherished as being responsible for ancient life. It was the “symbol of life.”

The precious water began its journey to be dispatched by the messengers on December 20 of the lunar calendar.
It would arrive on December 28 to the Engaku-ji Temple for dedication to the former King’s spirits and then arrives at Shuri Castle for the New Year’s celebration.

Bringing the holy water has become a long drama known as the “journey of the water.”

It dates back to the era of the dynasty!

At that time, the King of Ryukyu created urgent documents outlining the route and accommodations along the way to act as guard stations to protect this valuable delivery. This procedure was called the “inn following system.”
It takes time to get the water passed through all the appointed routes, but it had to remain on time. So sometime messengers had to run or even ride along their route to keep the procession on schedule. However, those days of this grand ritual disappeared over time.

But then the ritual of “Omizutori” was resurrected 16 years ago but was celebrated secretly until now.
There was a key player. “Wakamizu” It became known as wakamizu’s water and was carried by volunteers from all over.

So, by the enthusiasm of one, the water of the Ryukyu Islands was awakened. “And the little drop of water that is this ritual is going to certainly spread (largely in Okinawa) and again become a ripple.”

Spring water from a distant time!

The current ritual has 9 points of destination along the way. 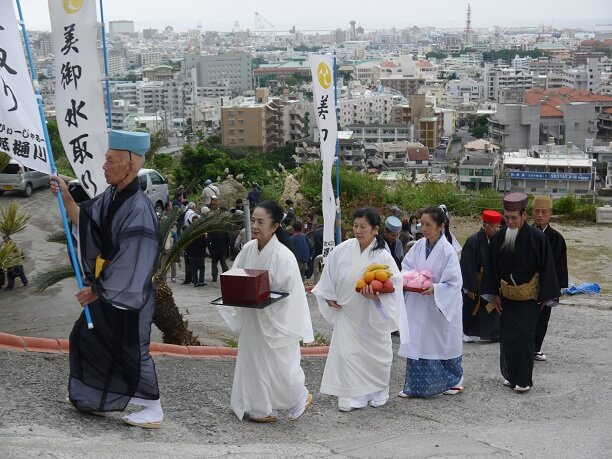 In Okinawa they sing the Ryukyu classic called Omoro. A large part of the song is about praising the dynasty.
The participants sing to God for a good harvest. After the song, a spiritual leader prays for the prosperity of the country.

This modern day reproduction does its best to observe the original ritual.
Spring water is stored and transferred like in the old days, bubbling with a splash of joy. 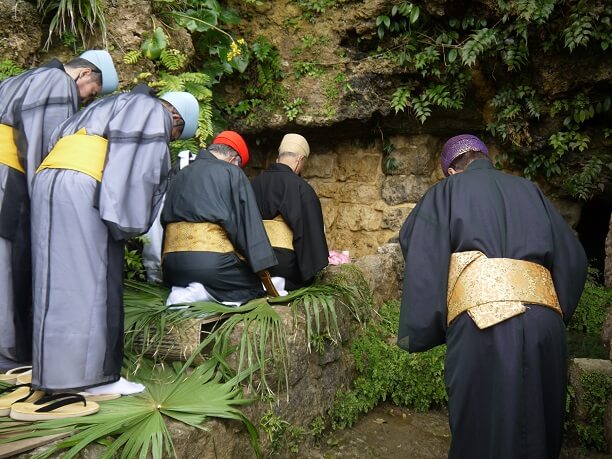 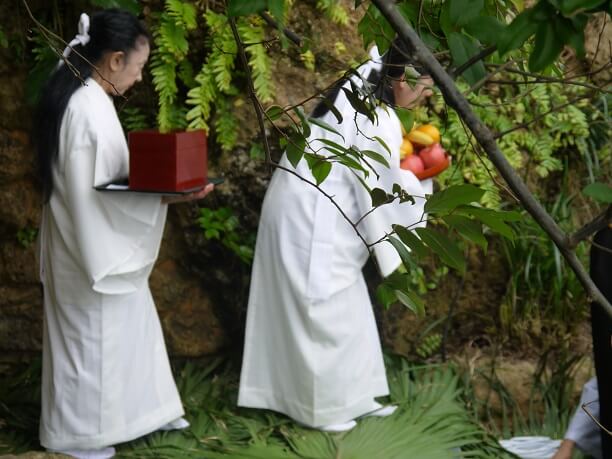 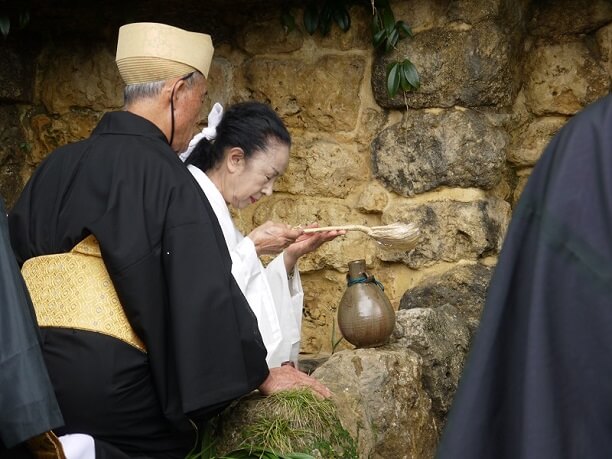 Spring water was pumped with a ladle of the Kuba leaves by the hand of a woman as the small jar sits quietly.
And then all head to Shuri Castle!

The water arrives at Shuri 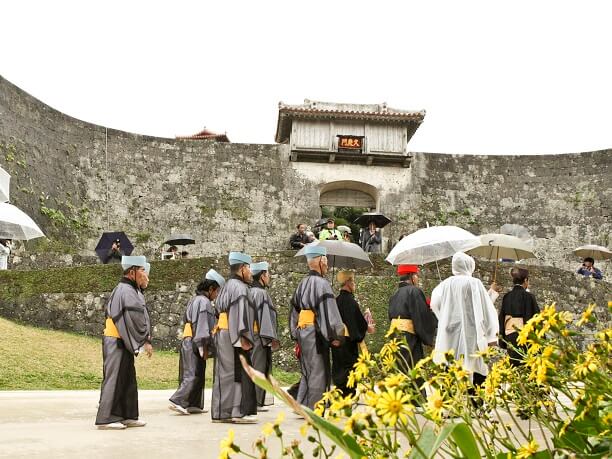 The water is delivered safely to Shuri city.
In Shuri the hospitality reception accepts the people with the water.
A welcome dance unfolds, welcoming with joy the arrival of water and entertaining the important guests.
At the end of a long journey, people take a moment to rest.
But it is still not finished! One more important thing to do.

The rain comes down as if washing away the stains of the previous year.
The travelers are joined by the women with “water from the lucky direction” that came from the tribute on the front gate of the Engaku-ji Temple. The line becomes much longer. 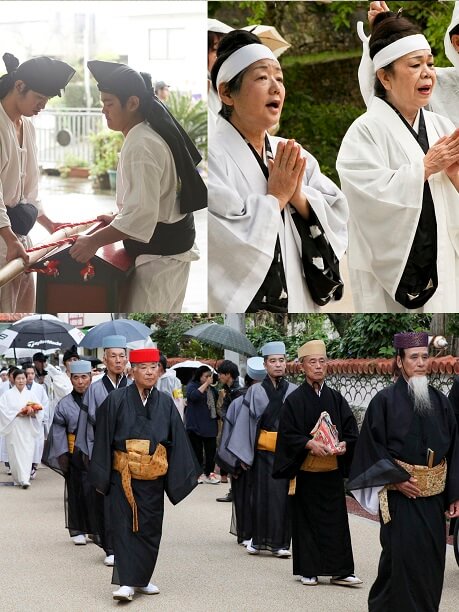 Here it is a celebrated ceremony to match the “water of Hedo” to the”water of the lucky direction”.
“Rain wets the green of the trees in silence.
The Smell of the forest wrapped deep in prayer.
Birdsong sounds like they are welcoming the willing messengers of fertility from the north.” 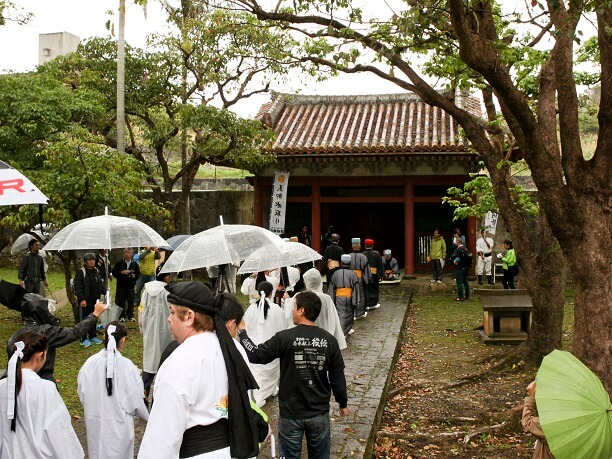 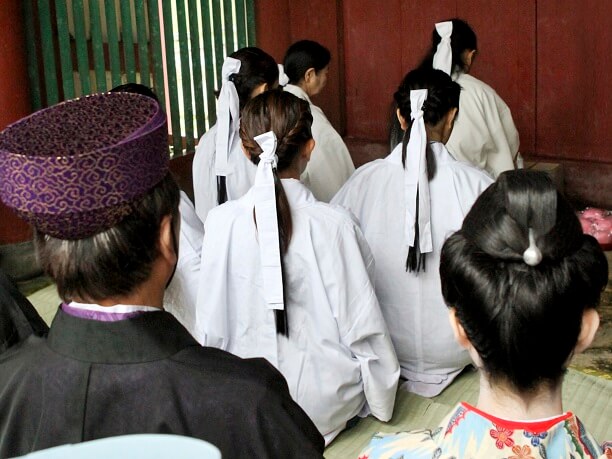 The combined waters have become the holy water. A long queue is formed to walk to Shuri Castle.
The voices of women who sing the Quena create a continuous loop of magical melodies.

It seems to sync consciousness from beyond time, guided by their voices.
the procession follows the route once walked a long time ago.

They arrive at last! 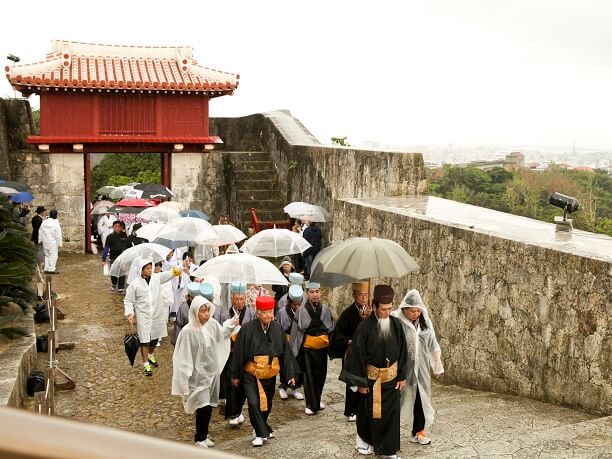 As they climb the stairs of the wet stone pavement, the Tower entrance is like an opening to another dimension.
At a small entrance under the Shuri Castle, there are two people (ladies-in-waiting) ready to accept the holy water. 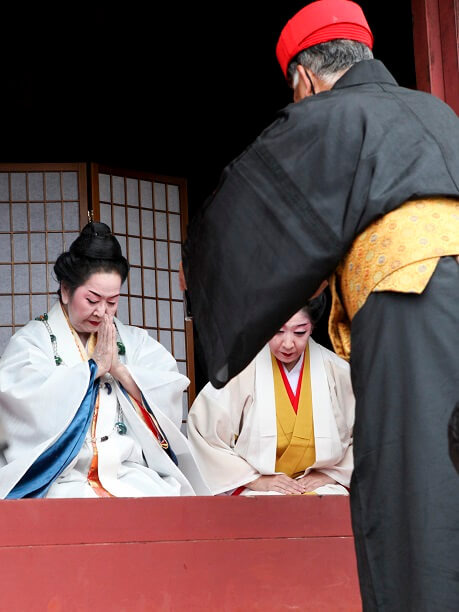 Holy water was safely handed over to the Ryukyu dynasty.
Holy water from Okinawa’s northern limit of Amamikiyo, after a long journey
passes from one person to the next, while more prayer is given.
The ritual concludes with a prayer of hope for health, longevity, fertility, and prosperity for the million people of Okinawa. 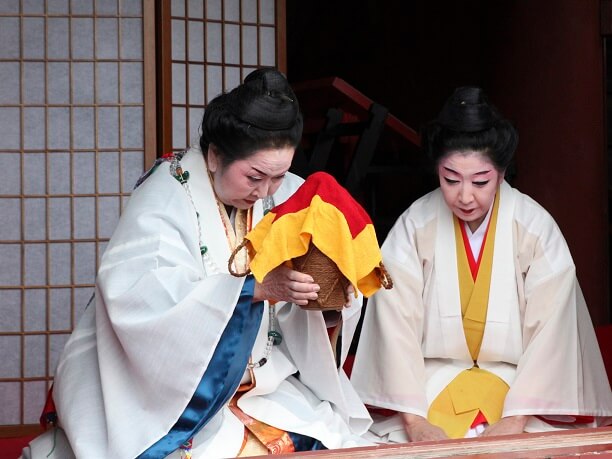 The “Feast of Hospitality,” which is carried out in the Shuri community center is free for anyone to participate in.
After the meet and greet with Ryukyuan dances, the line forms to take water from the Community Center to Shuri Castle.
When taking the walk from here to Shuri Castle, I think that it is possible to feel more deeply a connection to God.
When you finally arrive and are climbing the stairs of Shuri Castle with prayer along with water from the enkakuji Temple, It is easy to feel the importance of this celebration and you will feel very glad that you participated.

However, the location of the spring water where the ceremony is a little confusing. So please check out the way to get there ahead of time or hire a taxi to take you there. It is also possible to volunteer as one of the water bearers. Check out the following websites for more information.