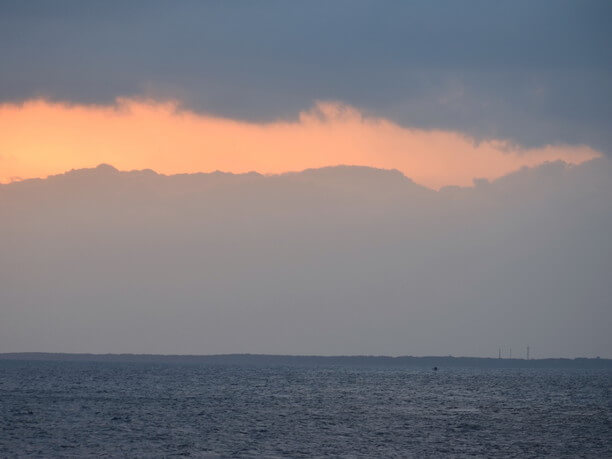 The island of healing, Okinawa.
It is not only the blue sea and the green mountains to wrap us who visit these islands.
The way of the living that has been inherited without changing is also one thing.
Here, in Okinawa, people’s living has been run along nestling close to rhythm of nature.

There are the traditional events inherited in each season according to the old calendar based on waxing and waning of the moon.
The lunar New Year to celebrate the beginning of the year is one of them.
Traditional manners and customs to celebrate New Year’s Day of the ole calendar are inherited in the various places in Okinawa.

This time, I visited Kudakazima island where is the nearest to the Niraikanai, and saw the state which the whole island was filled with the blessing in my own eyes.
It was the day to feel unusual gaieties strongly, like ancestral soul and spirits were all gathered by across the sea.

Kudakazima Island is about 11 miles away in a straight line in the southeast direction from Shuri castle, and it takes about less than one and a half hours from the center of Naha-city including waiting time.
This is known that many swimmers visit from the prefecture outside in summer because this is one of the nearest solitary islands from Naha.

At the same time, it is the place wrapped with the unique sense that seems to be connected to the ground and the sky when you get off a ship and start walking the island.

The Small Paradise which You Can Cross in only 15 Minutes. 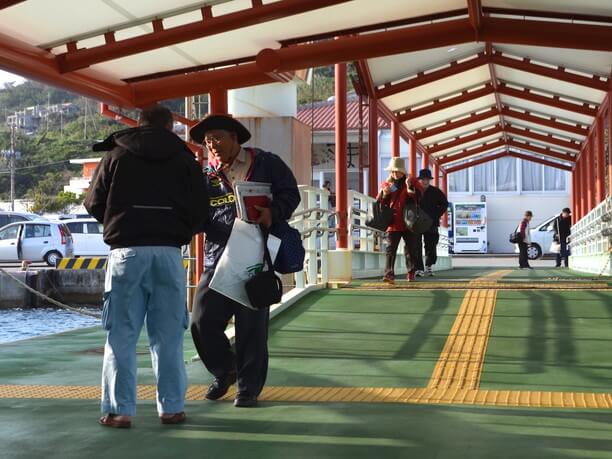 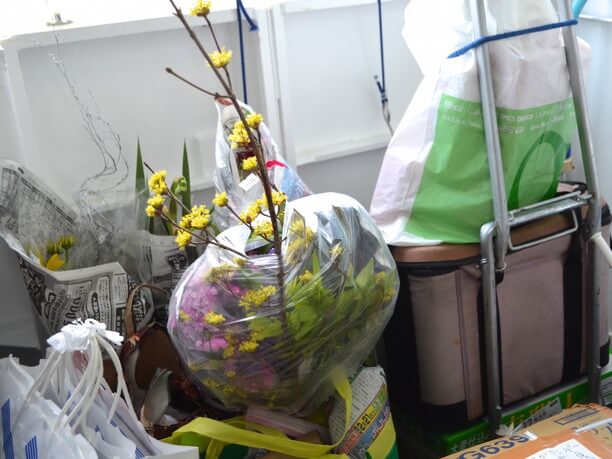 On February 19, this is equal to January 1 on the old calendar.
Because of the day which people visit the island the most in one year, a large number of people gathered in Azama port that a ship for Kudakazima island sail for.
I got in a temporary high-speed ship with homecoming visitors who held flower arrangement for New Year holidays and souvenir, and in 15 minutes, I arrived in Tokujin port which was lightened up by the morning sun.
Though it was only 3 miles away from the main island, the air was slightly different. 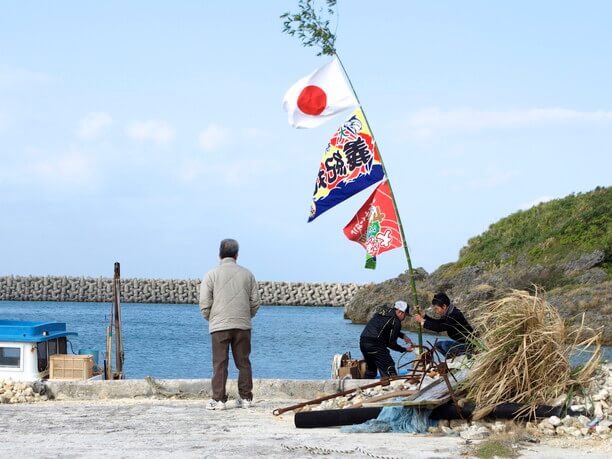 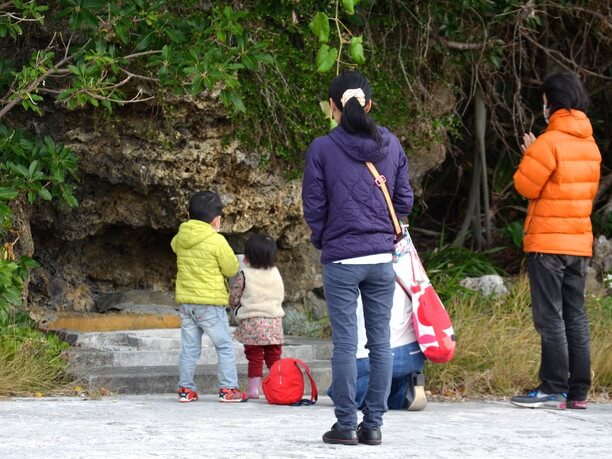 At the port, there was the young Uminchu, the Okinawa fisher man. They were dressing up a fishing boat.
They were fighting to tie a big catch flag and the national flag of Japan to the green bamboo, and to attach it near the bow.
In another direction, I saw the small child and family who kneeled and folded hands together in front of the worship space.
You can see thanks and prayer routinely in many places in this island 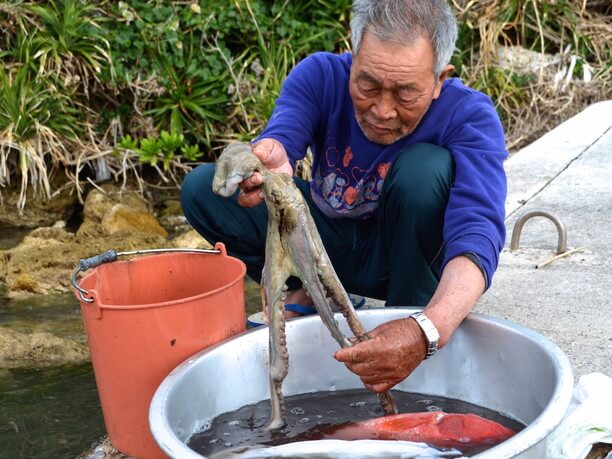 In the center of the port which the fisherman use for unloading, a white-haired old man was doing something with a tub, so I walked up to him.
He was washing the first catch for the New Year in water.
“It’s a big catch!” somebody called out.
“They were small though.” The old man answered as peeping out the joy on lips.
It was fresh scenery of the living that we could not see in the city.

The Island Filled with Blessing

By the way, the purpose of this visit is the cupbearer, called “Shakutui”.
It is held in Hokamaden which is one of the shrines in the island every year.
Kudakazima Island, a cup is exchanged between the gods and island’s people through the intermediation of godlike person called “Kaminchu” 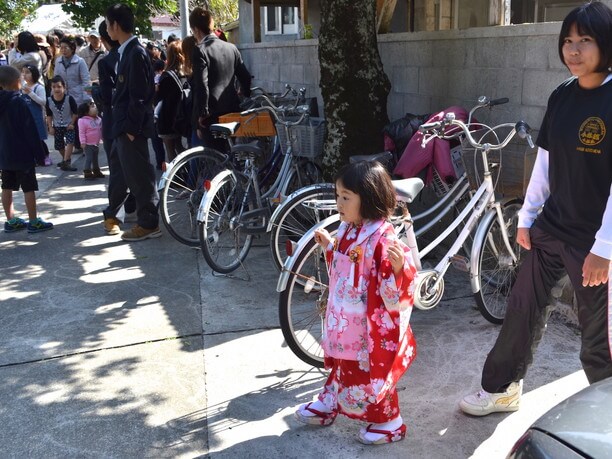 I walked the narrow and meandrous way between the houses where the national flag of japan was raised, and I arrived to Hokamaden.
Many tents were pitched in the open space in front of the main shrine.
The island’s people and people who are connected to Kudakazima Island waited for the beginning of the ceremony.
The elders were chatting about how they were doing in these years with beer and Awamori in their hands.
A grandmother was going to shrine with the family who met again after a long absence.

The lunar New Year is the time when this island with population only more than 200 becomes most lively in one year.
A large number of people from god to a baby come back to the island of god.

To the World from the Island, the Prayer of the Peace and Kachasi

I heard the tone of Sanshin, three-stringed instrument, when I admired the faces of people filled with blessing. 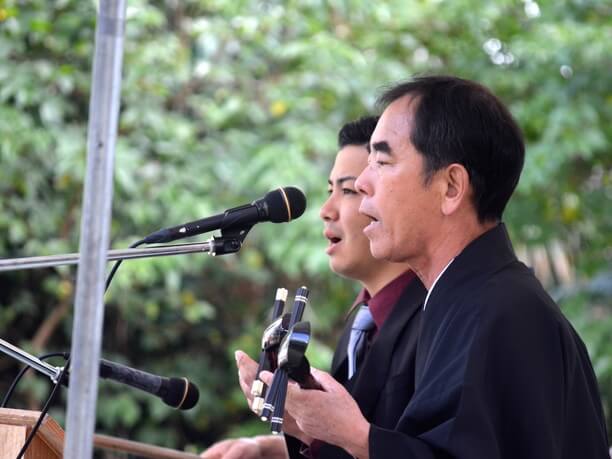 festive song echoed in the meeting place, and it was the opening of the ceremony of Shakutui.
Worshipers who formed a line toward the main shrine went up to the shrine in turn in pairs. Then they received a cup from a godlike person and prayed for the health and the safety for new one year.
After finishing Shakutui, they went down to the open space, and danced “Kachasi”.
“Kachasi” means stirring in Okinawa dialect.
They danced with moving their hands in all directions over their head and in front of their head like stirring.
“Kachasi” which was danced to the traditional folk song in up-tempo was so bright and uplifting.
It was suitable for the finale of the event. 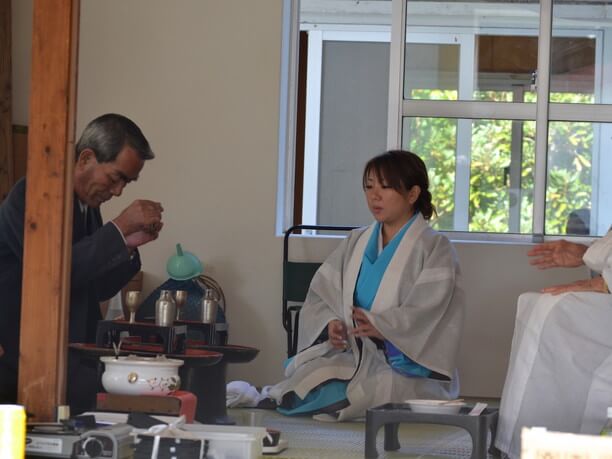 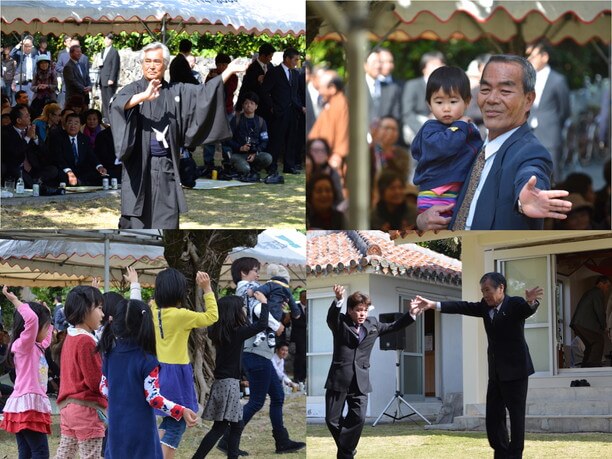 Because it was New Year, a man dressed in a suit and a tie, or another man dressed in a formal Japanese wear.
They danced “Kachasi” as expressing the joy with their whole body.
As watching men who sometimes pulled their great-grand child and kept dancing for a long time, I became to think that this ceremony is not only for Kudakazima Island, but also for the peace of the whole world.

A Noble Island of God

So, this is an island of prayer.
In Ryukyu Dynasty, the king had come to pray with the goddess to pray.

This is the place where Amamikiyo, the creation god of Ryukyu, started to make county first, and this island has a legend that the staple grains drifted to from paradise called “Niraikanai”.

There are many sacred place dotted in this island of god.
The ceremony of “Shakutui” should have wrapped us with happiness.

There is “Seifa Utaki” which is known as Okinawa’s best sacred place near Azama port. Please visit there before crossing to Kudakazima Island. I am sure you could get closer to the island.