Everyone wants to travel as cheap as possible. Even for the same destination, the rates significantly change depending on the date of the trip. Here are some tips for finding the cheapest time to travel and how to avoid busy travel days.

When is the possible cheapest time for travel?

In general, travel expenses are cheaper in times when there are few travelers. The majority of travel expenses are transportation and accommodation fee. The number of seats on the airplane and the number of hotel rooms will not change throughout the year. Airlines and hotels will lower their price and sell them rather than leaving them vacant. Simply put, when there are a lot of tourists, prices are high. When there are fewer tourists, prices are low. So we need to find the time when travelers get fewer.

When do travelers get fewer in Japan?

By using our data on the number of monthly travelers and the cost of travel per person, you can learn about the best time to travel to Japan. The data were obtained by counting only air travel using JAL (Japan Airlines). Since JAL has the largest market share in Japan, it accurately represents the prices as well as the trend of the overall domestic travel in Japan.

Monthly Trends of Number of Travelers and Prices in Japan
・January
First week is expensive due to New Year’s Holiday, but other than that it is quite cheap.

・February
Few people are traveling. Beginning of February prices are cheap, but gradually increase towards the end.

・March
Since March is a season of graduation trips and spring vacation in Japan, the number of travelers is the second largest after summer vacation time. However, the prices are not that high.

・April
There are fewer travelers, except for spring vacation: the beginning of April, and Golden Week holidays: usually the last week of April. The prices are cheaper and tend to be higher than in winter.

・May
Prices are higher during the Golden week holidays: usually the first week of May but other than that it is cheap though the prices tend to be higher than winter.

・Jun
Toward the summer, travelers gradually increase and the prices also gently rise.

・August
August is a peak travel month in Japan due to the summer vacation. Tour prices are the most expensive of the year.

・September
There is about the same number of people traveling in September as July, but travel expenses are cheaper than July.

・November
Few people are traveling. The prices are maybe the cheapest.

・December
Prices increase from winter vacation: usually last week of December toward the year-end. Traveling during year-end and New Year’s holiday is the most expensive and the most difficult to book a ticket. 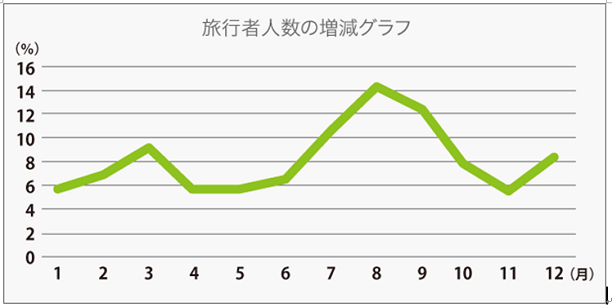 Again, the most people are traveling in August. Accordingly, the prices will be higher during the summer vacation time.
January, April, May, and November have less travelers. Correspondingly, these months are the cheapest time to travel.

When is the best time to visit Japan?

During the consecutive holidays such as summer vacation, Golden Week, and New Year’s holidays, the prices are especially expensive, although before and after that the prices are quite cheap. Also the price tends to be cheaper during the rainy season: usually in June and July.

However Japan has a lot of attractions throughout the year. If you are interested in attending special events and experiencing seasonal cuisine that can only be experienced during a certain period in time, consider your own purpose of travel and find the best time to do it!