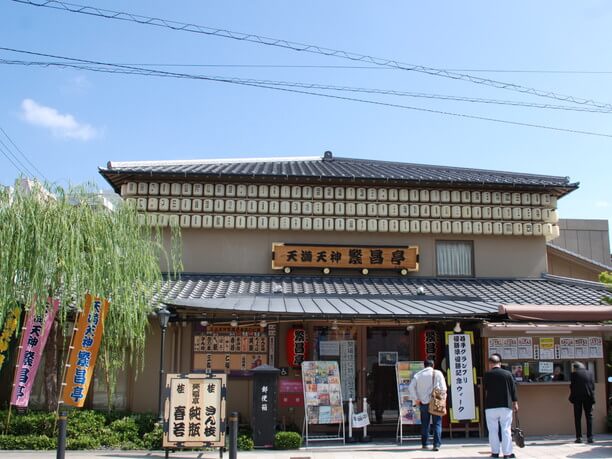 In 2006, Tenma tenjinhanjoutei was reopened for the first time after the War. The area is known for the nearby Osaka Tenmangu Shrine, that is located along the longest shopping street in Japan. Together these spots provide a lot of places for sightseeing. As it was made for rakugo, the hut is small with just 200 seats. The audience is so close to the performers they can feel their breath and see all their facial expressions. The performers change weekly. The show lasts three hours and is a combination of magic, conversation, and rakugo. In the evening there is usually just one famous performer and fans from far distances come to see their favorite performer.

You are greeted by the performers as you enter and leave the theater! 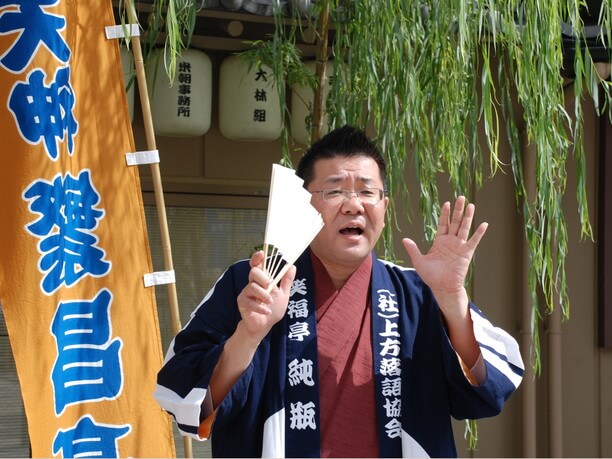 As 12:30 p.m. approaches the customers begin to form a line. Because it is a free seat, they are arranged in order with numbers written on their admission ticket. Then one of the performers of the day appears. He starts calling out, “afternoon seats will start” and that spurs the excitement. It is nice to be greeted by the rakugo performer this way. Furthermore, after the lunch session, the rakugo family who performed that day will see you off. This custom is the idea of Mr. Bunshi Katsura (桂文枝) who worked on the creation of the theater. Tenma Tenjinhanjoutei is a place for valuable contact between fans and rakugo families. Photos and autograph signing are welcomed!

The sound of the drum is the sign the theater is opening! 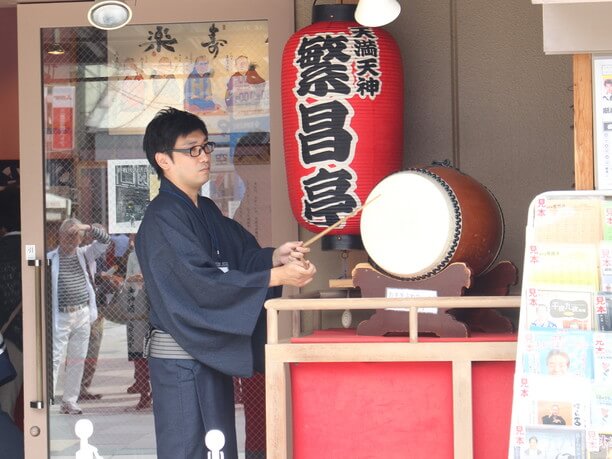 The sound of the drum which was placed in front of the entrance raises the expectation that the rakugo performance will soon be starting. 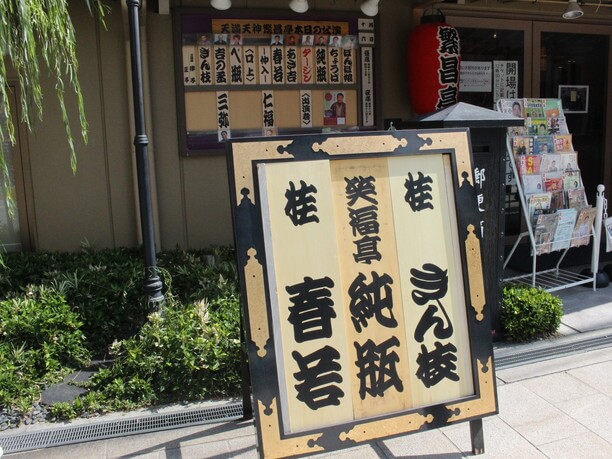 In front of the Tenma Tenjinhanjoutei the names of the rakugo families that will be appearing on that day are posted. Except for Shofukutei Tsurube (笑福亭鶴瓶), a famous performer who only stops in for surprise performances so his name is never on the sign. When suddenly Mr. Tsurube comes out to the stage without notice, the venue is surrounded by tremendous cheers and applause. 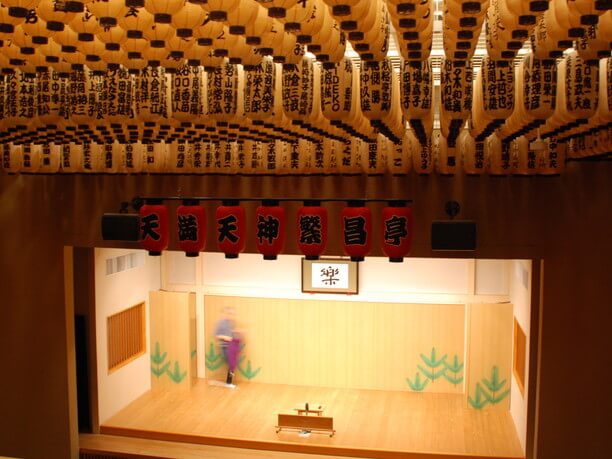 Tenma Tenjinhanjoutei was completed with donations from many companies and citizens. Lanterns with names of supporters are decorated on the inside and outside of the building, the number of which is around 1,500. The lanterns are lined up on the ceiling above the audience! This atmosphere they create enhances the feeling of enjoying rakugo even more. The theater was made just for rakugo, the distance between the stage and the audience seating is close, and you can feel the breath of the rakugo family no matter where you sit.

Wachawachaan is a free break room where you can get refreshments and learn about the history of rackugo.

Wachawachaan is a free resting place that can be used from 11:00 a.m. to 12:55 p.m. and from 4:30 p.m. to 6:25 p.m. before the day and night sets start. They have vending machines inside where you can buy food and drinks as well as exhibits that describe rakugo and Shochangtei’s history. 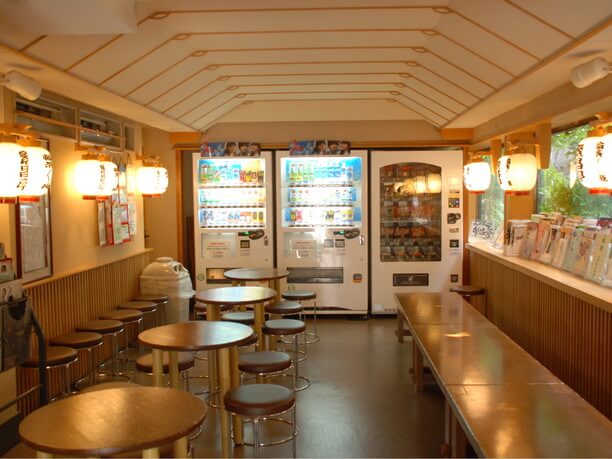 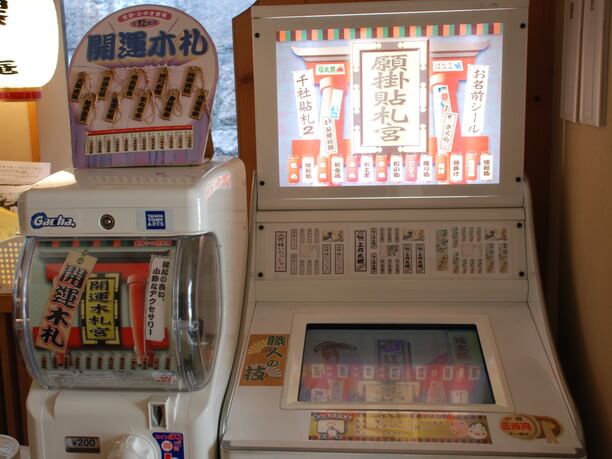 They also have a machine that can make original souvenir stickers. It is used frequently by tourists in commemoration of their visit. You can choose your favorite patterns, letters and fonts according to the machines instructions in a voice speaking the Kansai dialect. You can also enter your name, or put in your favorite motto. It costs 300 yen per sticker. It is likely to please as a small souvenir. 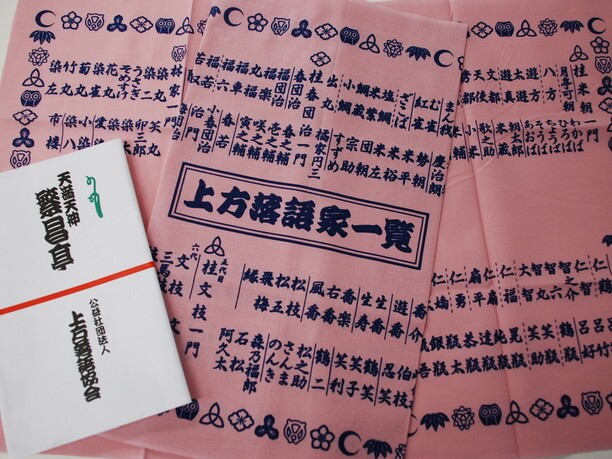 You can alo choose a Tenma tenjinhanjoutei Temple souvenir, it is a towel that has the name of the rakugo families written on it. It is interesting to note that there are about 250 of the rakugo families belonging to the Association of the Rakugo. The number of rakugo fans has increased since the reopening of the Tenma tenjinhanjoutei. “The number of people who aim to be a professional performer and those who enjoy storytelling as their hobby has also increased,” said the manager, Masakazu Onda (恩田雅和). The morning set requires a reservation, and is designed as a storytelling experience for special groups.

One of the pleasures is the story told before the rakugo starts called "makura." which is an original story by the performer. Since the stage is so close the audience really feels connected to the storyteller.