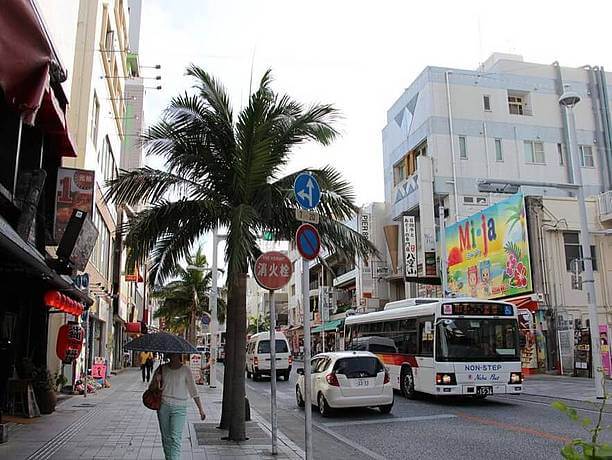 After you cross the scramble crossing in front of the Okinawa prefectural government building, a stone Shisa (a half dog and half lion statue that is said to keep evils away) welcomes you to the International Street.
The International Street is about 1.6 kilometers (about one mile) from the front of the prefectural government building in Kumoji, Naha-City to Asato and it is truly the main street for sightseeing!
There are souvenir shops, snack shops, T-shirt shops, Awamori liquor shops, craft shops that sell Ryukyu glass and yamuchin (pottery), Okinawa food restaurants, steak restaurants, and many more shops along the street.
After the dramatically quick revival from the war, this street earned another name -“Miracle Mile.”
There used to be an entertainment area with a lot of movie theaters for local people. There was a movie theater called the “Ernie Pyle International Theater” in the middle of the street. The name of “International” was taken after the name of the movie theater. Now, there is “Tenbusu Naha” instead.
The street has sweet shops that sell ice cream and mangos. You can enjoy strolling around, enjoying eating and shopping at the same time.
When you go one street to the back, you’ll see fashionable select shops and cafes.

The International Street has delicious sweet shops as well as many different kinds of souvenir shops all lined up for you. Eating around and comparing the tastes of the sweet shops are a lot of fun. Blue Seal Ice Cream is everyone’s favorite in Okinawa and there are many shops around the International Street besides the company shop Palette Kumoji. The single cone ice cream is reasonably priced at 300yen. They have Okinawa’s special flavors such as shiiquasa sherbet and beni-imo (purple sweet potato). The salt specialty shop “Masuya” has Yuki-shio (snow salt) soft ice cream (380yen) is popular, too. You can add the combination salt of your choice as a topping.
There are shops that sell local fruits and vegetables in season at the storefront and some shops have Mangos and pineapples in summer and purple sweet potatoes in winter.
How about walking around the busy and lively street, feeling the joy of eating good foods and choosing the best souvenirs of your trip?

The International Street is packed with shops for about 1.6 kilometers long (about one mile) and is a thirty-minute walk. You will need at least two hours to take time to enjoy shopping.
Walking from one end to the other may be tiring and you could take the Yui Rail if you know which shop or place you would like to go.
Choose the closest station from the Prefectural Office, the Miebashi Station, and the Makishi Station.
The Mie Station is a little far from the International Street, but you meet the Mutsumibashi Street that is the center of the International Street if you walk on the Oikei Street for five minutes or so.
They usually stop the traffic to have a transit mall from noon every Sundays and you may freely enjoy walking around without being bothered by a crowded street.
There are so many unique streets around the International Street such as the New Paradise Street, the Ukishima Street, and the Heiwa Street and the Shijo Street that lead to the Kosetsu Ichiba Market.
Venture into the streets.

The department store Okinawa Mitsukoshi was the symbol of the International Street. In March 2015, it was remodeled into HAPINAHA –the entertainment facility.
What they have is….
* The Yoshimoto Okinawa Kagetsu Theater to enjoy comedies for 365 days
* The Okinawa Hilarious Haunted House to have fun time that is full of wonders.
* The souvenirs and sweets zone has shops that have workshop-type programs. They are very popular among children.
* The Penguin Deli has “Ishigaki chili oil” that are popular among Okinawa gourmets.
* The Remote Island Marche has local foods and you make a good buy.
* Chuko Awamori Distillery has the Awamori Marche and you may enjoy your own blend of Awamori.

They have a great line-up of foods that would make perfect souvenirs as well as great entertainment.
This is the new symbol of the International Street. Come and enjoy! 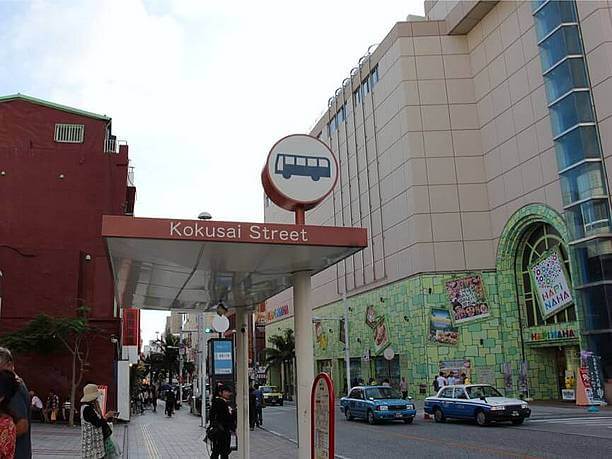 If you take a close look at the left hand side of the International Street from the Prefectural Office to Makishi, you’ll find narrow streets that go to the back between shops. You may wonder, “Oh!? Can we go through these narrow streets?” Yes, you can.
The area that has those streets is from Hotel JAL City to the back of “Hotel Yamanouchi” before the Okiei Steet.
It is like a little opening between the New Paradise Street and the International Street. 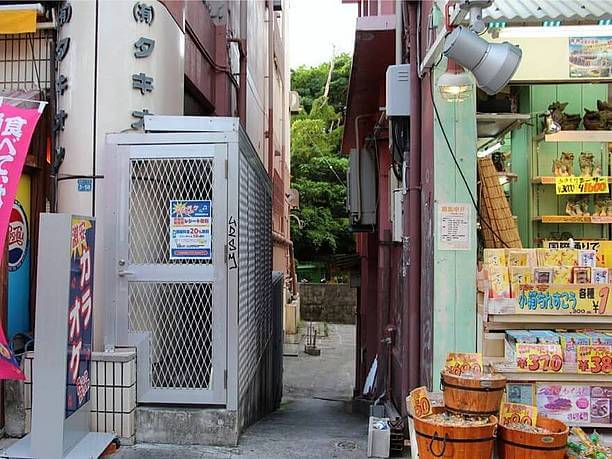 When you step into the back of the building and follow the narrow street, a space surrounded by greenery comes in sight.
You see a parking space, a narrow path with luxuriant vegetation, and even an old graveyard….
This is the space that was quietly left behind in the midst of the busy recovery from the war. You will be taken on a time travel to the Old Naha.
They plan to re-develop this area, so go and explore before it is gone. 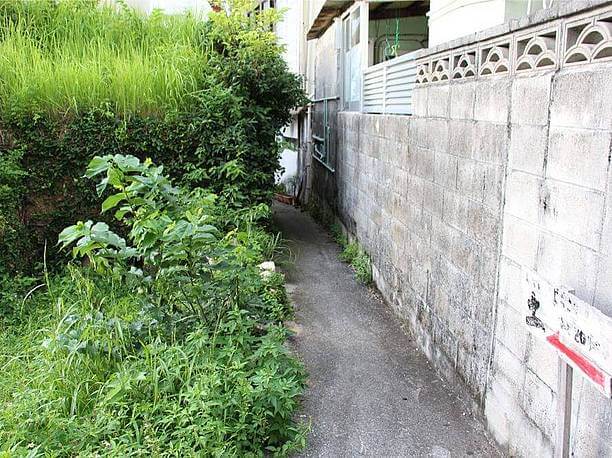 There are cafes, fancy goods shops, and select shops that are loved by locals behind the International Street on the northern side, on the New Paradise Street and the Ukishima Street that stretches from east to south.